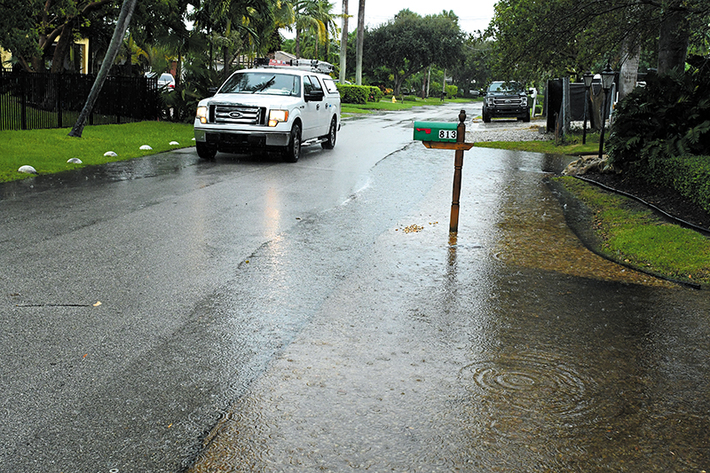 A heavy rain and high tides on Sept. 21 challenged all of the swales on Hypoluxo Island, including the rocky one that Patrick McGeehin created in his yard. Water was much deeper on some parts of the island’s drive. Jerry Lower/The Coastal Star

Patrick McGeehin, who lives on North Atlantic Drive — a street prone to flooding after heavy rains and king tides — came up with a swale idea.
Working with his landscaper, McGeehin put rocks in his swale and, sure enough, when the next heavy downpour hit the island, McGeehin’s swale drained the water and kept the street outside his property flood-free.
His plan worked, he said, but the rocks violated the Lantana town code and he was cited. Rocks, no matter how attractive he made them, were not among the town-approved materials to be used in a swale.
Then McGeehin had another idea. He would petition the town to amend its maintenance and appearance standards for swales to allow for the rocks. His appeal came before the Town Council on Aug. 23 and, as it turned out, council members thought his swale idea was a swell idea.
They gave McGeehin the ordinance change he sought, although for now at least, the change applies only to Hypoluxo Island. If it works for residents there, the change in standards could be extended townwide.
Mayor Robert Hagerty also said the changes to the code could be zone specific.
McGeehin said the change he asked for would give homeowners some flexibility to use rocks in their swale.
“My house was finished in 2008 or 2009, so it’s up higher,” he explained. “Where my driveway comes down it’s very steep as it comes down to the road and at the bottom. There’s a big swale area that captures the water to not allow it to go into the street and flood.
“With the king tides and with what’s going on with climate change we’re getting a lot of water on North Atlantic Drive. The problem was, with all the water that’s laying there, it turned out I was having a big mudhole there. You could not maintain grass, which was the required material that was in the swale area. Not knowing there was even an ordinance, I put some rocks in there.”
McGeehin showed photos of his swale and the road after a heavy rain, where the water in front of his home did not go into the street while the water in the neighbors’ swales, without rocks, flooded the street.
“The objective I think should be that you keep your water on your land, if you can,” he said. “In my view, this holds water better. Even if you had sod there, it doesn’t drain as well and the water goes out into the street. It would still require a swale permit.”
His swale solution wouldn’t work everywhere, he said. “A property that runs flat might not be a candidate for stone, because stone might get into the street and become a nuisance over time. I’ve had this up for several months now and have had no problem because it’s a ditch. It’s not going anywhere. Aesthetically it looks better, too.”
Council member Lynn Moorhouse said he liked McGeehin’s idea for the island.
“As you know, the properties over there are raised and people are wanting to have the streets repaved every year and griping when there’s no place for the water to run and they’re not willing to put a swale in.
“I do think we need to tweak the ordinance like with approved decorative stone maybe of a certain size because when you get into pea rock and small stones it’s going to be all over the place,” Moorhouse said. “What he has done, I’m all for and we’re getting the water off the road.”
Council member Karen Lythgoe agreed. “I like what he’s done. I’d like to see a way to let him keep it. … You can never keep grass in a swale. It’s under water all the time.”
Although the council agreed to authorize the text change McGeehin requested, it made a few changes of its own, including that the minimum depth of the stones would be 6 inches.
That means McGeehin would still be in violation since the stones in his swale were only 3 inches deep. He would need to add another 3 inches to comply with the town’s revised code. Then, his rocky swale can stay.
In other action, the council granted a special exception request from Jeremy Bearman to allow for a restaurant over 2,500 square feet at 225 E. Ocean Ave. Bearman and his wife, Cindy, operate Oceano Kitchen at 201 E. Ocean Ave. and would like to open a restaurant in the new location, formerly home to Mario’s Italian restaurant.
Bearman’s request was met with enthusiasm from the town, including Moorhouse and Lythgoe, both regular customers of Oceano Kitchen.
“I’m spending my daughter’s inheritance at your restaurant,” Lythgoe gushed.
“I’m thrilled to death about his plans,” added Moorhouse.
Mayor Hagerty added his support.
“We look forward to having you at that place,” Hagerty said.
Bearman plans to keep his current restaurant running as well, and said he hopes to open the new larger restaurant in four or five months after tackling renovations and permitting issues.
At the Sept. 13 meeting, the town gave Bearman some relief on parking requirements. Current code calls for 49 parking spaces on site. The variance approved reduces that number to 18.
In 2019, Lantana revised its parking requirements for restaurants, reducing the number of spots by slightly more than half in an effort to attract more businesses to the downtown.
“There’s plenty of parking,” said Chamber of Commerce President Dave Arm. “The current code is still too restrictive.”
Additional spaces are available at Lyman Kayak Park, less than a block away from the restaurant.
Moorhouse agreed. “I’ve never had a problem parking. You can always park at the tennis courts.”
• The council authorized Shoreline Green Market to expand to twice weekly shows at the Recreation Center, 418 S. Dixie Highway.
Hours on Fridays will be from 5:30 p.m. to 9:30 p.m. Sunday hours will be from 10 a.m. to 2 p.m.