Several seawalls, pools and yards in Manalapan were seriously damaged by the constant pounding of the surf from Hurricane Sandy and seasonal high tides.  Jerry Lower/The Coastal Star

No hurricanes have hit southern Palm Beach County this year. But, it’s those breeze-by storms off the coast that oceanfront residents have to fret over.
In August, Hurricane Isaac dumped torrential rain on the area as it motored into the Gulf of Mexico.
In late October, as Hurricane Sandy advanced north off shore, its ripple effect chewed into seawalls, flooded streets and swimming pools, toppled lifeguard stands, ripped away beach stairs and crossovers and toppled a new bride into surf.
“We’ve never seen high tides, a full moon and wave action like that,” said South Palm Beach Town Manager Rex Taylor. “It’s a bad combination.”
High tides are typically higher during a full moon and the storm surf churned by Sandy added two to three feet to the extra high tides, according to estimates by the National Oceanic and Atmospheric Administration, measured at the Lake Worth pier.
Worst hit were the seawalls that protect more than 30 oceanfront estates along the 1.6 miles of beachfront between the Ritz-Carlton Resort to Chillingworth Curve in Manalapan.
Portions of several seawalls collapsed and a swimming pool near the 1300 block of South Ocean Boulevard was washed away. A seawall failed at 820 S. Ocean Blvd., allowing the lawn to wash into the surf, said oceanfront resident Donald Silpe.
He also confirmed that the seawall at musician Yanni’s property collapsed and the pool was washed out. “The problem is that if one seawall fails it puts in jeopardy the ones next to it,” Silpe said. “This is the worst I’ve seen and I’ve lived on the ocean for 32 years. When the water hits my seawall it splashes up 18 or 20 feet into the air.”
Manalapan town officials declared a state of emergency Oct. 29, enabling the issuing of emergency permits for seawall repairs and for sand replacement. Permit fees were waived and work hours were extended. 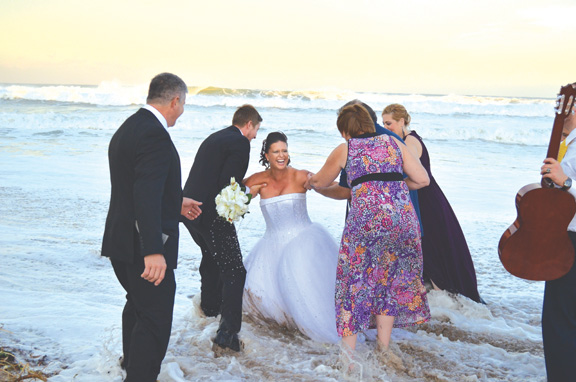 Husband, Jean, and family and friends help bride Kaylee McClure Forim after a wave swept her off her feet during a wedding photo shoot on the north end of Delray Municipal Beach. Photos by Jerry Lower/The Coastal Star

Storm effects across the area:
South Palm Beach: Several condominiums lost beach stairs and some parking lots were flooded during high tide. “Huge waves came up two hours after high tide (Sunday morning) and washed the stairs away, brand new stairs,” said Imperial House resident and Town Councilwoman Bonnie Fischer.
Lantana: The lifeguard stand that guarded the beach for 26 years washed away in the Sunday morning confluence of high tides and high surf. Storm surge also flooded the Lantana beach parking lot and forced the Dune Deck restaurant to close.
“We got one big wave over our awning into the restaurant and both kitchens,” said Costa Panais, co-owner of the restaurant. “When we got that cleaned up, three more waves came. We decided to close for the day. We can’t risk our customers. Nobody can fight Mother Nature.”
Sportsman’s Park on the southwest side of the Lantana Bridge was flooded and the dock at the nearby marina was submerged temporarily, said Lantana Police Chief Scott Scheller. Several streets near Ocean Avenue also flooded.
Portions of Atlantic Avenue on Hypoluxo Island were flooded where a drainage project is currently under way.
Manalapan: State Road A1A in front of the Ritz Carlton flooded several times during high tides, prompting police to place orange cones to direct traffic around the water. The Ritz’s underground parking garage flooded and its seawall stairs and railing washed away.
Ocean Ridge: Ocean Avenue and nearby residential streets just east of the bridge flooded from tidal water backing up from the Intracoastal Waterway through the storm drainage system.
Inlet Cay and Spanish River drives also flooded from the Intracoastal, Ocean Ridge Police Chief Chris Yannuzzi said.
A man riding a personal watercraft off the Ocean Club was rescued by a Palm Beach County lifeguard Friday night, Yannuzzi said.
Waves crashed over the deck at the Ocean Liner motel and apartments sending debris onto Old Ocean Boulevard.
“These are the highest waves and surge I’ve ever seen since I’ve been here, including [Hurricanes] Frances and Jeanne in 2004,” said Yannuzzi, who has worked in the south county for 32 years.
Briny Breezes: High tides breached the mobile home park’s Intracoastal seawall, scouring sand and lawn from behind the retaining walls, said Briny Breezes Inc. President Mike Gut. Many residents lost cable television but he was not aware of any loss of electricity.
Gulf Stream: Some oceanfront parking lots and patios flooded during high tides and some pools had sand deposits, said Gulf Stream Town Clerk Rita Taylor but no structural damage was reported.
Delray Beach: Streets off A1A flooded, especially north of Linton Boulevard, leaving standing water for hours and forcing some residents to wade out of the neighborhood.
Bride Kaylee McClure and Jean Forim were nearly washed to sea when a huge wave interrupted their wedding vows on the Delray Beach waterfront.
“I was just saying ‘In the eyes of God’ and whoomp, we got swamped,” said Mitchell Cohen, who was officiating at the beachfront wedding.  “He’s pretty powerful. We felt his fury.”
The newlyweds took it as a good omen. “Once the ceremony ended, another wave came in and nearly swept her off her feet,” said groom Forim. The couple was facing the beach and didn’t see the breaker coming. The tiny ring bearer and the flower girl were doused.
“We took it in a positive way. “The ocean was blessing us, washing us off,” Forim said.
The newlyweds took no more chances with storm Sandy. They are honeymooning in Seattle.
Highland Beach: Beach erosion was extensive and town officials called in state Department of Environmental Regulation representatives to inspect the damage, said Zoie Burgess, assistant to the town manager.
A police officer investigating a possible drowning during rough seas was slightly injured when a wave washed the ground out from under him. The drowning was unfounded.
During a workshop meeting Oct. 30, Highland Beach commissioners discussed declaring a state of emergency to help expedite state and town permitting so repairs could begin immediately. The commissioners also showed support for waving permitting fees for repairs cause by the storm.
Residents expressed concern that additional property damage could occur if repairs were not made quickly.
“It is gut wrenching to see the tide come up and take a piece of your property,” resident Al Giachetti told commissioners.
Boca Raton: “We know we had some significant beach erosion,” Assistant City Manager Mike Woika said. “Our storm damage was pretty much contained to the beach.”
Storm erosion did force lifeguards at Red Reef and beaches south of Palmetto Park Road to work out of temporary locations (tents and picnic cabanas) when the steps to their guard towers washed away.

Mary Kate Leming and Rich Pollack contributed to this story