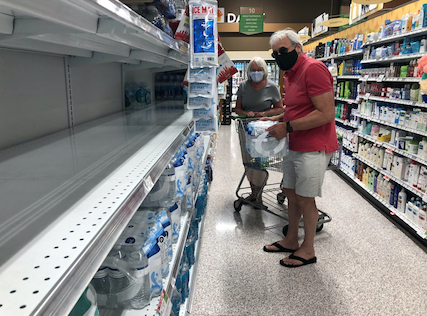 Kristin and Frank Augustine were among several South Palm Beach customers in a matter of minutes to buy drinking water on Memorial Day at the Publix in Plaza del Mar. Right after they did, an employee restocked the supply with 14 cases of bottled water. Jerry Lower/The Coastal Star

South Palm Beach Mayor Bonnie Fischer says the city of West Palm Beach has to do a better job of notifying the town’s water customers when problems arise.
It took West Palm officials about eight days last month to announce that the city’s water had an unacceptably high level of the blue-green algae contaminant cylindrospermopsin and posed a risk to physically vulnerable customers.
“It’s very concerning,” Fischer said. “It was happening long before we knew about it and people had been drinking it for days. That’s the most concerning thing.”
West Palm Beach Mayor Keith James defended the city’s response during a news conference on May 30, saying it took eight days to confirm the problem with testing.
“I’m aware of the concerns expressed that the city should have informed the public sooner,” he said. “We stand by our decision to test to confirm the initial high test results, those supplemental confirmation tests, and we could not tell the public until we received guidance from the Florida Department of Health.”
James said not all utilities test for the toxin and that the Centers for Disease Control and Prevention doesn’t list it among the worst contaminants. He said the advisory applies only to people with health conditions and children. He expected the advisory to not drink the water to last until the first weekend in June.
“This is uncharted territory for not just the city, but also for the state,” said Poonam Kalkat, West Palm Beach Public Utilities director.
Even after West Palm Beach officials disclosed the problem on May 28, South Palm Beach’s residents were left in the dark. Fischer said they didn’t receive text messages or robocalls from the Palm Beach County Health Department, though West Palm Beach residents did.
“It’s disturbing,” she said, “and it’s happened before.”
Over Thanksgiving weekend in 2019, a water main break in the town necessitated a boil-water order from health officials. To notify South Palm Beach residents, Fischer had to print out flyers and take them to each condo building. This time, sheriff’s deputies distributed the flyers.
South Palm Beach and Palm Beach get their water from West Palm, which opened several distribution sites for bottled water but none of them on barrier islands. Customers emptied the shelves of water products at the Publix at Plaza del Mar once they got word of the contamination.
South Palm’s Town Council has been looking for better ways to communicate with residents by phone or internet alerts, and the water problems figure to intensify the effort.