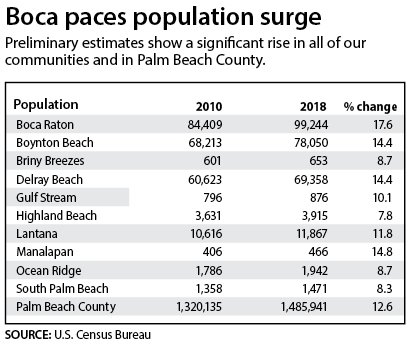 The numbers are in: Crime | Property Values

U.S. Census Bureau estimates show Florida’s population has increased from 18.8 million in 2010 to 21.3 million last year, cementing the state’s position as the nation’s third-largest behind California and Texas.

Palm Beach County’s population jumped 12.6 percent during the same time period to nearly 1.5 million, the Census Bureau reported in May.

Boca Raton added nearly 15,000 residents, more than any other city in the county, to bring its estimated population to 99,244.

Politicians in high-tax states, including New York, New Jersey and California, and local real estate experts point to the tax overhaul as helping propel the growth because it placed a $10,000 cap on deductions of state, local and property taxes on federal returns.

The legislation included the cap on the so-called SALT deduction as a way to pay for some of the $1.5 trillion tax cuts for individuals and corporations.

The impact of the cap can be substantial. Citing the Tax Institute at H&R Block, Bloomberg reported in January that a New Yorker with $10 million in ordinary income and a $10 million home would have saved $1,173,278 in total taxes by relocating to Florida on Jan. 1, 2018, when the tax law took effect.

An analysis by the Partnership for New York City, which represents the city’s largest private-sector employers, showed that a family of four that earns $175,000 in the city will pay 25 percent of its income in taxes, compared to 14 percent for the same family in Florida.

A married Floridian making $10 million gets $227,619 in tax relief, while a married New Yorker is hit with a $257,177 tax hike because of tax deduction cap, according to the analysis.

New York Gov. Andrew Cuomo blames the tax law for driving people out of the state and causing a $2.3 billion state budget shortfall. He mentioned Florida as an attractive option for New Yorkers unhappy with the law, The Wall Street Journal reported in February.

Congressional Democrats have introduced several pieces of legislation to roll back the deduction cap.

The Joint Committee on Taxation, Congress’s nonpartisan tax scorekeeper, determined in June that a cap repeal would lower the tax burden of those with income of at least $1 million by $40.4 billion.

“It is very real,” Jay Phillip Parker, CEO of Douglas Elliman Florida, said of the migration of affluent people from high-tax states to Florida because of the tax overhaul.

“There was a slow trickle after (the tax law) was released,” he said. “But the implications didn’t come into full effect until this year.”

Parker thinks the outflow to Florida, especially from New York, Connecticut, New Jersey and California, will continue to increase. “We think we are in the first inning of a long game,” he said.

The Residences is the type of project that would benefit from affluent people fleeing the Northeast. Penn-Florida has not released sales figures.

The tax law change “is driving a lot of our business,” said Jeffrey Levine, president of the Realtors of the Palm Beaches and Greater Fort Lauderdale.

“We are seeing a lot of relocation (from the Northeast) in my office,” he said. “Other agents are all saying the same thing.”

Kelly Smallridge, CEO of the Business Development Board of Palm Beach County, said she has seen an increase in people and companies interested in relocating to avoid high taxes.

“Our phones definitely are ringing from companies looking to escape the high-tax environment,” she said. “It certainly doesn’t hurt that we have the best quality of life in Palm Beach County.”

Many of those migrating to Florida have high incomes.

A Bloomberg analysis of data from the Internal Revenue Service and the Census Bureau, published in May, found that Florida was the top recipient of a wealth exodus from 18 states. Incomes from people moving into the state were $17.2 billion more than the incomes of those leaving the state.

New York, Illinois and New Jersey contributed a total of about $8 billion to Florida’s income base.

New York’s annual net loss was the nation’s highest, with $8.4 billion leaving the state. Exiting incomes of $19.1 billion were replaced by people who brought in $10.7 billion less in income, according to the Bloomberg analysis.

Although there is no debate that the SALT cap has played a role in pushing people out of high-tax states, some contend the impact has been overblown. But there’s little hard data yet because the cap’s effects have drawn attention only recently.

The University of Florida’s Bureau of Economic and Business Research surveyed about 6,000 Florida residents last year on their primary reason for moving to Florida. Family and marriage were cited by 33.5 percent, climate and weather by 26.7 percent and a new job or job transfer by 13.6 percent.

They were not asked about taxes. But they were asked about low cost of living, which those surveyed might have selected if taxes were a key issue. Only 3.4 percent cited that as their primary reason.

“For some, (the SALT deduction cap) could be a motivating factor,” said Rich Doty, a research demographer for the bureau. “3.4 percent indicates it as not as big a factor as some say.”

He also questioned the economic benefit to the state if wealthy people come for whatever reason. Many of those relocating to Florida are retirees, and while they will buy houses or condos and boost the local economy, their overall impact might not be that significant.

“A lot of the retirees who are coming aren’t looking to invest in local businesses,” he said. “They are looking to retire.”

Further, Florida has always attracted people from other states. The obvious selling points are no state income tax, warm climate, ocean vistas and a lower cost of living than in many other parts of the country.

There’s also the question of why people are moving now, when a number of states and cities have levied heavy taxes for years. Some think the SALT deduction cap is the straw that broke the camel’s back, pushing people who were on the fence to act.

Jack McCabe, CEO of McCabe Research and Consulting in Deerfield Beach, believes that people in high-tax states are relocating and that the SALT deduction cap is one of the reasons.

But he also cites Florida’s pre-existing advantages, including no state income tax and luxury homes that cost about half as much as they do in the Northeast.

Incoming residents “get a better value and lower taxes,” he said. “And they have the sunshine and the water.”

Levine suggested that the UF bureau conduct a new survey. “If they did the study today, it would be a big difference,” he said. “The people contacting us did not see the effects of the tax law until the later part of 2018.”

The U.S. Census Bureau’s most recent state-to-state migration data showed that more New Yorkers came to Florida in the previous year than from any other state. They numbered nearly 64,000, followed by nearly 39,000 from Georgia, nearly 32,000 from Texas, nearly 31,000 from California, and nearly 29,000 each from Illinois and Pennsylvania.

“Boca’s population is increasing because more and more people realize what an attractive place this is to live, work, raise a family, play, learn and retire,” said Mayor Scott Singer. “We are going to continue to see growth as long as our brand remains strong and people see the many virtues of living in Boca, especially compared to higher tax and older cities.”

The city prides itself on its low tax rate and the quality of its schools.

Singer also noted that about half of the corporations with headquarters in Palm Beach County are located in Boca Raton. One of them, Modernizing Medicine, is adding 850 high-paying jobs over the next five years, he said.

Although it did not add as many people as Boca Raton, Jupiter had the county’s highest population increase since 2010 by percentage at 18.5. The town added just over 10,200 residents, bringing the total to 65,524.