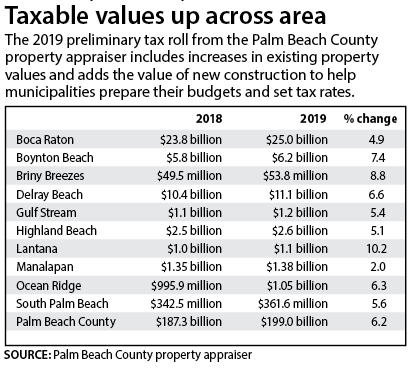 The numbers are in: Census | Crime

While the taxable value of Palm Beach County properties has risen for the eighth year in a row, the rate of growth continues to slow.

Countywide taxable property values increased 6.2 percent to $199 billion this year, down slightly from 6.5 percent last year, according to the 2019 preliminary tax roll that the Palm Beach County Property Appraiser’s Office has submitted to the state.

The total market value of countywide properties is now $277.6 billion, up from $264.7 billion last year.

“The slow and steady increase of the last three years will probably continue next year,” she said.

Sales prices are rising along with taxable property values.

New apartment complexes are responsible for a significant part of the $2.6 billion of new construction added to the tax roll, including 20 last year and another 11 this year, Jacks said.

The hotel industry is seeing its best years since the 1960s, she said, with a dozen new hotels added to the tax roll this year and next. Warehousing also is strong.

“The downtown cores continue to do very well,” most notably in Boca Raton and Delray Beach, Jacks said.

Boca Raton’s taxable property value, at $25 billion, outpaces every other city and town in the county. By comparison, West Palm Beach’s taxable value is $13.6 billion.

Boynton Beach Mayor Steven Grant views the percentage change as minor, since Delray Beach property values have increased more than those in his city.

But he noted that Boynton Beach this year exceeded its previous record-high 2009 property valuation and now has reached $6.2 billion.

“That is something I am very happy about,” Grant said. “It looks like we are growing at a reasonable rate. Based on actual property valuation numbers, we are not growing faster than we should be.”

The overall growth leader in south Palm Beach County last year was Manalapan, whose values jumped 10.5 percent to $1.36 billion. This year, its percentage growth dropped to 2 percent, although its taxable value rose slightly.

Town Manager Linda Stumpf could not explain the percentage rate drop but was not concerned about it. New construction added to the tax roll was $22 million, down only slightly from last year.

“Our location is extremely attractive and I think the Property Appraiser’s Office recognized that,” said Town Manager Dale Sugerman.

Taxable values increased in all of the county’s cities and towns. Those with biggest percentage increases were Mangonia Park with 11 percent, Glenridge and Lake Worth with 10 percent, and Palm Beach Gardens with nearly 10 percent.

Local governments use the tax roll numbers to calculate how much property tax money they can expect in the coming year so they can set their annual budgets and 2019-2020 tax rates.

That process will end in about mid-September, before the Oct. 1 start of the new fiscal year.

An increase in taxable value means that the county, cities and towns will collect more money from property owners even if they keep their tax rates the same as last year.

Elected officials can increase tax rates even though property values have risen, but they typically don’t want to anger taxpayers by doing that. They often opt to decrease the rate a small amount so they can say they have lowered taxes even though their tax revenues will rise.