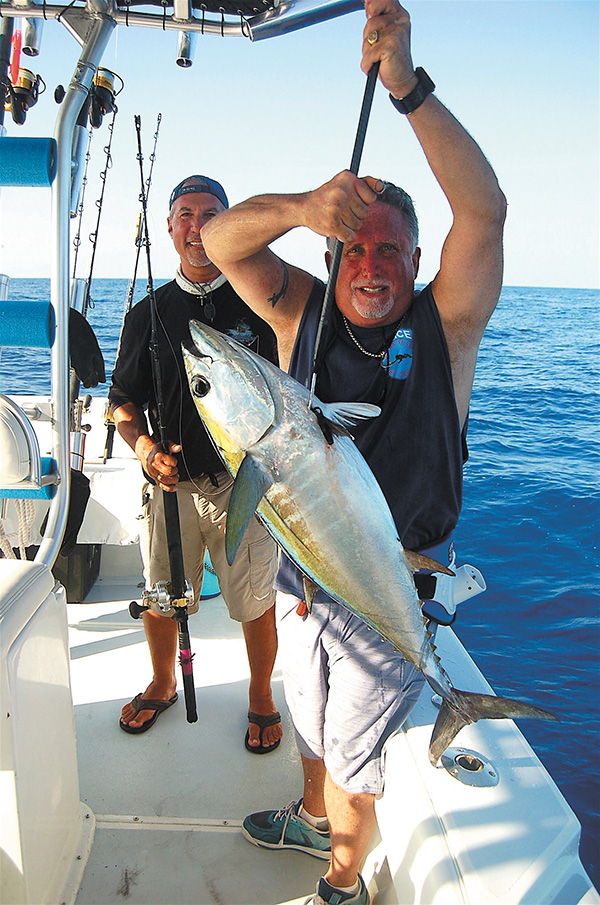 Finding birds (red splotches) on radar is the key to finding schools of feeding tuna. 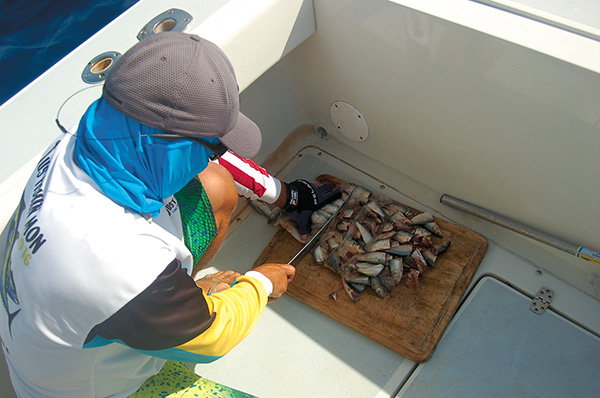 Chunks are tossed out one by one, creating a trail for the tuna to follow.

Finding birds on radar is the key to finding schools of yellowfin tuna near Grand Bahama Island — an easy-to-reach destination for South Florida boaters when seas are calm.
Feeding tuna leave scraps for small sea birds such as sooty terns that follow the schools around the surface of an otherwise nondescript ocean.
Recognizable by their large wingspans and forked tails, frigate birds tend to circle high over pelagic fish in hopes that small baitfish, such as flying fish, will be pushed to the surface.
The frigates tend to be the first birds that anglers spot soaring high in the sky when they look for schools of yellowfin tuna in Northwest Providence Channel south of Grand Bahama Island. Flocks of smaller birds often congregate under frigate birds.
Capt. Mike Simko, of North Palm Beach, led our small group of anglers to several yellowfin tuna during a Memorial Day boat trip to the Bahamas.
We left Lake Worth Inlet aboard Simko’s 35-foot boat, the KiteKeeper, and arrived at midday to clear customs and immigration at the Sunrise Resort & Marina near Freeport.
After securing our rooms for the night and eating lunch, we headed south into the deep, blue water of Northwest Providence Channel.
Everyone watched the horizon, looking for birds, while Simko tweaked the radar on his boat to search for birds. Dan Friedman, of Delray Beach, stood in the bow, scanning the horizon with binoculars.
It wasn’t long before birds appeared as small splotches on Simko’s radar screen. They appeared and disappeared as the flocks rose from the surface, then settled.
As Simko ran the KiteKeeper toward the birds, we readied frozen sardines, which had been cut into thirds for chunking.
When the boat neared the birds, we began to pitch out the sardine chunks, one by one. Simko slowed, then stopped his boat about 100 yards from the birds. A few tuna leapt from the water as they fed under the birds, which were working up and down over the surface as they followed the moving tuna.
As we slowly pitched out sardine chunks, Simko and  anglers Dan Friedman, his son, Eric Friedman, of Boynton Beach, and Rush Rashidi, of North Palm Beach, set out lines rigged with live sardines and goggle-eyes — live bait we had brought from Palm Beach County.
After a few minutes of chunking, Simko buried an extra-strong 8/0 circle hook into one of the sardine chunks, set the rod in the rod holder and slowly pulled off line so the hooked chunk would sink slowly just like those we had pitched overboard.
Simko caught the first tuna of the afternoon on a conventional rod rigged with 80-pound-test braided line and 50-pound fluorocarbon leader. Yellowfin tuna are powerful fish. They test tackle and the strength of anglers.
After moving several times and tossing out sardine chunks, Eric Friedman caught another substantial yellowfin on a live bait after a taxing fight using a spinning rod rigged with 50-pound-test braided line.
Mission accomplished: We had a few nice tuna in the boat on same day we had left Palm Beach County.
Sharks proved to be one of our biggest challenges. They cut the leaders during fights with several tunas, causing us to lose the beautiful, delicious yellowfins.
After we spent the night at Sunrise Resort & Marina, Simko ran the KiteKeeper back to Northwest Providence Channel on the morning of May 30 to fish for a few hours before heading back to Florida.
We boated a few more yellowfin tuna, but others were taken from us by sharks. We lost one to backlash on a reel that wasn’t adjusted correctly before the tuna hit.
Several members of our group slept in bean-bag chairs on the deck of the KiteKeeper as Simko ran the boat back toward Florida. We spotted cargo ships and a Coast Guard cutter on the open ocean.
Singer Island condos appeared on the horizon about 16 miles from Lake Worth Inlet. We ended our trip around 3:30 p.m. the day after we had left Florida, leaving us plenty of time to clean fish and organize our gear before heading home.

Florida boaters planning a fishing trip to the Bahamas
Visiting boaters must clear customs and immigration at the nearest port of entry. Boaters must fly the yellow quarantine flag and notify customs when they arrive. Only the captain should leave the boat until it has been cleared. Everyone on board must present a passport and complete an immigration card.
Boats up to 35 feet must pay $150 for a Bahamas cruising and fishing permit. (For boats over 35 feet, the fee is $300.) The permit is good for two trips within 90 days. (For details, search the Internet for a copy of the Bahamas Boating & Fishing Guide or call the Bahamas Tourist Office at 954-236-9292.)
When returning to Florida by boat, the boat captain must report the arrival to U.S. Customs and Border Protection by calling 800-432-1216. CBP offers local-boater options (through the Small Vessel Reporting System) that can speed up the check-in process.
Anglers bringing tuna back to the United States should have an Atlantic HMS Angling Permit for the boat, available online from NOAA Fisheries. Only one day’s catch should be onboard. (That’s three yellowfin tuna per person.)
Tuna must be intact so they can be measured. The minimum size for yellowfin tuna is 27 inches curved-fork length, measured from the tip of the upper jaw along the curve of the body to the fork of the tail. 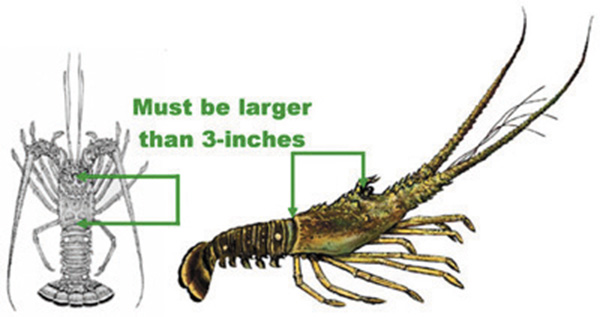 Two-day sport lobster season set for late July
This year’s two-day sport lobster season for spiny lobster is July 26-27.
A saltwater fishing license and lobster permit are required unless you’re exempt.
The daily mini-season bag limit is 12 lobsters — except in Monroe County and Biscayne National Park, where the daily sport-season limit is six.
A lobster’s carapace, or head section, must measure more than 3 inches to be legal to keep. Divers must carry a lobster-measuring device and measure lobster under water.
Egg-bearing lobster must be released.
Red-and-white dive flags are required by law.
Boaters must stay 300 feet away from dive flags on the open ocean and 100 feet away in inlets, rivers and navigation channels. Those approaching closer should do so at idle speed.
The regular spiny lobster season opens Aug. 6.
For details, go to www.myfwc.com. (Click on saltwater fishing, recreational regulations and lobster.)
Coming events
July 8: Basic boating safety class offered by Coast Guard Auxiliary, 9 a.m. to 5 p.m. in the headquarters building at Spanish River Park, 3939 N. Ocean Blvd., Boca Raton. Fee $35 for adults or $20 ages 12 to 19. Register at the door. Bring lunch. Call 391-3600 or email fso-pe@cgauxboca.org.
July 8: Big Dog, Fat Cat KDW fishing tournament based at Sailfish Marina in Palm Beach Shores. Captain’s meeting 7 p.m. July 7 at Sailfish Marina. Entry fee $200 per boat through July 2 or $250 thereafter. Call 315-3722 or visit www.bigdogfatcat.org.
July 15: Full moon wahoo tournament, the second of three summer wahoo events organized by the West Palm Beach Fishing Club. Entry fee $60 per team. At least one team member must be a West Palm Beach Fishing Club member. Call 832-6780 or go to www.WestPalmBeachFishingClub.org.
July 22: Boating safety class offered by Coast Guard Auxiliary, 8 a.m. to 4 p.m. in the classroom building next to the boat ramps, Harvey E. Oyer Jr. Park, 2010 N. Federal Highway, Boynton Beach. Fee $20. Discounts for ages 14 to 18 and for family groups. Register at the door. Call 704-7440.

Tip of the month
Boats carry hazardous products that should not be disposed of in residential garbage cans.
Outdated emergency flares, spent fire extinguishers and old batteries, for example, should be taken to one of the Palm Beach County Solid Waste Authority’s Home Chemical and Recycling Centers.
Unwanted fuel, oil and boat cleaning products also should be taken to an SWA facility. Disposal is free for Palm Beach County residents.
The SWA’s home chemical drop-off locations include:
• The Central County Transfer Station, at 1810 Lantana Road. It’s open from 7 a.m. to 5 p.m. weekdays and from 7 a.m. until noon on Saturdays.
• The East South County Transfer Station, at 1901 SW Fourth Ave. in Delray Beach. It’s open from 7 a.m. to 5 p.m. weekdays and from 7 a.m. to 3 p.m. on Saturdays.
For details, call 697-2700 or visit www.swa.org.