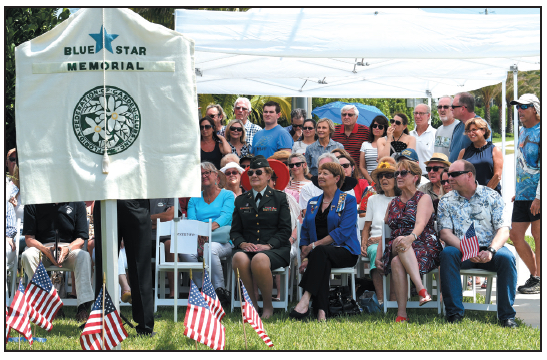 A crowd gathers on Memorial Day for the unveiling of a Blue Star Memorial at Ocean Ridge Town Hall. Photos by Jerry Lower/The Coastal Star

This past Memorial Day, members of the Ocean Ridge Garden Club, residents and guests met outside Town Hall to unveil a memorial that will honor our country’s service members every day for years to come.
Promptly at 11 a.m., an honor guard from American Legion Post 164 in Boynton Beach presented the colors, allegiance was pledged and Garden Club president Mary Ann Cody welcomed about 70 people to the ceremony.
“Good morning,” she began. “Our gathering today is just one small spark in the flame of pride that burns across the nation today.”
That one small spark was a Blue Star Memorial Marker waiting to be unveiled, a 7½-foot, cast aluminum tribute to the men and women who serve, have served and will serve in all branches of the armed forces.
In 2017, the club’s 65 members voted to allocate $1,540 to purchase the marker, and civic committee co-chairs Lynn Allison and Barbara Cook worked with the Florida Federation of Garden Clubs and town officials to facilitate its placement.
In accepting the gift on behalf of Ocean Ridge, acting Town Manager Tracey Stevens became briefly emotional as she noted that the towering flag above the hall was at half-staff.
“Memorial Day is one day,” she reminded the crowd, “but this memorial marker will be a reminder every day of the sacrifices by our nation’s finest and bravest.”
Barbara Hadsell, president of the Florida Federation of Garden Clubs, noted that Ocean Ridge now boasts one of 3,204 Blue Star memorials in the 50 United States.
Florida has 184 memorial markers, including two in Boynton Beach, one on U.S. 1 at the north entrance to the city and another on 32nd Lane, off Boynton Beach Boulevard between Seacrest Boulevard and Interstate 95.
The Boca Raton Garden Club has placed a marker in Sanborn Square Park, and a second in front of its clubhouse on Northwest Third Avenue.
Lake Worth has a marker on U.S. 1 at 19th Avenue North, and the West Palm Beach Garden Club has sponsored another in Prospect Park. 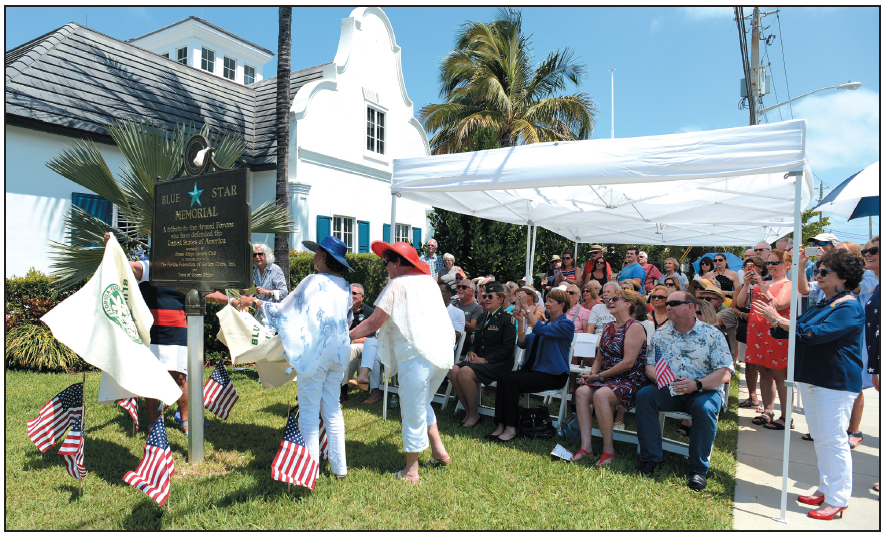 ABOVE: The unveiling of a Blue Star Memorial Marker in Ocean Ridge on Memorial Day was two years in the making. The Garden Club voted to allocate $1,540 to purchase the marker and worked with its state federation to place it. BELOW: Lynn Allison and Barbara Cook (l-r) co-chaired the memorial committee. Lt. Gen. Thomas Bostick and Vietnam veteran Al Naar spoke at the ceremony. Naar reminded the crowd that ‘war is a dirty business,’ and Bostick said troops who died ‘made the ultimate sacrifice.’

A start with WWII
The Blue Star Memorial Highway tradition began with a world war, a garden club and 8,000 white dogwood trees.
In 1944, the New Jersey State Council of Garden Clubs planted those 8,000 trees along a 5½-mile stretch of U.S. 22 between the towns of Mountainside and North Plainfield, to honor the men and women of the state then serving in the armed forces.
The blue star came from the star on military service flags that families displayed in their windows to show they had a son or daughter serving.
In 1945, the program went national. Individual garden clubs collaborated with state highway departments, and a uniform marker was designed by Cornelia Kellogg, founder of the clubs’ national council.
With the war over, the program came to honor all who were serving, had served or would serve. Blue Star Memorial Markers and a smaller “byway marker” were added for display at cemeteries, veterans organizations and public buildings.
In his remarks, Al Naar, an Ocean Ridge resident who served as an operating room Navy medic in Vietnam in 1968-69, refused to let patriotic sentiment disguise the horrors of war.
“War is a dirty business,” he said. “We struggled to save the wounded, sometimes after days without sleep, and sometimes during incoming fire.”
In March 1969 alone, his 3rd Medical Battalion handled 1,464 cases, took 7,752 X-rays and performed 130 blood transfusions.
Naar closed by quoting Gen. Douglas MacArthur’s farewell address.
“The soldier above all other people prays for peace,” MacArthur told the U.S. Congress, “for he must suffer and bear the deepest wounds and scars of war.”
The day’s keynote speaker was Lt. Gen. Thomas Bostick, who retired in 2016 as the commanding general of the U.S. Army Corps of Engineers.
“Memorial Day is a recognition of those who made the ultimate sacrifice,” he said, “but none of them willingly died. They willingly served their country and their teammates, and they died as part of that.”
And then the general quoted Nelson Henderson, a Canadian farmer who said, “The true meaning of life is to plant trees under whose shade you do not expect to sit.”
Recalling a time in his military career when he was a recruiting officer, Bostick said, “You reach out to young people and plant trees, and that’s what this garden club does in many ways.”
And so the time had come.
Mary Ann Cody, along with Barbara Hadsell and Carol Coleman of the state federation, lifted the cover from the tribute, the honor guard fired a volley, and Legion Post 164 bugler Christine Morales sounded a slow and mournful taps.
The first Blue Star Memorial marked where New Jersey garden clubs had beautified a highway 75 years ago. The marker was not an end in itself, and the new one at Ocean Ridge Town Hall is no exception.
Next, Lynn Allison said, the club plans to create a small garden around the marker’s base.
“Something we can maintain.”