By Steve Pike
Shagball and Tangles are back.
Lantana author A.C. Brooks’ second book, Dead on the Dock, follows the former TV fishing show host and his pint-sized friend (and former Elvis impersonator) through a labyrinth of adventures that includes one sinking boat, a contract killer, the FBI, two dead mobsters and “three freaked-out guys wondering what the hell we got into.”
What they, and readers, are into is the second of a series of books Brooks has for the duo and their friends — some of whom are pure fiction and others based on people from the coastal corridor between Lantana and Delray Beach.
“It’s not hard to figure out who’s who,” said Brooks as he sat at a booth inside The Old Key Lime House restaurant in Lantana.
As in Brooks’ first book, Foul Hooked, The Old Key Lime House is the hub for the characters in Dead on the Dock. But unlike the first book, the restaurant is referred to by its real name. In his first book Brooks called it “The Ole House.”
Other restaurants, along the Intracoastal Waterway  and in West Palm Beach, remain fictionalized in Dead on the Dock, although it’s not difficult for anyone who has spent even a few weeks along the coastal corridor to figure out the logistics.
The Old Key Lime House also is central to Brooks’ marketing. Restaurant owner Wayne Cordero is a big Shagball and Tangles fan, and each book can be found in the Old Key Lime House’s gift shop.
“We’ve sold a lot of books here,” Brooks said.  “The second book (published in December) has been doing great. It’s also helped sell more of the first book. Everybody who read the first book has read the second book.
“It’s funny. Older women — in their 60s and 70s — seem to love these characters.”
As with Foul Hooked, Brooks self-published Dead on the Dock, through CreateSpace, an Amazon.com company that helps writers without traditional publishers.
Brooks is using author John Locke as a model for self-publishing. Locke, creator of the “Donovan Creed” series of thrillers, is a sort of godfather of self-publishing. He was the first self-published author to sell one million Kindle ebooks.
“His strategy on selling books is get to get at least three books under your belt before you start trying to promote your work,” Brooks said. “People want to buy books from authors with multiple titles. They like to follow characters and stories.”
To that end, Brooks already is at work on his third Shagball and Tangles book, Weed Line, much of which will take place in the Caribbean.
In that book, Brooks says, Shagball and Tangles will lose their boat, the “Lucky Dog.”  So to help promote the fourth book, Brooks is planning to have a contest for readers to name the characters’ new boat. He’s working with a boat manufacturer to supply Shagball and Tangles’ next boat. Sort of a literary version of product placement.
Brooks has recently started doing more book promotions on his Facebook page and Twitter account and recently started blogging. He also plans to soon post some chapters of Dead on the Dock on his website, acbrooks.net.
“Self-promotion is not really my strong suit,” said Brooks, who will have a book-signing May 5 at the Old Key Lime House. “Fortunately, I have some friends who like to promote me.”
He’s also fortunate to have characters like Shagball and Tangles. 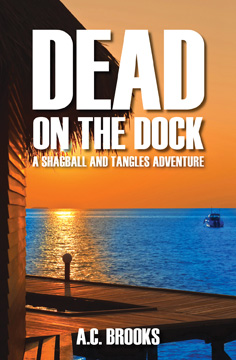