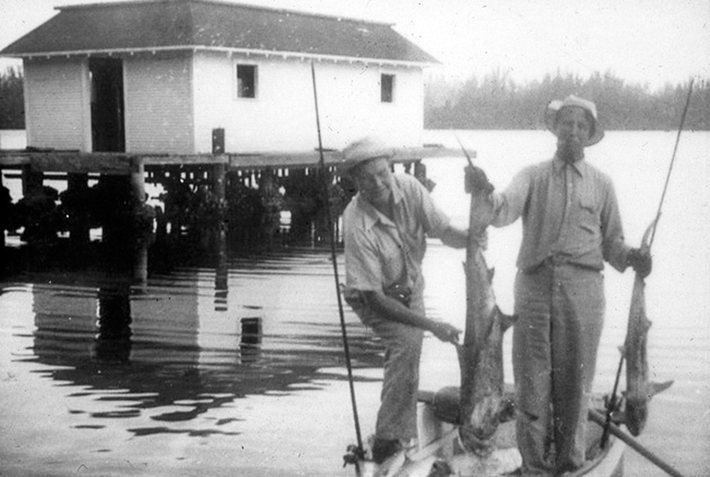 Anglers at the Keese boathouse, in Lantana’s south cove, display sharks they caught around 1940. Photo provided by Local History Archives

On July 20, 1921, the town of Lantana was officially born.
The community covered 1 square mile at the time and was home to 100 residents, 22 of whom voted to incorporate.
Today, the town has burgeoned to 2 square miles, and this Fourth of July, many of its 11,695 residents will gather in Bicentennial Park to celebrate the first 100 years.
Allegiance to the flag will be pledged, the national anthem sung. There will be stilt walkers and fishing lessons, a professional band and a patriotic baby contest, ending with the longest, loudest, brightest fireworks display the town has ever seen.
Happy 100th birthday, Lantana.
That’s the official history, anyway.
But as with so many official histories, the truth is an older, murkier, even better story.

“We had a good 50 years prior to 1921 in which pioneers worked to build it,” Michelle Donahue says of the town.
Donahue is a passionate apostle for the history of Hypoluxo Island, the eastern portion of Lantana. She and her husband, Sean, live in Casa Lillias, the island’s oldest house, built in 1927. She writes the Brown Wrapper, a local history newsletter. She hosts the island’s free Happy Hour History Tours every month.
On May 7, as about 20 residents on folding chairs in McKinley Park listened, Donahue introduced them to the first settler of European descent in what is now Palm Beach County — and Lantana.
“Our beginning was really in 1873,” she began.
On Oct. 20, 1872, Hannibal Dillingham Pierce was 37, a Maine transplant working as an assistant lighthouse keeper when the steamship Victor shipwrecked just south of Jupiter Inlet.
The crew and passengers were rescued, and the next year Pierce converted one of the Victor’s abandoned lifeboats into a small sailboat and headed down Lake Worth with his family, to settle on a small island at the south end.
He built a cottage with a thatched roof, raised tomatoes and eggplants for shipping to Jacksonville, and homesteaded on the island.
When Seminole Indians told him hypoluxo meant “water all around, no get out,” he knew what to name his homestead.
You might call Hannibal Pierce Lantana’s founding father.
But then came E.R. Bradley.
No, not that E.R. Bradley.

“I live on ‘old man’ Bradley’s property,” Janet DeVries Naughton will tell you with pride.
A professor of U.S. history and faculty librarian at Palm Beach State College, Naughton is the author of numerous books on the county’s history. She lives in The Moorings, a condo community that sits on land homesteaded by E.R. Bradley.
You’re probably thinking of Edward Riley Bradley (1859-1946), who ran the legendary Palm Beach gambling casino and lives on in spirits at E.R. Bradley’s Saloon, the popular West Palm Beach bar.
Edwin Ruthven Bradley (1842-1915) arrived in 1877 to become, with his wife and children, the first documented white settler on the west side of the lake in what is now Lantana.
Mail delivery was patchy then, and the Jupiter Lighthouse the end of the line, but in 1885 rural mail routes were established and Lantana’s E.R. Bradley was the first to walk the stretch from Lantana to Lemon City, known today as Miami. He was paid $600 a year.
Alas, the original “barefoot mailman” probably never heard the title, coined by Theodore Pratt for his 1943 novel. The original 126 acres might have become known as Lyman, had owner Morris Benson Lyman not named the fledgling area Lantana.

“I would love to have been there in that time and have met him,” Cindy Jamison says. “I’m proud that my family had a part in settling the area.”
She is Cindy Lyman Jamison of Boynton Beach, daughter of Kenny Lyman, granddaughter of Walter Lyman, and great-granddaughter of M.B. Lyman.
Lantana is called Lantana because Morris Benson Lyman (1860-1924), a carpenter from Canada, homesteaded 126 acres where the west end of the Lantana bridge stands today.
Lyman Point, it was called, until M.B. renamed it Lantana Point, after the bright yellow, red and orange flowers native to South Florida.
In 1889, he built a house on the property, still standing and very much alive as the Old Key Lime House seafood restaurant.
You’d be forgiven for thinking it’s the oldest house in mainland Lantana, but that honor belongs to the home his father, Morris Kennedy Lyman, built two years earlier. It’s still standing, much altered, at 122 S. Lake Drive.

“Later, M.B. Lyman opened general stores in Lantana, Boynton Beach and Lemon City,” Naughton says. “You could say he had the first chain store in Florida.”
When the town celebrates its centennial in Bicentennial Park, today’s residents will be partying on M.B. Lyman’s former homestead.

By the time the man who named Lantana died in 1924, the town was already incorporated, and Florida was booming.
“People came initially because this was America’s last frontier,” Janet Naughton says. “It was unexplored, and then when the real estate boom came, people just poured into South Florida.”
In 1925, the first bridge linking the town to the barrier island was built. Beachgoers no longer had to take a boat and then trudge through mangrove swamp for a day at the beach.
In 1931, 40 acres on the south end of Hypoluxo Island seceded from the town to become part of Manalapan.
During that decade, Finnish immigrants arrived in Palm Beach County.
The 2000 census tallied 4,879 in Palm Beach County, but that was a 10% drop from the 1990 count.
“Today, I’d estimate we have about 1,000 Finns in Lantana alone,” says Peter Makila, the honorary consul of Finland. “The older ones are dying, and the younger ones may not be coming because it’s difficult to get a visa. A lot of the young professionals are going to Silicon Valley.”
In 1948, construction began on Finlandia House, the local Finns’ still very active community center.
On July 16, 1950, the Southeast Florida State Sanatorium opened on Lantana Road, the second of four state tuberculosis hospitals. After the state tuberculosis board was dissolved in 1969, it was renamed the A.G. Holley State Hospital after the retiring chairman.
The hospital was closed in 2012, and the building demolished in 2014, to make way for more condos and a shopping center.

“I was in charge of Christmas,” Malcolm Balfour boasts, “until I had the usual firing.”
From 1972 until his death in 1988, Generoso Paul Pope Jr., publisher of The National Enquirer, added a touch of holiday magic to the tabloid’s customary scandal and sleaze by erecting “the world’s tallest Christmas tree” beside Lantana’s railroad tracks.
Thousands came from miles around to ogle the 7,000 twinkling lights, 400 ornaments, and 50 3-foot candy canes adorning the towering balsam fir. From 1972 until he was fired in 1980, Hypoluxo Island resident Balfour, 83, was the Enquirer’s articles editor, a job that also entailed making sure the world’s tallest Christmas tree was indeed the world’s tallest Christmas tree.
“Well, Pope came down one day during the first year, and he had a picture in The New York Times that said the tree at Rockefeller Center was 76 feet tall. Ours was 74,” Balfour recalls.
“So I pointed out that the Rockefeller tree was on a 6-foot pedestal.
“He seemed satisfied.”

In the past 100 years, Lantana has seen 26 mayors come and go, including three women, but none lasted as long as Dave Stewart.
First elected in 2000, he served the town for 21 years, until his defeat in the March 2021 election.
“But I was president of the Hypoluxo Island Neighborhood Association in the late ’80s and chairman of the planning and zoning board for six or seven years,” he says, “so I can say I’ve been active in this town for a third of its history.”
Stewart arrived in 1977, settled on the north end of the island, and never left.
But he tried: In 1989, when their son was born, the Stewarts realized they were living in a neighborhood with lots of elderly residents but no small children.
“We looked from Boca Raton to Sewall’s Point and found nothing with the same amenities and hometown feeling. That’s why we stayed,” Stewart says.
“It’s more busy now, it’s more congested, but it’s also gotten better. The first 100 years are over, and now we’ve got the next 100 to look forward to.”

In 1892, Morris Benson Lyman, who had given Lantana its name, also gave it a cemetery — 2 acres at the southeast corner of Arnold Avenue and Lantana Road.
A year later, his 9-month-old daughter, Rachael, was among the first to be buried in Evergreen Cemetery.
In 1909, his father, Morris Kennedy Lyman, arrived, and in 1924, he joined them there.
In all, 18 marked grave sites remember the town’s eight pioneer families.
But not Edwin Ruthven Bradley or Hannibal Dillingham Pierce.
Bradley moved south after his time in Lantana and was buried in Miami’s Woodlawn Cemetery in 1915.
Pierce, the first white settler on Hypoluxo Island, died in 1898 and was buried in Lakeside Cemetery on the waterfront in West Palm Beach.
After Henry M. Flagler donated land to the west that became Woodlawn Cemetery, most of the early, lakeside graves were moved there.
But not all.
Along with about 40 other reluctant pioneers, Hannibal Pierce still rests today somewhere beneath the Norton Museum of Art.