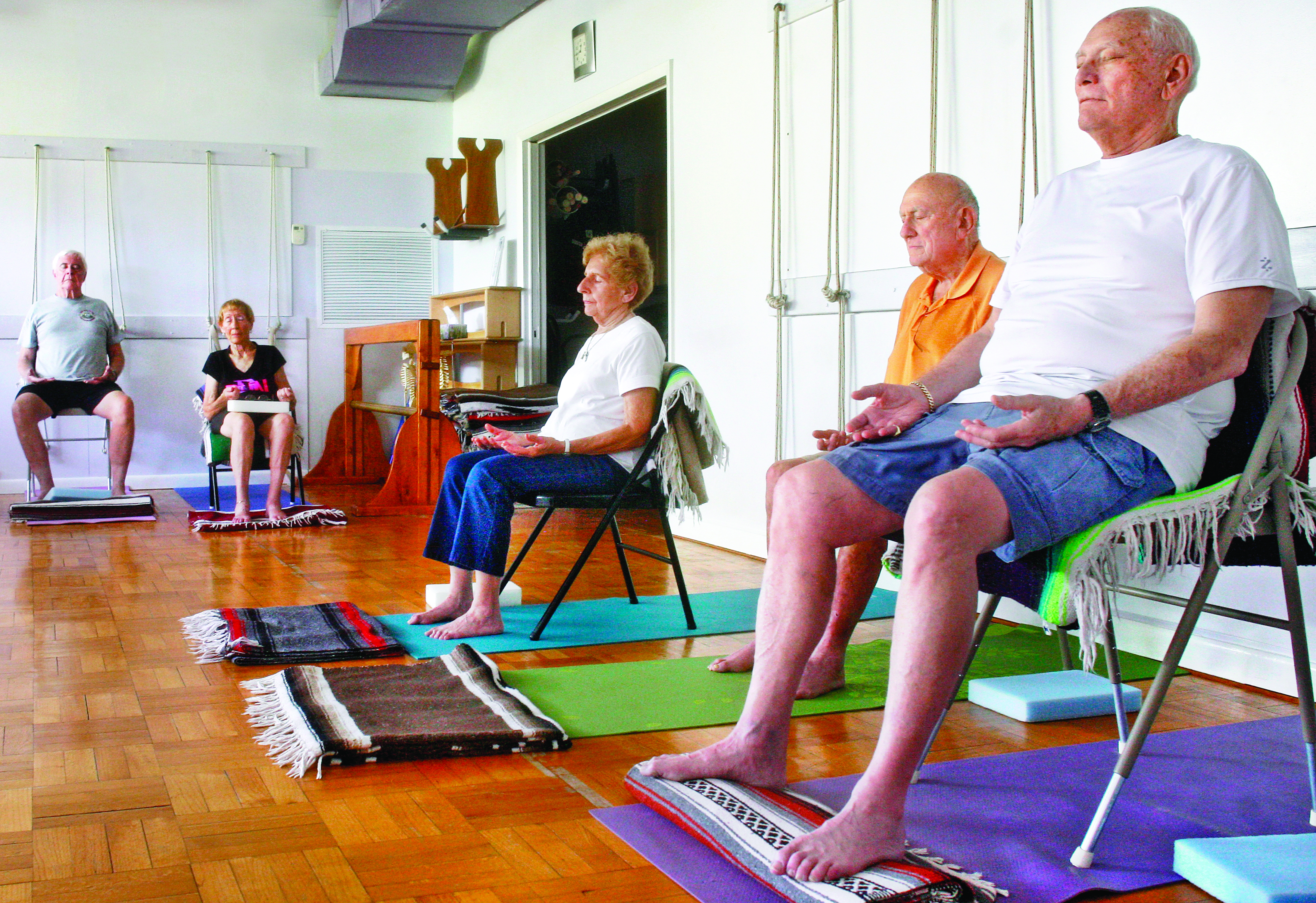 Murray Rubin (front) and others take a chair yoga class taught by Stephanie Streff at Yoga Sol in Delray Beach.

Rubin says he noticed a difference in his back pain after only one class. 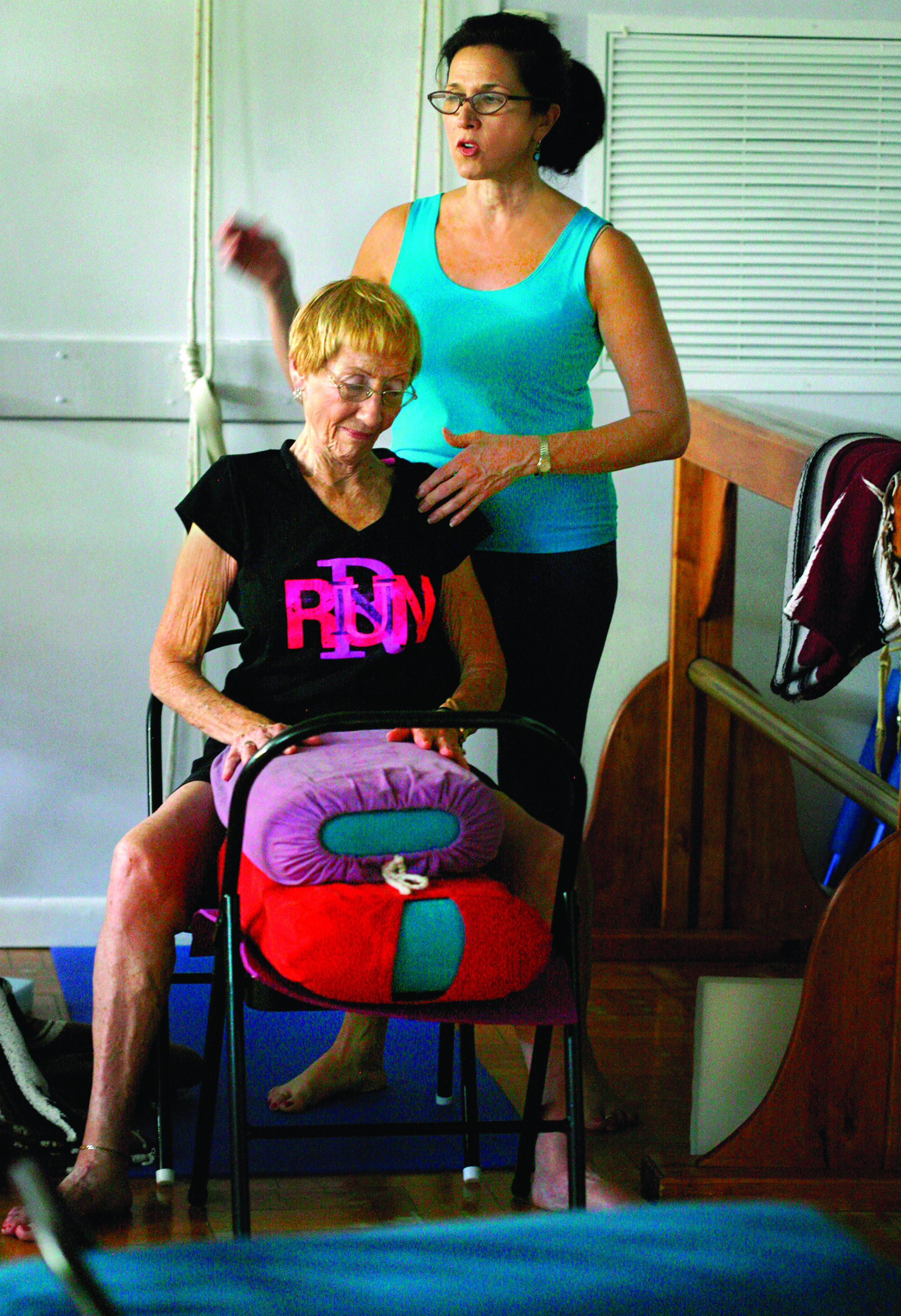 Streff works with Rachel Neuswanger, who says yoga ‘has kept me out of a wheelchair.’

Back when he was a pharmacist, standing on his feet all day, Murray Rubin had such back pain that he sometimes had to lie on the floor to get any relief. More recently, the old pain flared up and his orthopedist advised him to go to a neurologist.
“I had a tremendous amount of back pain. It was bone against bone,” said Rubin, 81, of Delray Beach. “I could barely get out of bed. The next thing for me was surgery.” He didn’t need to keep that appointment. His granddaughter urged him to try yoga. He’s smiling and his doctor is scratching his head, mystified but pleased. “He said he never would have sent me to a yoga class, but to keep on doing whatever I’m doing,” said Rubin.
What he is doing is two yoga classes, both aimed at relieving pain, loosening joints and addressing other ailments brought on by time and injuries. Yoga Sol, in Delray Beach, offers a range of classes for students of all types, from athletic to elderly. The two classes Rubin takes are called “Ageless” and “Gentle Chair.”
“I felt relief from the first class,” said Rubin. 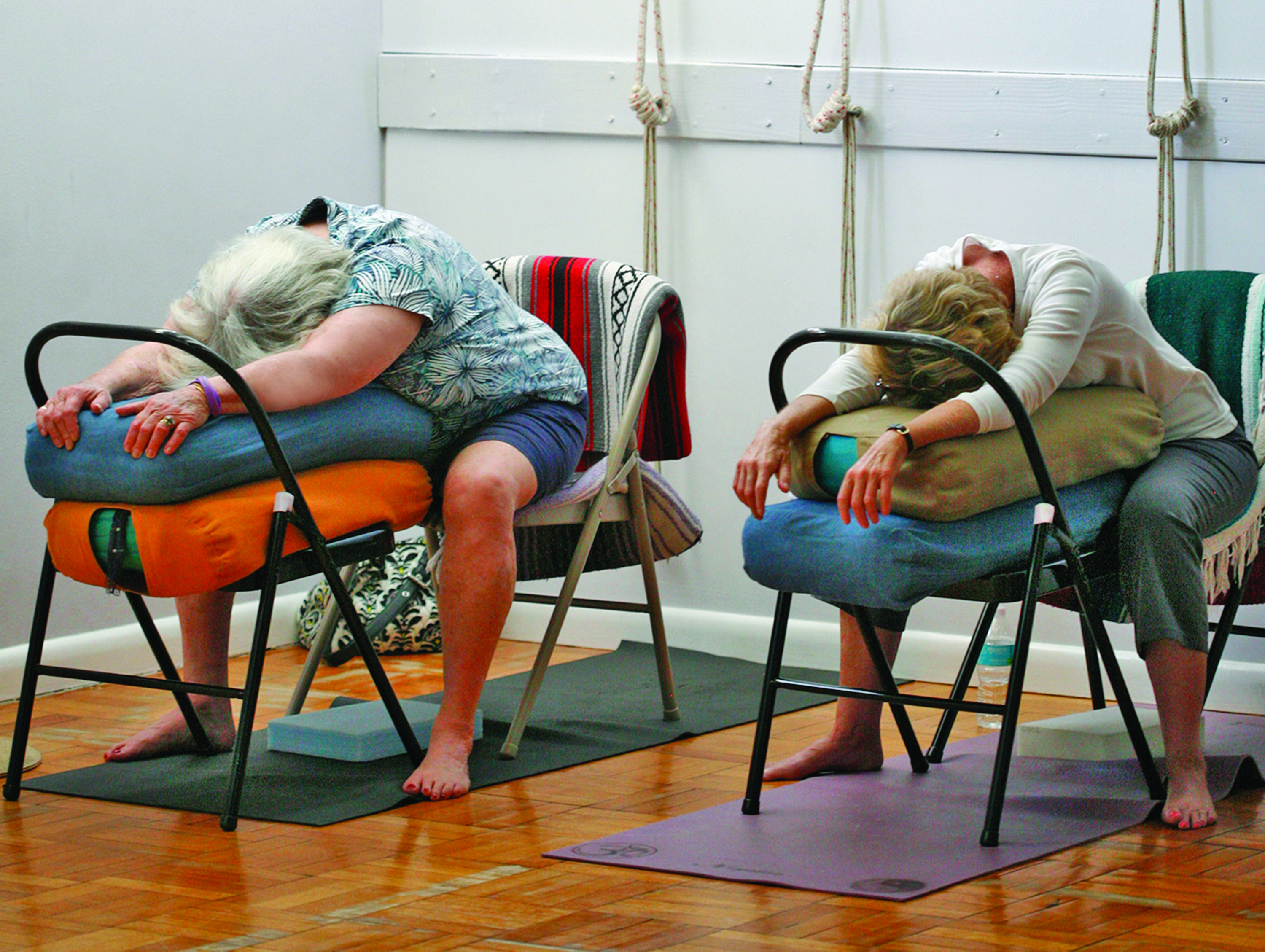 Yoga students use pillows and other props to master poses and improve posture. 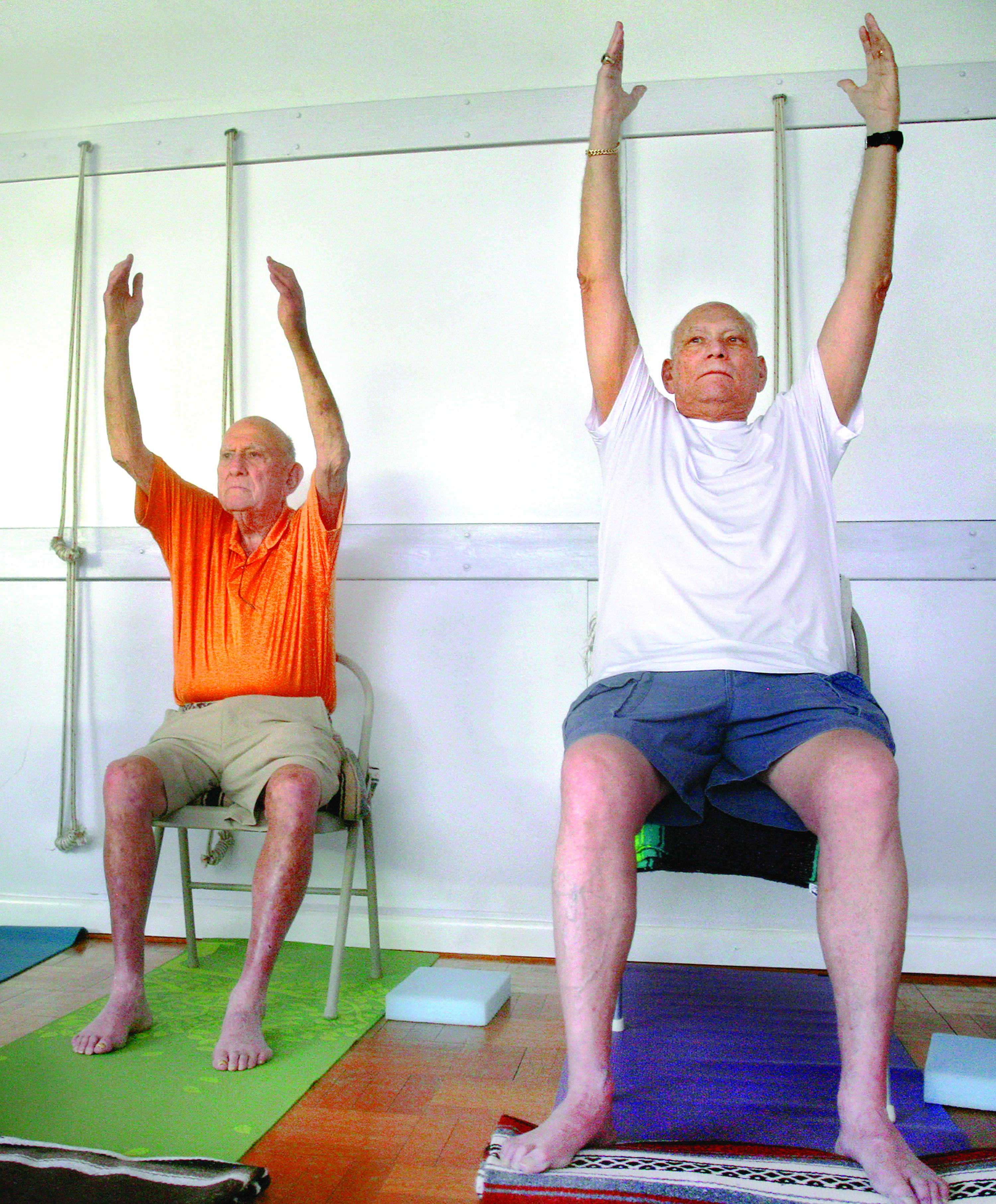 The classes are led by Stephanie Streff, who has been trained in the Iyengar method of yoga, which is known for at least two features that might assist someone with physical limitations: a painstaking attention to correcting posture problems, and the use of wooden blocks, straps, blankets and, yes, chairs, to allow almost anybody to manage the basic yoga poses.
B.K.S. Iyengar, who began yoga as a sickly child in India, practiced and taught into old age. He died in 2014 at the age of 95.
True to her Iyengar training, Streff circles the room, adjusting the position of each student’s arms or feet until she is satisfied that they are in alignment.
She asks students if they are feeling pain or discomfort. Nothing seems to escape her scrutiny. She adds a blanket under Rubin’s feet.
“She gives excellent instruction, and she individualizes the program,” said Rubin. “But she also makes it fun.” “Best ever,” Streff tells Rubin, giving him a high-five after he completes a pose.
He beams.
Also in the chair class are Abe Sokol, 93, of Delray Beach, who says that yoga has helped his golf game, and his neighbor Elaine Grosoff, who fits yoga in with her tai chi classes, volunteering and mahjong games.
Rachel Neuswanger of Boynton Beach, who uses a cane to walk, practices yoga in class to help with a curvature of the spine, arthritis and a childhood injury. She also practices at home every day.
“It has kept me out of a wheelchair,” said Neuswanger, who brought a snowbird friend to class. There are hundreds of yoga poses, many of which can be adapted to aging or injured bodies. “We don’t work slower, we work smaller,” said Streff.
“We break up the poses into bits and pieces. And I try to add something new every time. It’s about feeling successful."