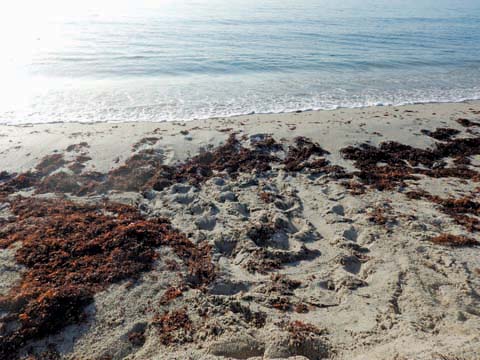 ‘False crawls,’ where the female turtle comes a few feet ashore and then turns around without nesting, have become more common this year. Jerry Lower/The Coastal Star

Sea turtle nesting on Palm Beach County beaches is unofficially good so far this season, but one number is troubling turtle experts: an abnormally high number of “false crawls” or times when egg-bearing female turtles pull themselves onto the beach with the intent of digging a nest, then turn around and decide against it.
Relatively dry weather this summer could have something to do with the high number of false crawls. If the beach sand is not moist enough for a good egg chamber, a mother turtle will turn around, head back into the ocean and wait for better nesting conditions.
But Kirt Rusenko, marine conservationist at Gumbo Limbo Nature Center and director of Boca Raton’s sea turtle program, believes human activity has something to do with the high number of false crawls this year.
“We’ve never seen false crawls like this in the last 20 years,” Rusenko said. “It’s kind of a mystery to us.”
Telltale signs of human activity on the beaches that Rusenko has observed include ashes from beach fires.
“There’s a lot of people activity this year out on the beach,” he said.
As of July 7, sea turtles had dug 767 nests in the five-mile stretch of beach from the Palm Beach/Broward county line to Highland Beach. But there were nearly 600 more false crawls than nests — 1,359 — on that same stretch of beach.
Typically, sea turtles make one false crawl for each nest they dig.
The Florida Fish & Wildlife Conservation Commission called a press conference before the Fourth of July weekend in hopes of reducing human interference with nesting sea turtles, which are protected by state and federal laws.
“If you see one, leave her alone and let her do her thing,” said David Fowler, an investigator with the FWC’s South Region office in West Palm Beach.
As a law-enforcement officer, Fowler has found parents trying to take photos of their children on the backs of sea turtles — an illegal activity that could result in arrests and fines.
Fowler also warned the public against trying to “help” sea turtles by picking up hatchlings and carrying them to the water.
“The turtles have been doing this for millions of years,” he said. “They know what they’re doing.”
FWC sea turtle biologist Meghan Koperski said beachgoers should cover up holes dug for sand castles before they leave the beach, noting that she has received reports of female sea turtles falling into holes and dying on beaches this year.
Disturbing turtles with lights is a more common problem as curious observers try to catch a glimpse of mother sea turtles laying their eggs, Koperski said.
“It’s great that people are so excited about turtles,” she said. “We just want to make sure we don’t cause them problems by loving them so much.”

Avoid disturbing nesting sea turtles
1. If you walk the beach at night during the nesting season (March 1 through Oct. 31), don’t shine flashlights, take flash photographs or build fires. Even the light from a cellphone can cause a mother turtle to turn around and decide against nesting.
2. Keep your distance from sea turtles, and be quiet.
3. Don’t approach or touch sea turtles, their eggs or their hatchlings. All five sea turtle species are protected under the federal Endangered Species Act and Florida’s Marine Turtle Protection Act.
4. If you see someone touching or harassing a sea turtle or disturbing a nest, report it by calling the state’s Wildlife Alert Hotline: (888) 404-3922 (*FWC or #FWC on a cellphone).