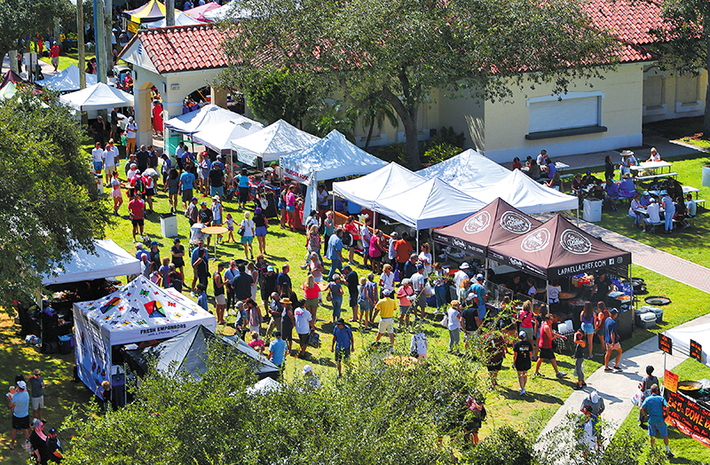 ABOVE: The Delray Beach Green Market opened for the season on a beautiful day in October. Tim Stepien/The Coastal Star BELOW RIGHT: An abundance of locally grown produce is the backbone of South County greenmarkets. Photo provided by Lori Johnson The weather still says summer at times, but the return of greenmarkets is a sign the temperature will stay cooler soon.
The Delray Beach Green Market returned Oct. 22, with new vendors, a chef’s showcase, and an expansion of the federal SNAP program accepted for payment.
Manager Lori Johnson is excited each year the market opens for the fall-winter season.
“We have 50-plus vendors. This is our 27th year — I’ve been managing the market 23 of those years,” Johnson said. “I have an advantage, of being both a vendor and a manager.”
She sold olive oils for 12 years and says she can see both sides of working the market.
This season, she’s introducing a local vendor with a unique product: the Palm Beach Salt Company. A variety of salts are made from seawater collected in Palm Beach and dehydrated to produce a table salt. “It’s really unusual,” she said. “We haven’t had anything like this before.”
The regulars are back, as well, including Red Splendor Farms, owned by chef Dan Ramos.
“He brings some unique produce,” Johnson said. “He doesn’t just grow red and green peppers, he has a variety of unusual ones. He has herbs, edible flowers and in mango season, an incredible variety of mangoes I’ve never heard of.”
This year, he’ll bring seasonal jams as well as fresh eggs.
Gratitude Garden Farm, an organic farm in Loxahatchee, returns with its wide display of mushrooms, Everglades tomatoes, fruits, greens, sprouts and tinctures.
​“They’re really good about educating the shopper,” Johnson said. “That’s what’s great about farmers markets. You talk to the person who grew the vegetables, baked the bread or made the food you’re buying. You can have a conversation with them and ask questions. You can’t do that at a grocery store.”
Also returning is Captain Clay and Sons, a seafood purveyor. It has its own fishing boats and buys fish and stone crabs, now in season, from other local fishermen.
The market will have additional cheeses sourced from the United States this year, Johnson said.
“Vito from Mozzarita is a regular favorite,” she said of Vito Volpe and his company. Volpe is an Italian cheesemaker who brings fresh cheeses — mozzarella, ricotta and the creamy burrata — to the market. Chefs frequent his booth and use his products in their restaurants.
Starz Bakery, a New York Jewish-style bakery, brings pastries, bagels and bialys.
Expect a line as shoppers head for this booth early in the morning, Johnson said. “They get coffee and go wait in line.”
Also new at this market is the Cider Donuts booth, which sells mini cinnamon-sugar doughnuts cooked fresh on site, served hot with an apple dipping sauce.
Johnson is also proud of the market’s chef showcase. Biweekly, an area chef will shop the market, then prepare a dish or meal in the display kitchen booth and serve samples to the audience. The recipe will be shared on the market’s website.
“It’s really exciting to see shoppers, the next weekend, who have printed out the recipe and are going around the market buying the ingredients for it,” Johnson said.
This season, shoppers using the Supplemental Nutrition Assistance Program for fresh produce purchases will get a bonus with the addition of a Fresh Access Bucks card, which adds $40 to their benefits to spend without restrictions.
“We already started the SNAP program back in January,” Johnson said. “We’re the only market in Palm Beach County that accepts it.”
Delray Beach Green Market is in the field at Old School Square, 51 N. Swinton Ave. Hours are 9 a.m. to 2 p.m. Saturdays through mid-May. It will close for two weeks and reopen for summer. Go to https://delraycra.org/green-market.

Other markets
The Lake Worth Beach Waterside Farmers Market has begun its 16th year.
Manager Emily Theodos-sakos said shoppers will see 60 or more vendors with home-grown or homemade foods, plants and other products.
Solace Farms is one of the market’s oldest vendors, with a variety of organic produce, eggs and this year, meats.
Holland’s Produce, based in Jupiter, brings all types of organics, Theodossakos said, including purple and orange cauliflower. “They’re said to be high in antioxidants,” she said.
Le Petit Pain bakery offers French-style pastries and breads. Honey comes from Loxahatchee beekeepers, and other vendors have homemade Bundt cakes and empanadas. Several more offer prepared foods.
Theodossakos said that “the best baba ganoush in the county” is available from a European bakery at the market.
International gourmet items sourced just for the market are here, including olive oil “straight from Greece,” she said.
A few vendors specialize in table items. “We have two potters making ceramics,” she said, and hand-blown glass for serving, as well.
The market runs through April, 9 a.m. to 1 p.m. Saturdays at Old Bridge Park, Lake Road at State Road A1A. Parking is free till 1 p.m.
In Lantana, an outdoor market will be held Sundays, starting Nov. 20 through the end of May, at the Recreation Center, 418 S. Dixie Highway.
The market will run from 11 a.m. to 3 p.m.
It will have limited produce, but 20 vendors will include those with jewelry, soaps and this year, a bonsai grower. A food truck will be on site, and prepared foods such as jams and jellies and popcorn will be sold. Arrangements are being made with a farm to have a weekly box produce program, market manager Hector Herrera said.
The Artisan Market and Greenmarket at Mizner Park in Boca Raton begins its season in mid-January, after the Christmas and holiday displays are taken down, said Joanne Polin, market manager.
The Boca Raton Greenmarket will skip the season after failing to find a suitable site, said market director Emily Lilly, and its future is unclear. It had a longtime home at Royal Palm Place and briefly set up in a parking lot at City Hall.

Pie It Forward
The fall fundraiser for Meals on Wheels of the Palm Beaches is underway. Order a pumpkin, pecan or apple pie ($30) or a Key lime pie ($35) through Nov. 17 at mowpbpie.org, and pick it up Nov. 22, two days before Thanksgiving.
Money from the pies, which are donated by chefs at resorts, restaurants and country clubs, goes to feed housebound seniors throughout the county. Hot meals are delivered by volunteers five days a week.
This year, Pie It Forward lets donors add an extra $5 to buy a slice for a senior. The money goes to a dessert fund to provide special treats for birthdays and holidays. You can also send pies as gifts with each recipient getting a voucher allowing him to choose a flavor and a pickup location.
​The Baker’s Bundle gives buyers three of the ready-to-serve pies of their choice plus a reusable tote for $100.
Pie pickup locations include Duffy’s Sports Grill on Federal Highway in Delray Beach, Palm Beach County Convention Center on Okeechobee Boulevard in West Palm Beach, and Roger Dean Stadium in Jupiter.

In brief
Bond Street Ale and Coffee in Boynton Beach’s Riverwalk Plaza has opened a second location up the road at the Casa Costa condos. It’s a trio of themed eateries with two now open: Bond Street Market Italian, at 308 N. Federal Highway, and Bond Street Cantina, at 324 N. Federal, for Mexican fare. They are open for lunch and dinner.