The restaurant in Boynton Beach’s historic house is the first of two that Andrea Jourdan, from Quebec, is opening in Palm Beach County.

Jourdan, a food celebrity who has owned specialty groceries, created gourmet products, written cookbooks, and opened restaurants in Los Angeles and Montreal, is bringing two styles of French cuisine to her restaurants.

“The Provençal menu here seems to match Florida well. The bright flavors, tomatoes, the seafood,” she said, setting out the amuse bouche of a cucumber and strawberry “gazpacho” shot.

Her opening menu was prix fixe, but offered a taste of dishes on the menu served at two seatings.

“It’s a little difficult in this tiny kitchen,” she said. “With everyone seated at once, it’s like catering. I could not do it without his help.” She put her arm around her chef de cuisine, Russell Arnold, who most recently cooked in Fort Lauderdale.

The modernized house was previously a restaurant called The Little House. Because of historic restrictions at the time, kitchen upgrades were limited and a professional outfitting was not possible.

The 1920s building on Ocean Avenue, the former Ruth Jones Cottage, was converted to the small restaurant/tavern in 2012 with the Community Redevelopment Agency’s backing. The restaurant closed two years later and was vacant until Jourdan moved in.

A complete renovation and addition of a professional kitchen made it marketable in 2017; Jourdan found it in 2019, calling it “a homey nest” that works with the modern French country cuisine she offers.

Diners seeking French onion soup typical in French restaurants may be unfamiliar with her version, a rich bouillon-based pearl onion soup with the cheese in the croutons. 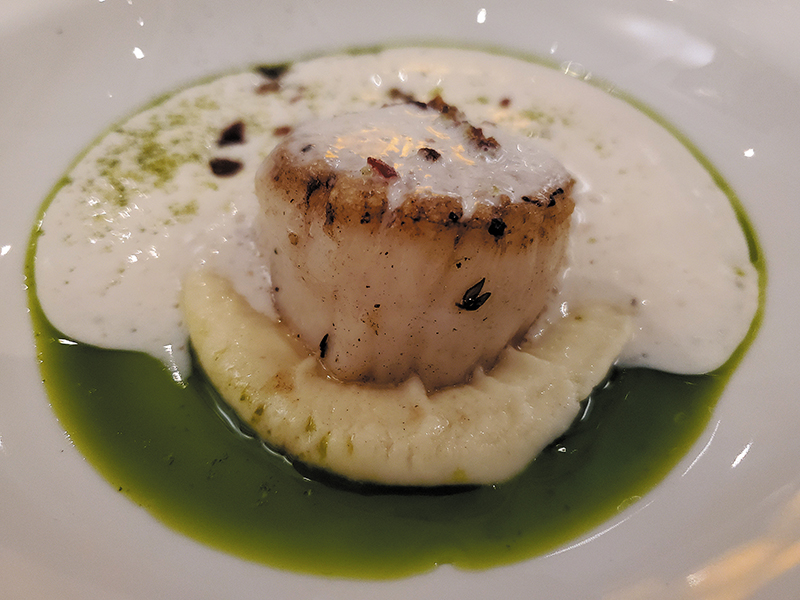 The meal included a seared scallop with bacon foam.

Among other tweaks to the traditional: foams. Parmesan bubbles are spooned over slightly garlicky escargot removed from their shells, and bacon foam surrounds seared diver scallops in a pool of celeriac cream.

Pastry figures into many courses as well, with lamb pithiviers served with grilled lamb chops, and a warm bread pudding served alongside seared foie gras.

Although she’s happy with this restaurant so far, Jourdan is looking forward to her second opening in Lake Worth Beach, Chez Andrea Bistro, in the coming weeks. She’ll take over the former South Shores Tavern on Lucerne downtown, a much larger space that will afford two bars — one wholly for champagne — a dining room and a courtyard. There, a bistro menu will be served.
She calls South Florida, a coastal home to friends and family, a “natural setting” for her foods.

Savor the Avenue returns for its 12th year to showcase restaurants in a five-block-long party on Atlantic Avenue in Delray Beach.
March 23 at sunset, the avenue from Swinton to U.S. 1 will be set up with banquet tables, each decked out as restaurants vie for “Best in Show” tablescape.

Reservations filled up last month. Restaurants hold waiting lists, however, so you may find last-minute seats.

Some of the participating restaurants offer a “Savor Off the Avenue” menu for the night as well. Diners who choose to eat indoors at the restaurants may be offered the same menus as the banquet diners.

The dinner is put on by Delray and Boca magazines along with the Downtown Development Authority. Some proceeds are earmarked for Community Greening, an urban forestry nonprofit in Delray Beach.

For menus, wait lists, and more information about the event, visit downtowndelraybeach.com/SavortheAvenue.

Delray’s Pineapple Grove is the setting for a Wine Walk from 6 to 9 p.m. March 26. Participating businesses include many non-food types in the Grove, such as Hyatt Place Hotel, Nada’s Italy, Claudia Dog Grooming, Salon 5, and others.

They will offer sips of wine and light bites to walkers. Cost is $25 per person.

The Wine Walk is sponsored by Wine House Social, which will stand as the check-in where glasses and swag bags will be given out.
The Beatles on the Beach Festival begins in earnest the next night, and Wine Walk participants are urged to dress in Beatles-era attire (’60s and ’70s, for those not remembering).

Go to www.winehouse-delray.com for all the details and tickets ($25).

The owners’ grandmothers are responsible for several recipes on the menu of artisan breads, pastries, egg dishes, sandwiches, fresh salads, entrees and desserts. The latter include tres leches and Nutella as well as guava cheese croissants.

It’s one of five in this South Florida mini-chain, this one at the Oak Tree valet entrance to the mall. Open daily for breakfast through dinner.

In brief: Boca Bacchanal celebrates everything Bacchus with its exclusive vintner dinners with noted chefs, and its Grand Tasting, the latter of which is still available to the public. It’s 7-10 p.m. March 7 at the Boca Raton Resort & Club. Bring your comfortable shoes; the dine-around features multiple stations of small-bite plates, and 130 wines and champagnes to taste. Proceeds go the Boca Raton Historical Society to fund heritage education programs. Tickets are $125, available at www.bocabacchanal.com. …
Prime Catch in Boynton has completed its renovations and now has opened all its dock space and the new Prime Island bar, surrounded by water as it sits dockside in the Intracoastal. It’s been a total makeover with new menus, all water-view tables and new decor throughout. Go to www.primecatchboynton.com to see photos and get all the details.