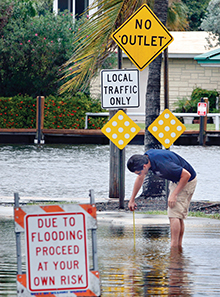 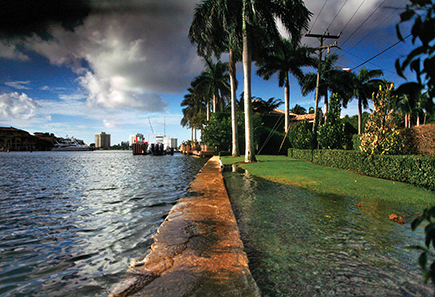 Late October’s extreme tides flooded parking lots and neighborhood roads from Boca Raton to Lantana, reinforcing the need for higher sea walls and other improvements that could hold back rising water in the future.
Pushed higher by an Oct. 27 full moon that was close to the Earth in its orbit, tidewater covered roads around marinas in Delray Beach and Boynton Beach, flooded a Boca Raton neighborhood, inundated the parking lot at Lantana’s Sportsman’s Park and came bubbling up through storm drains along Ocean Avenue in Ocean Ridge.
“It’s not something we can deny any longer,” Delray Beach Vice Mayor Shelly Petrolia said. “In the next 20 to 50 years, we’re going to really see some rising tides.” 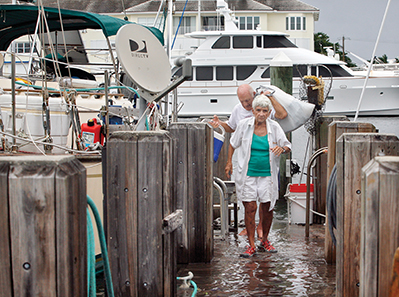 Carol and Dick Simmons wade along the dock in Delray Beach, where their boat was moored.

Petrolia said a regional approach is needed to deal with sea level rise. Remedies worth considering, she said, include opening natural areas along the Intracoastal Waterway that could hold water and blocking off inlets during extreme tide events.
The vice mayor said Delray Beach should begin work now to prevent future flooding problems. She favors a ban on underground parking lots, increasing the minimum floor height for new buildings and studying the cost of higher sea walls.
Extreme tides in late September and October forced the Sea Mist III drift boat to delay or cancel offshore fishing trips. Strong tides made the 72-foot drift sit too high in the water to fit under the A1A bridge at Boynton Inlet, so the captain had to wait for the outgoing tide before heading out. Some trips were canceled. At Lantana Beach, waves pushed up the beach by a stout easterly wind combined with the Oct. 27 high tide pounded the sea wall and gnawed off the wooden steps to the lifeguard stand.
“I’ve found it fascinating,” said Silvia Adelman, who watched water come up through storm drains and puddle on yards near her home in Boynton Isles. “It’s all good until it goes in my house.”

Multiple factors in play
The late September and late October tides were extreme because of special alignment of celestial bodies called perigean spring tide — when the new or full moon coincides with the perigee of the moon, or the point at which the moon is closest to Earth in its orbit.
Extreme tides are predictable, but the tides of Sept. 28 and Oct. 27 were above predicted levels in South Florida. The morning high tide at the Lake Worth Pier on Oct. 27 was 5 feet above the mean low water level, about a foot higher than forecast.
Stephen Gill, chief scientist with NOAA’s Center for Operational Oceanographic Products and Services in Silver Spring, Md., said the fall perigean spring tide tends to be exceptionally high in South Florida because sea levels are already relatively high during the fall.
A slowing of the Gulf Stream current flow, warm ocean water temperatures and easterly winds push water levels even higher.
Sea level rise contributes, too. But so far, that’s been a slow increase — about 10 inches every 100 years in Miami Beach and 13 inches per century at the Lake Worth pier, NOAA tide records show.
Palm Beach County Commissioner Steven Abrams, whose district covers coastal sections of southern Palm Beach County, waded through water on Lake Drive, a neighborhood street south of Palmetto Park Road in Boca Raton, to call attention to the problem.
“Wading in it, you realize the depth of the problem,” said Abrams, who recently returned from a conference on sea level rise.

Cities take varied approaches
Some cities and towns are already taking steps to hold back the water, while others are living with “nuisance” flooding or documenting the extent of the tidal floods to prepare for future work.
In Delray Beach, water covered roads near the city marina. In the hours around high tide, waves from passing boats washed over Marine Way. Schools of small mullet moved through the shallow water on the road at times to the delight of neighborhood dogs.
High water is nothing new for Marine Way resident David Frohman. He said water sometimes flows into the crawl space under his historic house and soaks his floor, forcing him to put his best furniture on blocks. Frohman stacked sand bags beside his house in late October to hold back the water.
Delray Beach officials posted a tidal flood warning on the city’s website and barricaded flood-prone areas, including roads in the Marina Historic District.
John Morgan, the city’s sustainability officer, said Delray Beach has installed one-way valves to keep salt water from flooding streets in some low areas, but he said much more work is needed.
“A number of spots near the Intracoastal Waterway have been problematic for years,” Morgan said. “It’s getting worse as climate is changing.”
The installation of more “flex valves” around the city marina to reduce flooding should be complete in the next few months, Morgan said.
“Raising sea walls and docks is a policy issue that we will have to bring to the commission at a later date,” Morgan said.
Lantana has installed pumps and water-holding structures on Hypoluxo Island and recently elevated the parking lot at the town beach to minimize flooding.
But the flooding of the parking lot near the boat ramps at Sportsman’s Park is a nuisance town officials say they can live with, at least for now.
“For something that happens every so often, it’s not a concern at this time,” Mayor David Stewart said.
Stewart, who has lived on the water in Hypoluxo Island since the late 1970s, said this fall’s king tides are the highest he’s seen since 1984.
The occasional “tidal wash” in the parking lot at Ocean Inlet Park during extreme tide events is not significant enough to warrant improvements, Palm Beach County Parks and Recreation Director Eric Call said.
The town of Gulf Stream is amending its code so sea walls can be built a foot higher than in the past, an effort to hold back sea water during storms and extreme tide events.
The town is sealing drainage pipes to reduce leakage and checking backflow prevention valves, Town Manager William Thrasher said.
Briny Breezes is building a new sea wall around its marina that’s designed to hold back high water, but the work is not yet complete — partly because contractors have not had the low-water conditions they need to finish the work this fall, said Michael Gallacher, president of Briny Breezes Inc.
“The high tides are not topping the new sea wall,” Gallacher said. At Boynton Harbor Marina, occasional parking lot flooding is not considered serious enough at this point to warrant spending money for improvements — at least not for the parts of the marina owned by the city’s community redevelopment agency.
The city of Boynton Beach is considering drainage improvements and installing one-way valves to reduce tidal flooding as part of its stormwater master plan, but problems such as inadequate sea walls on private property will have to be addressed by property owners, Assistant City Manager Carisse LeJeune said.
LeJeune said the area of Boynton Beach east of Federal Highway from Northeast Seventh Avenue to Northeast 10th Avenue is prone to tidal flooding.
During the full-moon high tide in late October, water covered the parking lot at the Harbour Hall Inlet Club condominiums on Northeast Seventh Street in Boynton Beach.
“I dropped my wind insurance, but I kept my flood insurance,’’ said Barbara Shore, who lives near the condominiums on Northeast 10th Avenue.
In Ocean Ridge, extreme tides push water into the natural areas on the east side of the Ocean Avenue Bridge, causing sections of Ocean Avenue to flood.
“The state assured us they would put backflow preventers on the 16-inch pipes, but did not,” Mayor Geoff Pugh said. “Through a series of elevation changes, water backs up onto the roadway.”
Boca Raton officials monitored low-lying areas such as Lake Wyman and Silver Palm parks during the late October high tides, but the city is not planning improvements to reduce tidal flooding, city spokeswoman Chrissy Biagiotti said.
Water puddled on a section of Lake Drive, south of Palmetto Park Road, on the morning of Oct. 27, but it was less severe than the flooding around Delray Beach’s marina.
“The impact to us compared to other areas of the county is minimal,” Biagiotti said.