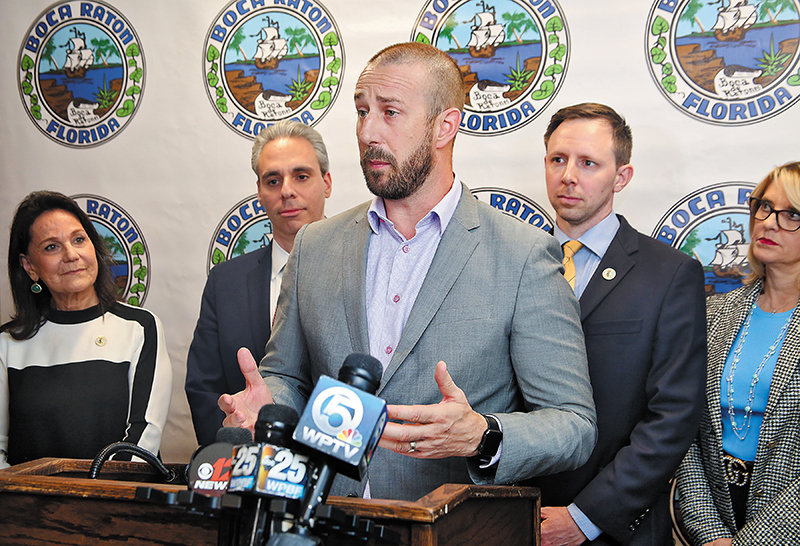 Even before City Council members cast their votes, a euphoric Mayor Scott Singer hailed their approval of a deal that would allow construction of a Virgin Trains station and parking garage on city-owned land.
“This will be a moment of triumph for Boca Raton,” he told residents at a jam-packed Dec. 10 council meeting.
A unanimous council quickly made it official: The city will lease 1.8 acres east of the Downtown Library to Virgin Trains for the much-coveted station and garage, beating out other cities that badly wanted this prize. Even station critics expected no other outcome.
Standing minutes later with Virgin Trains President Patrick Goddard, Singer declared, “Tonight was a great win for Boca Raton.”
“I think it is phenomenal,” Goddard said. “Creating mobility is what we are all about.”
But before shovels hit the ground, the city and for-profit rail company have more work to do.
Virgin Trains will submit a site plan for the station and garage that the council must approve. The plan will provide project specifics, such as the final designs of both buildings, which could spur new objections from station opponents.
Virgin Trains also will submit a study on how the station and garage will affect traffic on nearby streets. The traffic analysis will be used to determine if any road changes or improvements are needed. If so, decisions will have to be made on how to pay for them.
The City Council must approve a temporary parking lot on city-owned land south of the Downtown Library that patrons can use while much of the existing library parking lot is blocked off during station and garage construction.
One significant matter remains unresolved. Virgin Trains wanted the construction of an elevated pedestrian bridge that would let people walk safely across busy Dixie and Federal highways to Mizner Park.
Deputy City Manager George Brown said at the Dec. 10 meeting that the bridge may not be feasible since it would need approvals from Florida East Coast Railway, the county, state and property owners.
The bridge could cost between $7 million and $12 million. The potential price tag is high because the bridge likely would need to be enclosed and air-conditioned due to Florida’s climate. That has prompted concerns about vagrants camping out in the bridge.
An alternative is an enhanced pedestrian walkway at ground level that is less costly and easier to achieve, Brown said.
While Virgin Trains hasn’t crossed the finish line yet, the rail company is expected to move just as quickly to iron out final matters as it did to get the long-term lease. The city and company reached an agreement less than five months after Virgin Trains said it wanted to build a station in the city.
Virgin Trains hopes to break ground in February or March, with the station completed and operating by the end of 2020.
Residents filled every seat in the council chambers and spilled into an overflow room for the chance to speak for or against the project. More than 60 voiced their opinions during the nearly six-hour meeting.
Key business groups, employers and many residents are thrilled to have a station, saying it will lure more companies to locate in the city, increase property values, draw visitors to cultural venues and provide an alternative to clogged Interstate 95 to reach West Palm Beach, Fort Lauderdale and Miami, where Virgin Trains already has stations.
“It certainly is a game-changer for our city,” said Troy McLellan, CEO of the Boca Chamber. “The overwhelming support throughout the city is loud and clear.”
Jorge Pesquera, CEO of Discover the Palm Beaches, said having a station in Boca Raton is like “winning the lottery.”
But residents of the Library Commons neighborhood just north of the station site objected to a 4.5-story garage looming over their homes and fear Virgin Trains eventually will damage the character of the area by developing adjacent city-owned and privately owned land.
Supporters of the heavily used Downtown Library also worry about the potential for multistory development and patrons losing easy access to the building.
Others expressed doubts that Virgin Trains is financially viable and sharply questioned city officials about their rationale for leasing land to the rail company for the nominal amount of $1 a year and paying most of the cost of the garage.
“It is basically a giveaway to a private company,” said Manju Pendakur, a retired Florida Atlantic University professor.
Library Commons resident Charles Bennardini said Virgin Trains’ goal is to develop land near the station.
“They are interested in using your tax dollars to further their revenue interests,” he said.
But opponents failed to sway council members.
“This is about an opportunity, a rare opportunity,” Singer said, later adding, “This is an investment worth making.”
Council member Andrea O’Rourke said 98% of the emails she received about the station came from people supporting it.
“To have the opportunity to have this train station is invaluable,” said council member Monica Mayotte. “The economic value this station will bring is evident.” 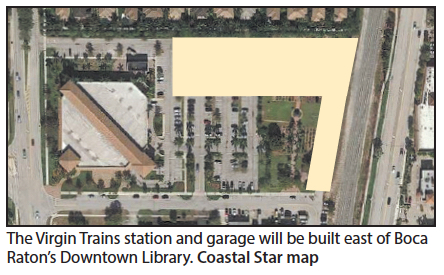 Virgin Trains will pay for the $25 million station and nearly $2 million for 64 garage spaces on the ground floor reserved for library patrons, who will park at no cost and will have their own garage entrance.
The city will pay the lion’s share — nearly $12 million — of the remaining cost of building the 455-space garage, which Virgin Trains will operate and maintain. Virgin Trains will give 50% of the garage revenues to the city. Drivers who don’t use the train or library also will be able to park in the garage.
The city’s share of garage cost will not result in a tax increase, Brown said. The money is coming from city reserves.
The city considers the lease a land sale because of its length. The initial lease term is 29 years but with renewals could total 89 years.
Virgin Trains initially asked the city to donate about 4 city-owned acres east and south of the Downtown Library. It wanted to develop about half of that.
The company put development plans on ice after hearing strong objections from residents, but that does not mean they have been scrapped. Virgin Trains has a right of first refusal if the city decides to sell the property after Dec. 31, 2024. The city would not sell it before then.
City code requires any sale or lease of city property to be done at fair market value. There is an exception, however, for the sale or lease of property that would be of “significant economic benefit” to the city.
Virgin Trains provided an economic impact study that says the station will contribute $15.5 million annually in economic benefits, including $10.9 million in money spent by visitors using the train to come to Boca Raton.
In a concession to Library Commons residents, Virgin Trains agreed in November to push the garage 25 feet south. Adding in a 20-foot easement, there will be a 45-foot buffer between the neighborhood and the garage.
The rail company also will pay up to $300,000 to relocate the Junior League of Boca Raton’s Community Garden, which will be displaced by the station and garage. City officials have identified Meadows Park as a potential new location for it because it has ample parking, room for expansion and is pesticide-free.
While that doesn’t satisfy some of the avid gardeners, most Junior League members and gardeners who spoke at the Dec. 10 meeting supported the Meadows Park location.
Virgin Trains’ financial viability remains a concern for some residents. A consultant’s report to the city found that while ridership and revenues are increasing, both fall significantly below projections.
But Jose Gonzalez, executive vice president of Florida East Coast Industries, told council members that the projections cited by Colliers International are outdated because they are based on Virgin Trains’ having service to Orlando. FECI is a subsidiary of the private equity firm that operates Virgin Trains.
Although the Orlando station is built, the start of service was delayed by litigation and is now expected to begin in 2022, he said.
Virgin Trains was on track to have 934,000 passengers in 2019, which Gonzalez said nearly meets the company’s targets.
The company also has approvals to build stations at PortMiami and Aventura. Those and the Boca Raton station will increase ridership by 2 million passengers once they are operational, the company has said.
To protect the city against the possibility that Virgin Trains could go out of business, its deal with the rail company says it may terminate the lease for the station and garage land if the company discontinues service or service diminishes substantially.
In that worst-case scenario, the city would take over the parking garage and could repurpose the train station for other uses.
Virgin Trains, the rebranded name of Brightline, has drawn scrutiny for the number of people who have died on its tracks.
While all railroads in South Florida have struck people, Virgin Trains is responsible for the most deaths, according to an analysis by the Associated Press.
None of the deaths was caused by crew error or faulty equipment, according to federal reports. The majority have been suicides, while others involved people who tried to beat the train or ignored gates and warnings.
In early December, Goddard said the company would contribute $150,000 to support the 211 Palm Beach/Treasure Coast Helpline, a service for people with mental health issues.
That would be added to $500,000 in state funding that State Rep. Mike Caruso, R-Delray Beach, is seeking in a bill intended to reduce the number of suicides by train.
The Florida Department of Transportation also has announced it will spend $60 million to make safety improvements to more than 4,000 rail crossings over the next two years.