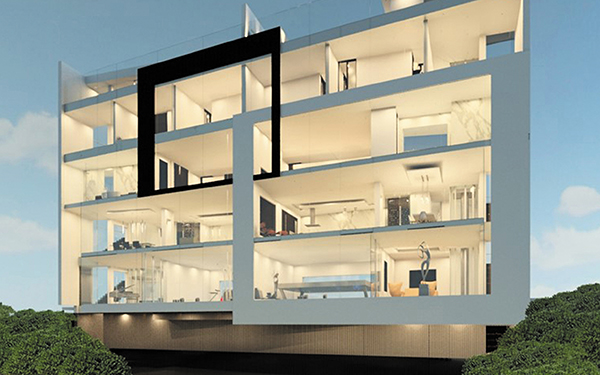 ABOVE: The ultra-modern four-story duplex could feature wide open glass exposure on the beach side. BELOW: The side facing A1A would have access to the four-car garage. Renderings provided 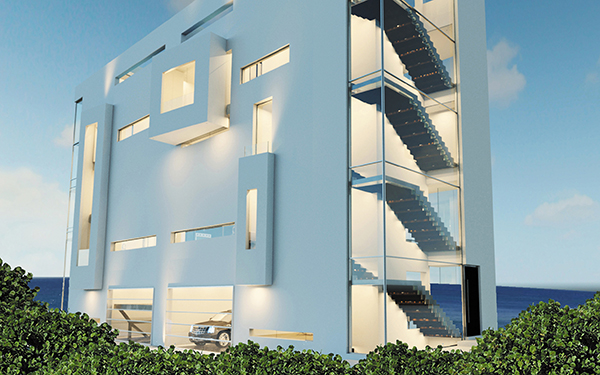 A volunteer group led by a barrier island resident is mounting a last-ditch effort to stop construction of a four-story duplex on the beach between Spanish River Park and Ocean Strand — the second project planned in the area.
Boca Save Our Beaches opposes the 14,270-square-foot project planned for the east side of A1A at 2600 N. Ocean Blvd. The proposal is hurtling toward a City Council showdown perhaps as soon as October.
In late July, group founder Jessica Gray opened an online fundraising campaign with a goal of $5,000.
“Once our beaches are gone, we cannot get them back,” she wrote on the GoFundMe.com website.
Gray’s group also collects PayPal donations via a link on www.bocasob.com, its main webpage. So far the group has about $4,000, she said.
The group equally opposes a 10,432-square-foot house proposed for a parcel two lots south, at 2500 N. Ocean Blvd. That project sparked Gray to form Boca Save Our Beaches in December 2015, right after the City Council granted a zoning variance allowing the single-family mansion to be built on a parcel less than 100 feet wide. Gray and other furious residents complained that the structure  would change the face of the beach, disorient nesting sea turtles and set a precedent for more development.
The proposed duplex site is wide enough not to need a zoning variance, but both sites will need the council to grant a variance for building seaward of Florida’s restrictive Coastal Construction Control Line.
The state issued 2500 N. Ocean a “notice to proceed” in October, ruling that the project would not “weaken, damage or destroy the integrity of the beach and dune system.”
Boca Raton’s procedure for granting a CCCL variance is separate from the state’s.
“Neither project is currently scheduled for Environmental Advisory Board or City Council review,” city spokeswoman Chrissy Gibson said.
But the city sent coastal engineering consultant Applied Technology Management Inc. the 2600 N. Ocean duplex’s applications for the CCCL variance and EAB review on June 26, Gibson said. It has until Aug. 8 to return its recommendation.
ATM’s review must be put on the environmental board agenda within the following 30 days, and the board’s recommendation must go to the City Council 30 days later.
Gibson said paperwork for the CCCL variance and EAB applications at 2500 N. Ocean has not been sent to the consultant yet because the applicant has not provided an updated environmental assessment.
Each side of the planned duplex will have four bedrooms, five full baths, one half-bath, a glass elevator and a four-car garage, according to Delray Beach-based Azure Development, which is marketing the site. It will also boast a 40-foot boardwalk and a rooftop swimming pool. No price has been set, Richard Caster, an Azure principal, said.
Gray, 31, moved to east Boca Raton in 2004 to attend Florida Atlantic University and fell in love with the area. She moved to the barrier island four years ago.
“I’m right in front of these two properties,” she said.
She and the group’s two other directors sponsor events to create awareness and raise money. Attendance varies from 50 to 140, she said.
The mission of the group is clear on its Instagram page: “Boca Save our Beaches was organized in Boca Raton, Fla., with one purpose: to save our beaches from coastal construction.”