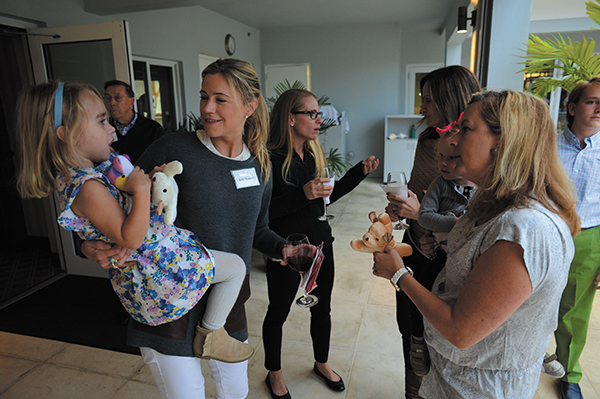 A light rain did not spoil a family event at the club. Holly Wamser and daughter Libby talk with Taylor Morris. 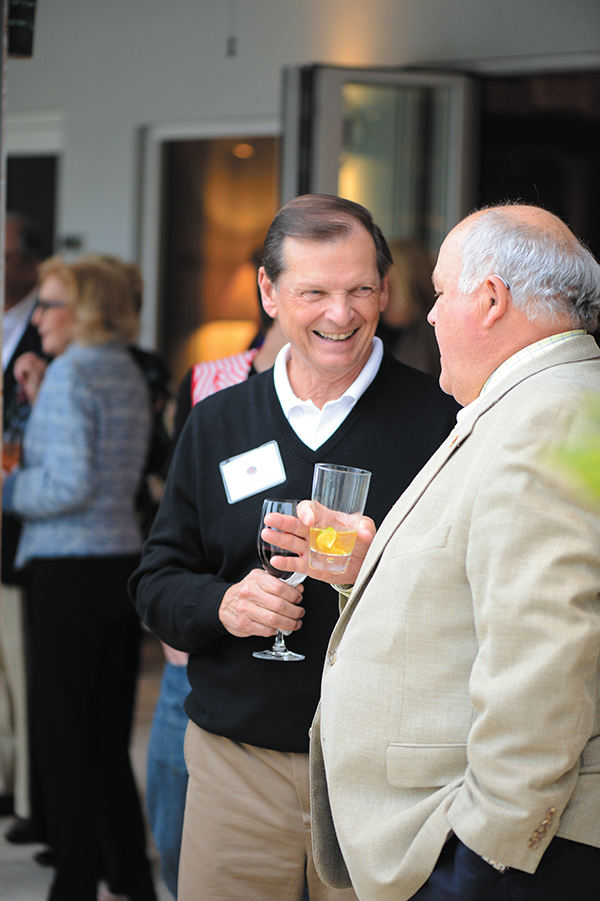 The combination of changing demographics and having a neighboring club going through extensive renovations has helped prompt St. Andrews Club of Delray Beach to launch a summer membership program for 2017.
St. Andrews introduced a limited summer program last year highlighted by what General Manager Robert Grassi called an informal “Grillin’ and Chillin’” cookout every Wednesday night.
It went over so well that Grassi and the board of directors have decided to keep the club open through the summer and offer memberships spanning May 1 to Oct. 31.
“The membership said, ‘We really like this. Can you do more of this?’” board member Mark Mayer said.
“And Robert’s thought was, well, we’ve got a beach, pool, a golf course we take care of, tennis courts, fitness center, croquet. We should stay open not only because we have more members here year-round, but there are just more people in the area in the summer than there used to be.”
Further incentive was the fact the nearby Gulf Stream Bath & Tennis Club is undergoing extensive, multimillion-dollar renovations this summer and its year-round members have reciprocal privileges at St. Andrews.
A bad break with the weather resulted in what Mayer now considers only a small setback for the plans. The club invited 15 families for an introductory look-see on Jan. 29, which turned out to be a raw, rainy day on which temperatures never rose above the 50s. With the Super Bowl set for the following Sunday, there was no chance to reschedule.
“So we went ahead and did it, and what we heard was, ‘We never knew this was here.’ So we at least got to show off the property,” Mayer said. Another family day, by invitation only, is set for March 5.
Few other clubs in the area can even approach what St. Andrews has to offer. Located on both sides of A1A just north of The Little Club and adjacent to the county-owned Gulf Stream Park, St. Andrews has an 18-hole, par-54 Pete Dye golf course that has been recognized as a Certified Audubon Cooperative Sanctuary, a world-class croquet court, a family-friendly beach area, state-of-the-art fitness center, guarded pool and several dining rooms.
The Little Club, open year- round, has also extended an invitation to Bath & Tennis Club members to use its facilities this summer only.
Long-standing member Donna Ayers, who owns one of the 136 apartments on the grounds of the St. Andrews Club, said she’s seen a remarkable transformation in membership from older adults to younger families in recent years.
“It’s become much younger,” Ayers said. “It’s amazing what has happened to this club in the last five years.”
Mayer said that, while the pool remains popular, families with children more and more head for the beach.
“Every year they ask, ‘Can we get more lounge chairs?’” he said.
Ayers credits head lifeguard Connie Case for much of the surge in younger families. Case plays guitar when the club stages bonfires on the beach and organizes events for the kids.
“She’s amazing,” Ayers said. “She’s brought in activities. She’s got the kids playing tennis, golf, out on paddleboards, teaching them about turtles. It’s a great program.”
The prominence of the croquet program was underscored when world champion Stephen Mulliner of England paid a recent visit. David Bent, who is onsite pro for both the tennis and croquet programs, is ranked nationally and internationally in croquet.
As for the par-3 golf course, legendary course architect Dye, who redid the greens and tees two years ago, came by to play a round in early February. Both electric and pull carts are available. Tee times are not required.
New club members must have one existing member sponsor.

For more information about the summer membership program, contact GM Robert Grassi at 266-5714 or email robert@standrewsclub.org.