A leatherback hatchling makes its way into the ocean in Boca Raton after a release by Gumbo Limbo Nature Center. Photos by Tim Stepien/The Coastal Star

Walk along the beach at Red Reef Park in Boca Raton and it’s hard to miss evidence of a bumper crop of sea turtle nests so far this season.
Dozens of nests, each cordoned off in triangulated sections with orange wooden stakes, dot the sand along the city’s 5 miles of beach.
Also marked in the sand: fresh tire-like tracks from adult loggerheads, greens and leatherbacks going from and back to the ocean after dropping and burying their eggs, along with much smaller tracks from new hatchlings headed to the ocean.
“The season has been extremely busy, I mean, record breaking,’’ David Anderson, the sea turtle conservation coordinator at Gumbo Limbo Nature Center, said as he stood at the shoreline just before sunrise on a July morning.
“I keep running to Home Depot to buy more wooden stakes,’’ he said. “We usually get 700 or 800 loggerheads a year and we are already well over 700. We are on pace to possibly have an all-time record high of loggerhead nests this season.’’

Boca’s sea turtle monitor says there’s no rhyme or reason to the booming number of nests — each season is unpredictable.

Sea turtle nesting season started March 1 and ends Oct. 31.
Five species of marine turtles nest in Florida, but only three — loggerheads, leatherbacks and greens — typically come ashore on South County beaches. All five species are listed as endangered or threatened and protected under the Endangered Species Act.
Last year, Gumbo Limbo counted 647 loggerhead nests, 21 leatherback nests and 190 greens. As of July 20, those numbers were 837, 19 and 116, respectively.
Although the pace of loggerhead nesting historically slows down in August, Anderson said, Boca Raton will at least come close to breaking the record of 1,075, set in 1990.
Just to the north, nest counts in Highland Beach are trending up, too: 719 loggerheads, 13 leatherbacks and 159 greens as of July 15, compared to 814, six and 284, respectively, all of last year.
“We’re doing gangbusters. We are definitely having a banner year,’’ said Joanne Ryan, who monitors sea turtle nests along the town’s nearly 3 miles of shoreline.
Lexie Peterson of Sea Turtle Adventures, a nonprofit that monitors a 3-mile stretch of beach that includes Briny Breezes, Gulf Stream and parts of Ocean Ridge, reported “a pretty good season so far.’’
As of July 19, the count was 515 loggerhead nests, 50 green and nine leatherbacks. Last year, the group counted 666 loggerheads, 76 green and 24 leatherbacks.
For the other parts of Ocean Ridge, about 2.5 miles of beach, Christine Perretta of DB Ecological Services counted 425 loggerhead nests, 12 green and 10 leatherbacks as of July 20. Last year, those numbers were 318, 51 and 16, respectively.
In Delray Beach, sea turtle monitor Joe Scarola said the numbers were not as dramatic but still on pace for a robust finish.
As of July 1, he’d counted 248 loggerheads, eight leatherbacks and 11 greens. Last year, the tally was 356 loggerheads, 15 leatherbacks and 28 greens, he said.
“It started off with a bang, like we were going to break all records again this year. But it kind of slowed down in June. We are pretty much on par for what we had last year,’’ said Scarola, who patrols the city’s 3.4-mile shoreline.
In South Palm Beach, there were 300 loggerhead nests, 12 green and one leatherback as of July 20. The totals for last year were 214, 19 and one, respectively.
There’s no rhyme or reason to Boca’s high numbers this year, said Gumbo Limbo’s Anderson, emphasizing that every season is unpredictable.
He pointed out how it takes 25 years for loggerheads to reach sexual maturity and reproduce. Female marine turtles nest every two to three years.
“Maybe it’s good news that the population is doing great and conservation efforts from decades ago are starting to finally make a difference,’’ he said.
What is certain is that Anderson and his other seven sea turtle conservation team staff members have been busier than usual this year. A leatherback hatchling measuring a few inches heads to the sea along the Boca Raton shore. BELOW RIGHT: A nesting sea turtle left its tracks in the sand at Boca Raton. 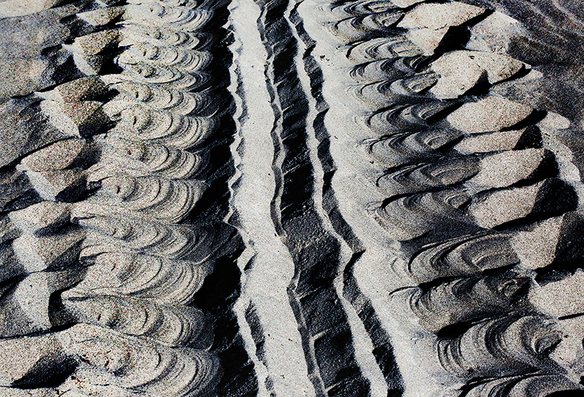 Hatching season at peak
Every morning during nesting season, they divide into three groups and search the city’s 5 miles of beach for evidence of nesting activity from the previous night.
They’ll follow female tracks and mark new nests with stakes and a sign to keep the area protected so the 100 or so eggs deposited in each nest are safe during the two-month incubation period.
They’ll check previously marked nests to see if they had any hatches or have been disturbed by foxes, raccoons and birds. Three days after a nest hatches out, the team will excavate and take an inventory of what was inside to determine its success.
Any live hatchlings they find are brought back to Gumbo Limbo Nature Center and are released on the beach at night or just before sunrise.
All nests, including so-called false crawls when the mother turtle emerges from the ocean but doesn’t lay eggs, are recorded with GPS and tracked on iPads.
“We are also in the hatch-out season, so we have been having a lot of nests hatch out, which is really cool to see,’’ said Peterson, of Sea Turtle Adventures.
“It looks like the sand is boiling and you see a bunch of baby turtles pop up and all 100 at once will hatch and make their way down to the water following the moon and the stars.’’
Gumbo Limbo and Sea Turtle Adventures offer periodic hatchling release tours, but the tours scheduled for the rest of the summer are sold out.
For more information, go to www.myboca.us/2133/Turtle-Walks-Hatchling-Releases and www.seaturtleadventures.com/event-registration.
The tours raise money that goes back into the turtle monitoring programs. They also help raise awareness about conservation efforts, including ongoing campaigns to eliminate beachfront street lights and house lights that distract sea turtles.
“The best way you can get people to care about sea turtles is to see them,’’ Peterson said.
Although there’s no guarantee tour participants will see an adult turtle or a hatch-out, the rest of Gumbo Limbo’s night tours will feature live hatchlings.

From bucket to ocean
“For the rest of the summer, we are going to have buckets of hatchlings to release every single night,’’ Anderson said as he stood at the shoreline before sunrise on a Monday in July.
He reached into a bucket and, one by one, released onto the sand nine loggerhead hatchlings, discovered a day earlier during a nest inspection. After the first few waves lapped over them, the hatchlings headed to the ocean in the direction of the glow from the approaching sunrise on the horizon.
A minute or so later, he released six leatherback hatchlings.
“It’s amazing,’’ he said, watching them scramble into the sea. “Millions of years of instinct. They know exactly what to do and where to go. Those loggerheads will swim 5, 10, 15 miles off shore until they reach the edge of the Gulf Stream current where the large mats of sargassum seaweed are, and that will be their home for a while.‘’
With so many predators to elude, hatchlings’ chances to survive to adulthood are about 1 in 1,000. If they reach the Gulf Stream current, those odds improve.
“They will be well camouflaged, have something to eat and be able to hang out amongst those mats and at the mercy of the ocean currents for the next few years of life until they reach juvenile size and they’ll return to the coastal waters,’’ Anderson said.
“They have incredible navigational abilities to migrate to feeding and foraging grounds and back to nesting grounds, on an every-other-year cycle, and sometimes to the exact same spots. It’s pretty amazing.’’