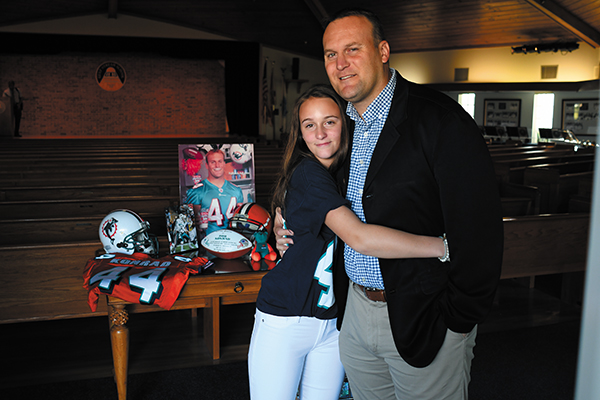 Dakota Konrad, an eighth-grade student at Gulf Stream School, said her father —former Miami Dolphins fullback Rob Konrad — has always been a determined person.
In her eighth-grade speech, delivered with accompanying photos in a school chapel filled with her classmates and teachers, Dakota also said her father is tough and tenacious.
He recovered from knee injuries and trained hard enough to become a pro football player. Konrad was drafted by the Dolphins in 1999 and played fullback for them until 2004.
In her speech, titled “Just Keep Swimming,” Dakota said her father has always taught her and her sister never to give up if they want to achieve something.
Circumstances forced Konrad to prove just how determined he was on Jan. 7, 2015 — the day he decided to do some fishing by himself while running his 31-foot Grady-White boat along the coast of Palm Beach County for a routine trip to the shop.
The ocean was rough that day. He had the boat steering on autopilot when a fish hit and Konrad moved to the stern to fight the fish.
As he was reeling the fish in, a wave rocked the boat and Konrad fell overboard, still holding the rod with the fish attached.
He was about 9 miles off the coast and not wearing a life jacket. His boat kept going, headed east on autopilot.
Konrad, then 38, tried to chase the boat at first, then decided to swim west toward land. With sea surface temperatures in the low 70s, ocean water was sapping his body heat and energy.
“My dad started swimming toward the setting sun,” said Dakota, dressed in a No. 44 football jersey, the number her father wore for the Dolphins. “Since my dad kept swimming, each stroke was heating up his body.”
At home, nobody suspected anything was wrong until Konrad didn’t return that evening. The Coast Guard initiated a search. Dakota said she and her sister remember seeing their mother crying on the phone.
Meanwhile, Konrad was swimming in the dark. Jellyfish stung him. A shark circled him. He saw lights from a Coast Guard helicopter, but they didn’t see him in the waves, Dakota said.
Konrad just kept swimming, alternating between breaststroke and backstroke, headed toward lights along the coast.
Dressed only in his underwear, Konrad pulled himself onto the beach in Palm Beach and rang the doorbell at the nearest home he could find. It was 4:40 a.m. and he had been swimming for 16 hours, a feat so impressive that skeptics didn’t believe his story at first.
A security guard was patrolling the oceanfront home where Konrad finally came ashore. The guard saw Konrad approaching the house and called police. Police knew Konrad was missing because the Coast Guard had been searching for him. They wrapped him in a blanket and drove him to Good Samaritan Medical Center in West Palm Beach.
His boat was found near Deadman’s Reef, a snorkeling spot near Freeport on Grand Bahama Island.
Dakota said her father told them he focused on her and her younger sister, Brooke, who were 10 and 8 at the time, to give him the strength to reach land.
“He told us we were the reasons he made it home,” Dakota said.
Konrad’s ocean experience drove home a key message in his daughter’s speech: “You can absolutely do anything if you put your mind to it,” she said. “I will live by this motto for the rest of my life.”
Dakota’s speech was immediately followed by hugs from her classmates, teachers and her parents.
“Dakota’s speech resonated with every student, parent and teacher in the chapel that day,” said Mari Bianco, Dakota’s English teacher. “Students couldn’t imagine losing their parents. Parents couldn’t imagine not fighting to reunite with their children.”
Konrad, who grew up fishing and boating off the coast of Massachusetts and lives in Boynton Beach, still takes his family boating, both in Florida and in Cape Cod during the summer. As a precaution, Konrad said, he wears an electronic kill switch that would shut off the boat’s engines if he were to fall out again.