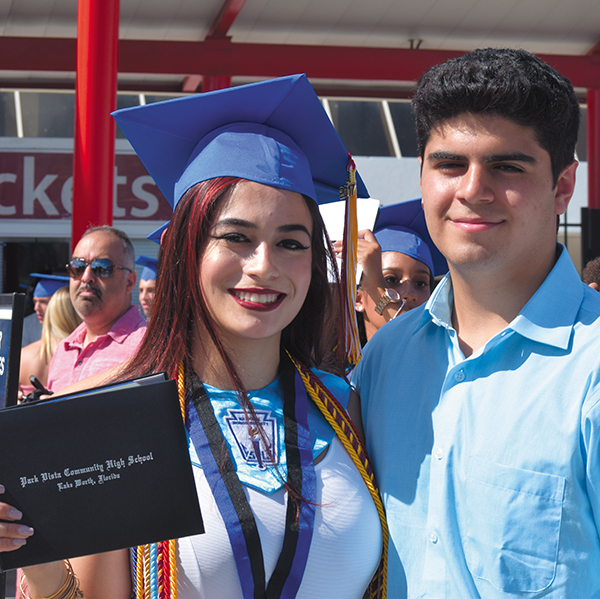 Carlos Rivera with his sister, Adriana, at her high school graduation. Carlos likely will follow her to the University of Florida, unless Southern Cal calls. Photo provided

Senior Carlos Rivera, a native of Lake Worth, chose Atlantic High School in Delray Beach for his high school because of its “very rigorous” International Baccalaureate diploma program. He knew it would give him the best chance of achieving his dreams for college.
Rivera is a filmmaker and writer whose biggest project is an 84-minute feature film called The Usuals: Or the Helpfulness of Others and How to Use It, which he wrote, directed, produced and starred in.
“Not to sound too corny, but the main theme is friendship. It’s a story about how we’re all interdependent,” Rivera says.
“I’ve always loved writing,” he says. His dad, Carlos A. Rivera, an engineer, and his mom, Odemaris, a freelancer with Estee Lauder, encouraged him. They self-published his first book, The Lost and the Holocaust, in 2013 when he was 12. The story follows teenage survivors living through a second holocaust. Rivera admits it’s not historically accurate — hey, he was 12 — but it does show his affinity for history and his appreciation of its lessons.
Rivera is also fascinated by cultural anthropology and linguistics and plans to focus his studies on those subjects as well as film production in college.
He’s been accepted into both Florida State and the University of Florida, but he’s anxiously awaiting a decision from his first choice, the University of Southern California, as long as there’s a satisfactory scholarship package attached. He’s also considering New York University. If he chooses UF, he’ll already have a supporter in place: His sister goes to school there.
Film study will put Rivera in a competitive career path, but he has already proved he’s a critical watcher and a watchful critic. His analysis of the Coen brothers masterpiece No Country for Old Men, which won an Academy Award in 2008, is thorough, thoughtful and astute.
“My dad is definitely big on good movies,” Rivera said. “He’d have my sister and me sitting on the couch watching movies over and over.” It’s where he learned what makes a movie compelling to watch.
Although he’d like to make his own films using his own stories, there are a couple of books he’d like to try to turn into films. One is Joseph Conrad’s 1904 seaboard tale, Nostromo.
“I’m really into history and I’d love to adapt a piece from history. The other is the ‘unfilmable novel,’ ” Rivera said, referring to Cormac McCarthy’s Blood Meridian.
In fact, Rivera tweeted in January: “I will be the guy who adapts Cormac McCarthy’s Blood Meridian into a film by the time I am thirty-five.”
Rivera said much of the difficulty of converting literature to film is the condensation of the plot. “Two or two and a half hours, that’s the sweet spot. How do you tell the story in that time?” he said. “What works best is thinking of both art forms independently. You need to use the book as inspiration to make the film. Following the plot too closely may lose the message. Following the themes may lose the story. How do you keep both?”
Directors Martin Scorsese and Ridley Scott have both been connected at some point with the Blood Meridian project, as have Tommy Lee Jones and John Hillcoat. But as yet no film version exists of one of the greatest American novels ever written.
In his own writing and filmmaking, Rivera said, “I like to get a bunch of characters together in a grand mosaic of people interacting. I see life as this interconnecting thing.”
Rivera was Atlantic’s nominee in the communications category for The Palm Beach Post’s Pathfinder scholarship.
Rivera will graduate in the top 5 percent in his class at a school known for its academics. He credited his teachers at Atlantic for challenging him and pushing him to be the best student he could be, but he laughed when he remembered “the best advice” he got from a teacher in his first AP class, World History.
“We had to write an essay, and mine was extraneous and it was just too long. I got a note from the teacher that said, ‘Cut the bullshit and get to work.’
“It was good advice,” he said, laughing again. 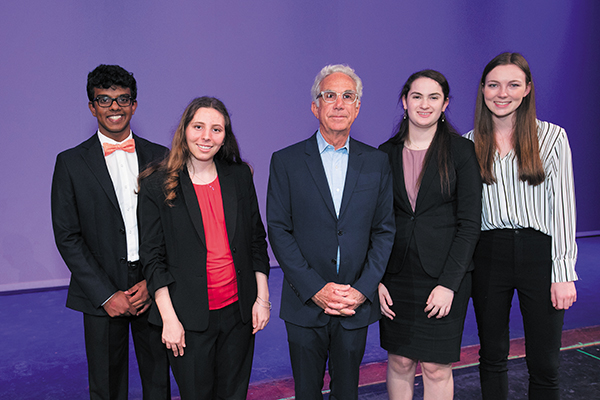 Philanthropy Tank awards announced
In March, we wrote about the community-minded students participating in the third annual Palm Beach Philanthropy Tank program, in which they pitched solutions for issues such as cleaning up the environment and bringing music lessons to underserved kids.
Each group of eight finalists made a presentation to a four-judge panel March 12 at Dreyfoos School of the Arts in West Palm Beach and received grants totaling $100,000 from local philanthropists who are part of Advisors for Philanthropic Impact, which developed the Philanthropy Tank.
The project we profiled, Hurricane Helping Hands, received a $12,000 grant to provide emergency hurricane supplies to low-income older adults. The group consists of Zoe Deitelbaum, Brianna Detamore, Kiah Kimpton and Naven Parthasathy, all students at American Heritage School in Delray Beach.
Other awards were:
Surface 71 — $12,000. Reduce plastic use, improve marine habitats, educate and promote awareness about our environment.
Shoes2You — $14,000. Collect and distribute gently used and new shoes for adults and children in need in Palm Beach County and abroad.
Read With Me — $10,000. Provide people with dyslexia an opportunity to practice reading in stress-free environments.
Uniformity — $7,000. Assist western Palm Beach County students in need to obtain uniforms mid-year so they can focus on academics and not their appearances.
Aquaponics Educational Enrichment — $15,000. Construct two more outdoor aquaponics systems at a middle and elementary school to promote sustainable farming and donate produce to organizations in need.
Find the Keys Music Program — $15,000. Offer free music camps, lessons and instruments to underprivileged and musically ambi­tious students throughout the year.
Cancode — $15,000. Provide computer programming classes and teenage mentors for young minds across Palm Beach County.
The judges, who also serve as donors and mentors to the winners, were Palm Beach residents Jim Karp, John Scarpa, Christine Stiller and Rick Stone.