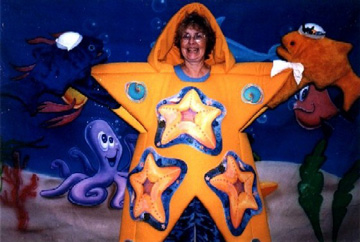 By Ron Hayes
Sally Leyenberger came to Delray Beach in 1978, and for the first decade or so, she was an average citizen. She did not attract attention. She did not spread stories.
And then, in 1988, Sally Leyenberger turned herself into a big red dog, and the stories began.
Since then, she has become a starfish, a snowman, a Mad Hatter and dozens of other, shall we say, “characters.”
At 2:30 on Sunday afternoon, Oct. 10, she’ll greet children as a caterpillar, tell them a story about caterpillars, and say goodbye as a butterfly during “Fall Fun at the Lantana
Nature Preserve.” Sponsored by the Friends of the Lantana Nature Preserve, the free event will be held from 2 to 4 p.m. Geared to children ages 5 to 10, it will also feature games, prizes and drinks.
“My mission statement says I want to delight, amaze and educate through storytelling,” Leyenberger said during a recent chat at Starbucks on Atlantic Åvenue, where she showed up dressed as herself. “But do you want to see why I really do it?”
She opened a scrapbook to a snapshot of children listening to one of her stories. She is not in the picture, but the expressions on the faces of those 4- and 5-year-olds, sprawled on a floor, chins in hand, grinning, tell a story of their own.
“That’s why I do it.”
In a sense, Leyenberger’s own story is also one of transformation. Instead of a caterpillar who became a butterfly, she was a grieving widow who found a new zest for life through storytelling.
After working for 24 years as a bookseller and bookstore owner, she combined her bookselling experience with a love of storytelling, used connections in the publishing industry to obtain permissions, and began appearing at summer camps and public schools as Clifford, the Big Red Dog.
In time, her business, Pretend Party Productions, grew as big as a big red dog.
She developed other characters — the Cat in the Hat, a dinosaur, a monkey, a snake. A pirate, a pumpkin, a sugar plum fairy.
“I used to be a princess,” she says with a laugh, “but I’m too old, so I changed it to a duchess.”
As the Mad Hatter, she changes hats to teach children about the jobs each new hat represents.
As Safari Sal, she leads them on an imaginary visit to Africa.
For her Arctic adventure, Leyenberger appears as a snowman, and brings along a Sno-cone machine to delight those Florida natives who have never seen snow.
Today, she appears as 32 different characters, garbed in custom-made costumes from Costume World in Deerfield Beach.
After each appearance, Leyenberer poses for pictures with the children and hands out bookmarks or, for the teachers and parents, bibliographies for future reading on story’s subject.

“The secret of storytelling is simply getting over the initial shyness,” she says. “Everybody has a story, and people are thrilled that you want to share it. All you need is a beginning and an end, and a little piece of yourself in the middle.”
The Lantana Nature Preserve is an ideal spot for stories about butterflies. Situated on 6 acres at 400 E. Ocean Blvd., the preserve offers winding paths through native habitat and mangroves, and includes a real butterfly garden.
At the end of her appearance, Leyenberger said, she will offer each child a packet of milkweed seeds with which to start his or her own butterfly garden.
“This keeps me young,” she said. “I have no children of my own, I’m a widow — this keeps me young.”
For information about Fall Fun at the Lantana Nature Preserve, call
Ilona Balfour at (561) 588-7427.