The 78-year-old museum is set to reopen after a 59,000-square-foot expansion that reorients its entrance and adds a sculpture garden 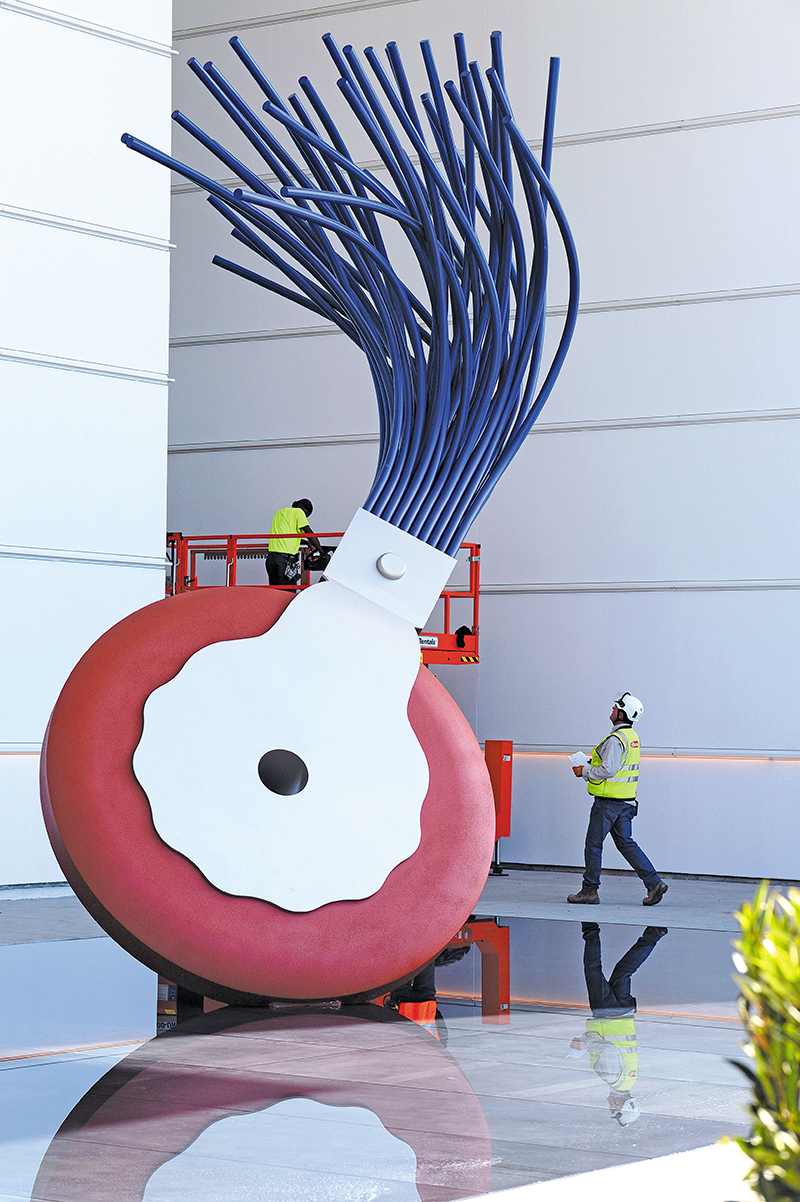 The 19-foot-tall Typewriter Eraser, Scale X, by Claes Oldenburg and Coosje van Bruggen, stands in the Heyman Plaza, which forms the new entrance to the Norton Museum of Art on South Dixie Highway in West Palm Beach. Photos by Jerry Lower/The Coastal Star

A soft blue light descends upon delicate Chinese artifacts housed inside dark cabinets. Each has a dedicated source of light announcing it. From a distance, the mechanism holding them vanishes, leaves them floating like fragile notes on an invisible music sheet.

The room is quiet, ceremonial. The song of hammers and drills can’t touch this sacred space. Nobody dares speak. Not our tour guide. Not even to say how this subtle mastery has been achieved.

If the devil is in the details, something is about to become the most importantly devilish cultural destination in South Florida, and its new favorite one: the remade Norton Museum of Art, which is finally making its debut Feb. 9, having undergone a $100 million makeover.

That minimalist mounting work is one of many understated features of the transformed building, which grew its exhibition space by 35 percent. The extra room affords the Norton’s photography collection its own dedicated gallery for the first time.

“It exceeded my expectations,” said Hope Alswang, the museum’s executive director and CEO, who led the aggressive funding campaign and retires next month. “Because, you know, the renderings are so gorgeous. It’s idealistic. It’s a fairytale. And then you get the building and you are like, this is incredible!” 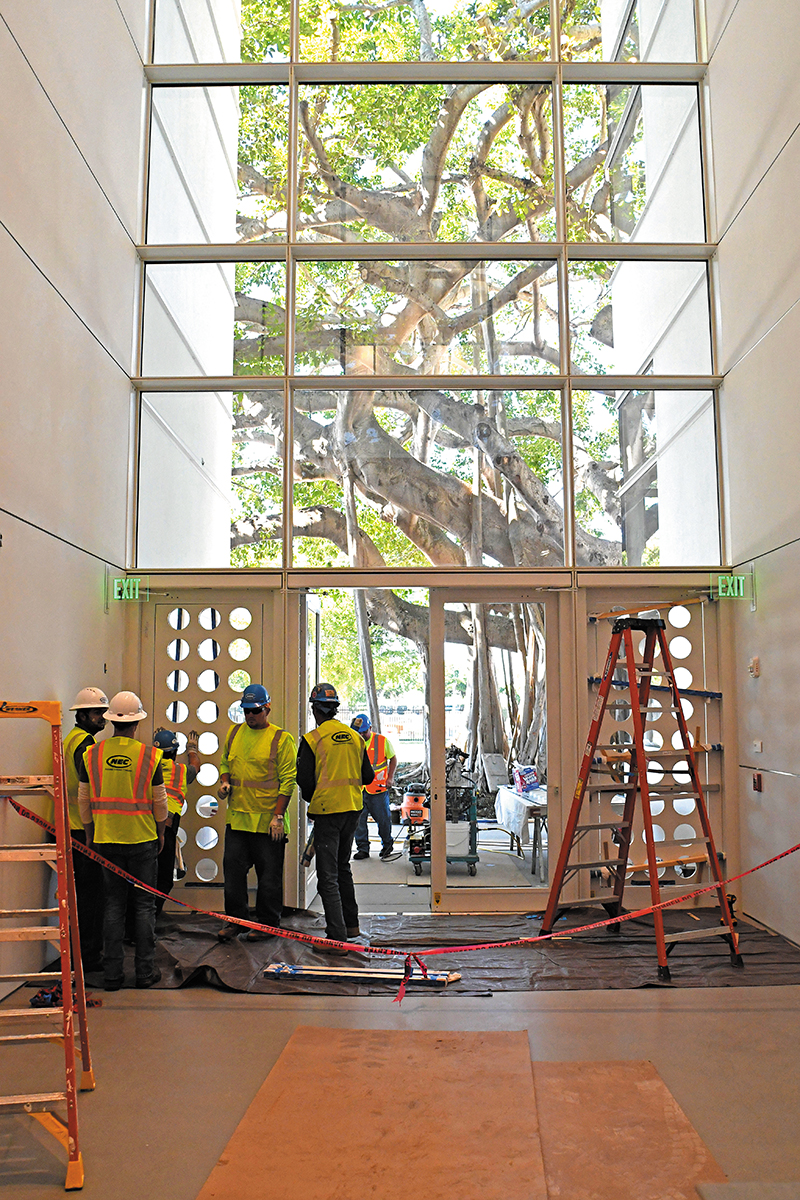 Windows frame a view of the 90-year-old banyan at the entrance to the Norton Museum of Art. Designs throughout the museum echo the circular motif on either side of the doors.

The most noticeable change is the dramatic main entrance, now facing South Dixie Highway, which is framed by a monumental ancient banyan tree to the left and a curious 19-foot pop-art sculpture to the right. Typewriter Eraser, Scale X, by Claes Oldenburg and his wife, Coosje van Bruggen, balances deliberately off-center on a reflecting pool that complements the calming white façade.
“It’s unmistakably a museum. It’s unmistakably about art,” said John Backman, project director of the 59,000-square-foot expansion, and the boldest endeavor the 78-year-old institution has undergone.

From the newly restored parquet floors and LED lights to the Quebec-commissioned cabinets holding the Chinese collection, the new structure is clearly dedicated to the mission of celebrating and advancing culture. It manages to do that without coming across as uptight and pretentious, a message perfectly conveyed by that fun Oldenburg sculpture consummating the shaded entrance plaza.

“I like the fact that people of a certain age don’t know what it is, because it starts a dialogue,” said Alswang, who turns 72 in May. “I think that’s not a bad thing, you know, to start asking: what’s going on?”

Other works simultaneously debuting with the rejuvenated museum include an elaborate mandala piece by Damien Hirst featuring a butterfly motif; a group of 16th-century paintings depicting a Chinese lantern festival in Nanjing; and a hand-poured glass installation by artist Rob Wynne extending along a new three-story stairway. 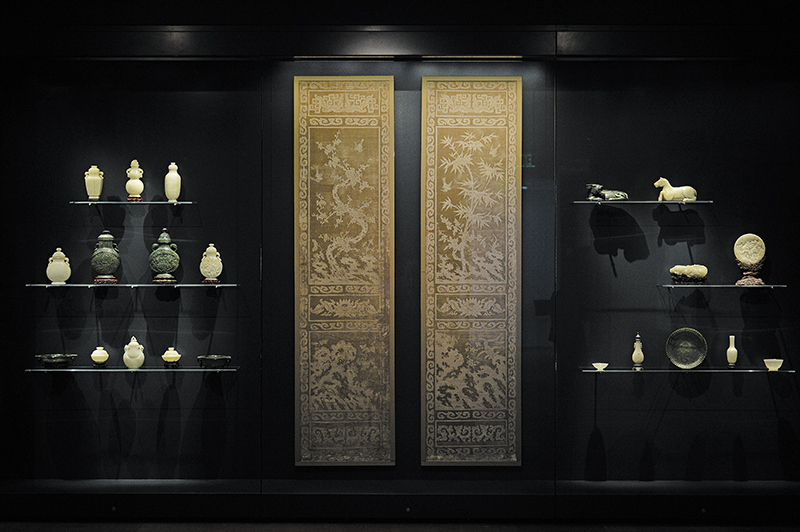 The Norton’s collection of Chinese art is housed in a new gallery with improved lighting.

Radical design
Designed by renowned British architect Lord Norman Foster, the new building is a drastic departure from the original 1941 design and marks a huge point of differentiation from other cultural venues. There is simply nothing like it in Palm Beach County. It stands ultra-modern but avoids the institutional, clinical air that plagues many modern structures by connecting the interior with the exterior at every turn, such as in the new restaurant.

Further softening the structure’s sleek armor and metal roof canopy are views of the sky and subtropical plants, which are visible through elegant glass panels. The use of glass predominates throughout the facility and delivers a particularly striking effect in the Great Hall, from where the robust branches of the old banyan tree can be seen. Opposite from the 28-foot-tall window hangs a new, large-scale tapestry piece commissioned from artist Pae White.

The space, located to the left of the admission counter, has a living-room vibe and treats visitors to comfortable lounge seating, refectory tables and a coffee bar. Fabric wall panels and special acoustic plaster were used for sound-absorbing purposes.
What gives this room that airy, relaxing, light quality? Look up. The 44-foot-high ceiling culminates in a gigantic oculus skylight.

Purposeful impact
The visitor experience was the driving force guiding many tiny decisions, from door handles and handrails to light fixtures and furniture placement. The clarity in the floorplan, which grants visitors a clear east-west line of view, was also deliberate.

Long before the daring expansion broke ground three years ago, the community could sense it would be something special.

For one, the visionary design was by British architecture studio Foster + Partners, whose previous projects include the Museum of Fine Arts in Boston, the Hearst Tower in New York and that translucent Apple store in Kyoto, Japan.

There was no doubt when the vivid renderings of the plan went public. It was audacious, massive and stunning; so much so that gifts from inspired museum trustees and community friends began pouring in.

Last year alone, the museum received a 100-artwork donation from Howard and Judie Ganek and the largest single philanthropic gift in its history: $16 million from Florida native Kenneth C. Griffin. The Norton’s new building is named after him.

Seeing it through completion and leaving it all behind is bittersweet to say the least, Alswang admitted. Under her leadership, the museum added 1,600 new objects to its portfolio. She would like to see it grow more under new director Elliot Bostwick Davis, who starts March 2. That goal should come easier now. A large work by Pae White dominates the Norton’s Great Hall, which has a capacity of 400.

The architects also took on the task of designing the garden spaces in a way that furthers the inside-outside compatibility.
Contemporary sculptures by George Rickey, Keith Haring, and Mark di Suvero, among others, now adorn the “great lawn” that behaves like an outdoor gallery. It replaced the museum’s former paved entrance.

Works by 42 students from 12 schools are already up in the new Chris and Bernard Marden Community Gallery, which also enjoys a more generous and brighter space.

Other new exhibitions kicking off Feb. 9 include Modern Spontaneity: Ralph Norton’s Watercolor Collection and Nina Chanel Abney, as the latest in the RAW (Recognition of Art by Women) series.

Museum officials announced there would be free admission on Fridays and Saturdays, and Art After Dark events will now run through 10 p.m.

Since construction hit the final stages in July, there has been a lot of “touch and go,” said Backman.

With only a few weeks until the big reveal, he reflected on this long journey. “You are managing crisis after crisis. You get fatigued. But then you get these moments that wake you up,” he said while recalling one particular glorious night on the job. The parapet letters with dimmable lighting had just crowned the unrecognizable building with a recognizable name. From across the street, Backman looked back at the illuminated building.

“You don’t always expect the real thing to be so much better,” he said. “It was just a breathtaking experience.”

New at the Norton