Fifty years ago this summer,
the Vietnam War began.
Area veterans remember the trials and triumphs of that era. 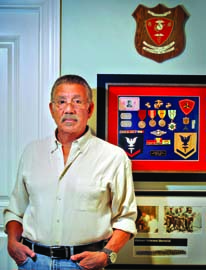 from his days in Special Forces.

When does a war begin? And when does it end?
On Aug. 7, 1964 — 50 years ago next month — the U.S. Congress passed the Gulf of Tonkin resolution, granting President Lyndon Johnson the right to wage war in Vietnam without a formal declaration of war.
By then, 216 Americans had already died there. The first was Richard B. Fitzgibbon Jr., killed on June 8, 1956.
On April 30, 1975, with Saigon falling to the North Vietnamese, U.S. service members and diplomats were evacuated by helicopter.
Two weeks later, on May 15, Kelton Rena Turner, an 18-year-old Marine, was killed when Cambodian communists fired on the SS Mayaguez, a U.S. container ship.
When the Vietnam Memorial in Washington, D.C., was dedicated in 1982, there were 57,939 names on “the wall.” Since then, the names of 347 military personnel who later died of their wounds have been added.
All told, 3,403,000 Americans served in Vietnam, and most of them returned. Some came home with wounds both visible and invisible, but they all brought memories. Al Naar, in August 1968 in the Quang Tri Province of Vietnam. 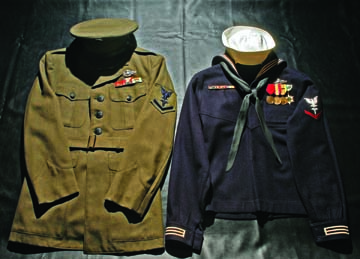 Marine and Navy uniforms that Al Naar wore during the Vietnam War.

Al Naar
Ocean Ridge
For Al Naar of Ocean Ridge, the war in Vietnam began in May 1968, when he arrived in Danang, a Navy medic assigned to the Marines.
He was 21 that year.
“The war had moved north and the Marines weren’t surviving the chopper ride to Phu Bai, so we convoyed to Quang Tri, 8 miles south of the Demilitarized Zone,” he remembers. “It seemed like the incoming choppers with dead and wounded Marines never ended.”
Naar is 67 now, retired from a career in the health care industry. Twice a year he lectures at the U.S. Naval War College in Newport, R.I. Along with his words, he brings a slide show of 150 snapshots he took in the battalion’s five operating rooms. The brightly colored photos include a lot of red.
“The copters brought in the wounded, and they’d radio what they had,” he explains. “Twenty walking, seven critical, five KIAs. Those CH446 SeaKnight copters — you can’t imagine how loud. The back goes down and the stretcher-bearers come rushing out. It was organized chaos. Patients screaming and docs calling orders.”
They tried to save Americans first, then South Vietnamese soldiers, then civilians and, finally, any Vietcong.
“We saved a lot,” he says, with pride. “We lost a lot, but we saved more than we lost.”
As long as the wounded were coming in, he was there. Sometimes his day was two or three days long.
“Sometimes during surgery, they’d start lobbing rockets at us and we’d leave the patient lying on the table and go huddle in a corner, and I’d think, ‘I hope this doesn’t hurt too much.’ But they always missed.”
When there was time to sleep, he slept in a tent, with mosquito netting to keep out, not mosquitoes, but rats.
“Some were big as kittens,” he says. “I was more afraid of getting bitten by a rat than getting shot.”
Naar left Vietnam on May 28, 1969, and flew home to New Jersey for 30 days’ leave.
“I went to a bar in New Brunswick we all used to hang out at and ran into a friend I hadn’t seen. My friend introduced me around — ‘He just got back from Vietnam,’— and one of the other guys there looked at me and said, ‘So what?’ ”
But he has no regrets.
“It’s probably the most important thing I could have done,” he says. “Looking back, we know the war was a mistake, unwinnable, but my part was nothing but saving lives.” 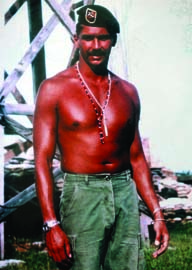 Charles McGill, when he served in Special Forces in Vietnam in 1969. Charles McGill (center) provides first aid to a man in Vietnam in 1969. 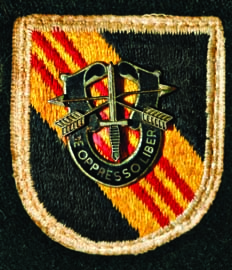 His Special Forces patch reads ‘to free the oppressed.’

Charles McGill
Gulf Stream
“When people ask me if I was a Green Beret, I tell them ‘No, that’s a hat’, ” Charles McGill says. “I was U.S. Army Special Forces.”
At the top of the Gulf Stream home where he’s lived for 37 years, McGill keeps a small, airy room lined with bookshelves and souvenirs,
“Welcome to my ego room,” he says. “My I-Love-Me room.”
The books are largely military history, with the occasional surprise. Essentials of Philosophy. The Poetry of Robert Frost. There’s a mock sign announcing “Green Beret St.” and several photos of a 27-year-old U.S. Army sergeant posing with his buddies, and his M-16 rifle.
“At some point,” McGill says, “we’re the sum of our memories,” and for the next hour or so, this 72-year-old man talks about a boy from DeLand who survived a mild case of polio in 1952 and grew up to spend 1969 leading South Vietnamese mercenaries through mountainous jungles in search of the Viet Cong.
“We went on three- to five-day operations,” he says. “Not missions, that’s what civilians call them. We went in stealth, in jungles, searching for somebody to shoot and someone to shoot at us.”
He enlisted, he says, because he wanted to do something grand, something really big.
“I wanted to test myself, and I thought Special Forces was the hardest thing I could do.”
As he speaks, you realize McGill does not live in the past, but he’s given it a lot of thought.
“Vietnam was a necessary war because there were two ideologies — communism against capitalism — and we didn’t want to fight another land battle in Europe, so we fought it in Vietnam. It was a proxy war.”
He left Vietnam on Dec. 31, 1969, with a Bronze Star and a Legion of Merit from the South Vietnamese government.
In 1975, he spent 18 months in Africa as a private security contractor, then went to work for a computer company before starting his own firm, Creative Communications. In the I-Love-Me room, he is working on a memoir of his year “in country.”
“After the North Vietnamese took over,” he says, “they killed almost everyone who worked for me, and now they’re turning about as capitalistic as we are.”
Did the U.S. lose the war in Vietnam?
“We never lost a land battle,” McGill says, “but we lost the political and public support.”
And was it worth the loss of life?
“If we’d won it, it would have been.” “When you write this,” Scott Symons said, “I hope you’ll emphasize that Vietnam vets aren’t as screwed up as everyone thinks. Three million men served there. How many are living under bridges?”
Symons, 69, was the first in his family to attend college, a student at Rutgers University who came home one day with an application to the Reserve Officers’ Training Corps.
“I said, ‘ROTC, Dad, what’s this mean?’”
“It’s good,” his father told him. “It means you’ll be an officer.”
Symons signed up, graduated Rutgers in 1966 and arrived in Vietnam in August 1967, a lieutenant in the 4th Transport Command, Quartermaster Corps.
“My eyes were bad enough that I was not allowed to be in combat arms,” he said. And so he wound up supervising about 300 South Vietnamese and 25 Americans — warehouse workers and mechanics driving food and ammo, tents, cots, radios, rifles and beer to supply the 9th Infantry Division.
“I went to the bush because my clients were in the bush,” he explained. “I would say — just myself — I was in a situation maybe once a month. If somebody shot at us, we returned fire. But the odds were with you.”
Except when they weren’t.
On Jan. 30, 1968, Symons was enjoying a weekend off at the Bachelor Officers Quarters, a hotel behind the U.S. Embassy in Saigon.
“It was R&R,” he said. “We had a great time Saturday night, and then it was 3 a.m. Sunday morning.”
A team of 19 Viet Cong had blown a hole in the Embassy wall and occupied the grounds, part of a series of surprise attacks known as the Tet Offensive.
“Forty guys in a hotel and only five of us had weapons,” Symons recalled. “Yeah, I was scared. So was everybody else.”
He came home a captain in August 1968, went back to Rutgers to earn a master’s degree in business on the G.I. Bill and did well in pharmaceutical marketing.
When he talks about Vietnam now, Symons is humble about his service, and philosophical about the war.
“There was a difference between officers and enlisted men,” he emphasizes. “The officers had it easier.”
And what did he learn from the experience?
“To speak a little Vietnamese,” he says, then reconsiders. “The biggest lesson I learned is to get up, show up, be there on time, do what you’re supposed to do and things will be OK.
“We got delivered there,” he says, “but once we were there, we did our job.”