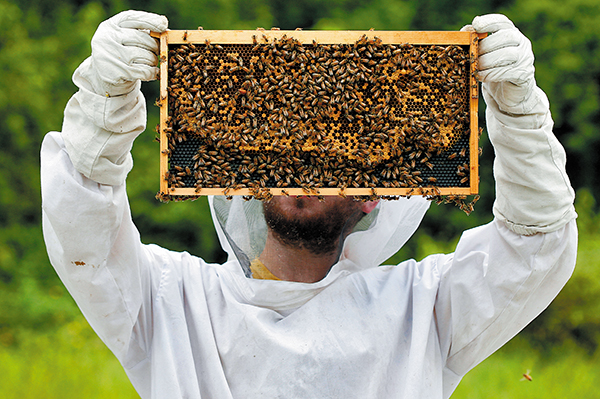 Aaron Budney checks one of the hives he keeps at his mother’s home west of Lake Worth. Photos by Tim Stepien/The Coastal Star

Catnip bores them.They don’t chirp. Wouldn’t fetch a stick to save your life. And they sometimes kill.
Why in the world would anyone want to keep bees?
“No, they’re not really a pet,” concedes Colleen Paul-Hus, who set up her first hive in the living room of the Gulf Stream home she shares with her husband, Rich, and four young children. “But you can learn from them. They give you an insight into nature. And we’re curious people.”
She’s not alone. Last year, Bee Culture magazine estimated that the U.S. has about 120,000 amateur beekeepers, and the number is growing as a result of colony collapse disease. First identified in 2006, CCD is a phenomenon in which worker bees suddenly abandon a hive. Left without the bees that bring nectar and pollen to the queen bee and her babies, the hives die.
Suspected culprits include parasites, insecticides and climate change, but whatever its cause, the damage has devastated the commercial bee industry.
Between April 2014 and April 2015, about 42 percent of domestic honeybee colonies died, according to the U.S. Department of Agriculture — an 8 percent jump from the year before.
“Colony collapse disease has brought an increase in backyard beekeepers because it made news,” says Lee Wisnioski, vice president of the Palm Beach County Beekeepers Association. “People heard nearly half the hives were dying and felt this was something they could do to help.”
Established in 1974, the local group has more than 200 members, Wisnioski said, of whom about 180 are hobbyists with just a few hives in the backyard.
Beekeeping is legal throughout Florida, he added, except that communities governed by homeowners associations may forbid them. However, all hives must be registered, and a modest annual fee paid, based on the number of hives. For backyard beekeepers with fewer than five hives, the fee is only $10.
“I’m fearful of the bees going into decline,” Paul-Hus agreed, “and I felt this would be a safe haven for them and a learning experience for the children.”
Paul-Hus, raised on a farm in Ohio, has made her home on North Ocean Boulevard a testament to the family’s love of flora and fauna. The garden grows tomatoes and potatoes, cucumbers and spinach, oranges, tangerines, parsley, rosemary and thyme. The family has a very large, very friendly silver Lab named Sandy, and once kept Japanese fighting fish until someone put too much food in the tank and the fish succumbed.
“And we had nine or 10 chickens,” she reveals, “but you needed a permit for the coop and we had to get rid of them.”
And so, two years ago, she added a beehive.
In the living room. 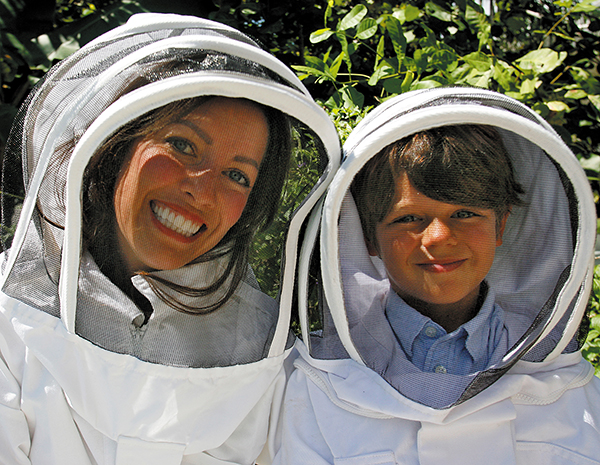 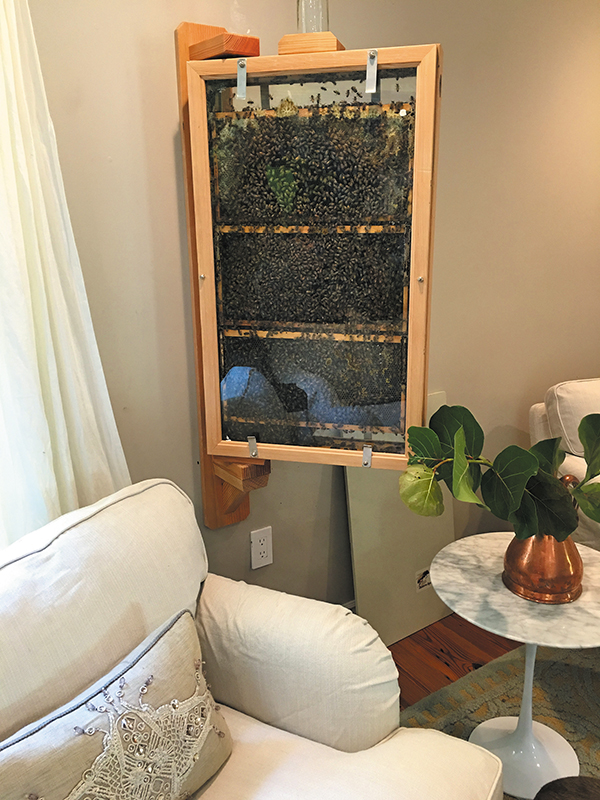 Beekeeper Colleen Paul-Hus and her son Max wear suits and veils for safety while checking the family’s backyard hives in Gulf Stream. Max says he has yet to be stung. They keep an observation hive in the living room of her Gulf Stream house. Bees enter and exit via a small passage leading from the honeycomb to the world outside.

“It’s called an observation hive,” she explains.
Imagine a box about 2.5 by 1.5 feet square and perhaps 3 inches deep, with a glass front. This transparent box, which can hold up to six honeycomb frames, is attached to the wall, with a small passage leading from the honeycomb to the world outside, so worker bees can come and go.
Whereas other families watch TV or a crackling fire, the Paul-Huses can watch their bees make honey, without fear of being stung.
“That observation hive makes a lot of people want to keep bees,” she says.
In June, she added an outside hive capable of holding up to 30 honeycomb frames.
“I’m the only one except my dad who hasn’t been stung,” boasts Max Paul-Hus, 8, who helps his mother tend the hive. “At first I was afraid but now it’s fun.” He dips his finger in a bowl of the very honey he helped harvest. “There’s nothing I don’t like about it.”

Aaron Budney found his first hive in a discarded orange traffic cone on the vacant lot beside Briny Breezes Boulevard.
“I was interested in getting involved with nature,” he says, “and my mother was interested in getting a tax deduction.”
Budney, 21, who lives in the County Pocket, contacted the PBC Beekeepers Association, which provided a mentor to help him extract the hive and start a hobby.
Today he keeps two thriving hives behind his mother’s house in the agricultural area west of Lake Worth, where they qualify for the deduction.
“I’m a novice beekeeper,” he says. “I haven’t had a honey harvest yet, but I’m fascinated by the whole process of caring for and observing them. There’s so much more to it than just the honey.”
On a sweltering Thursday afternoon, Budney donned the beekeeper’s traditional garb — white hood and veil, shirt, pants and gloves — and began inspecting the hives while his mother watched from a distance.
As he worked, Budney grasped a hand-held smoker, a small can filled with burning pine needles. Bees sting when they feel threatened, and the sting releases a pheromone that brings other bees in a swarm. The burning pine keeps other bees from smelling that first release of pheromone and swarming.
“When you’re stung, it’s a sudden, sharp pain, and then it radiates like a hot needle and swells for about an hour,” Budney said. “And then it itches for a couple of days.”
Budney has been stung five or six times, but never attracted a swarm.
On June 21 in Boca Raton, a beloved family dog named Delilah wasn’t so lucky. 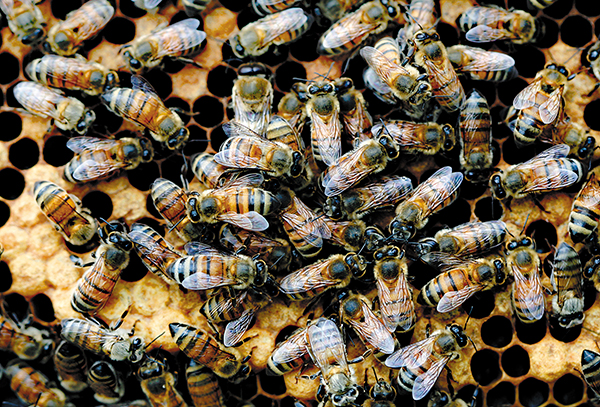 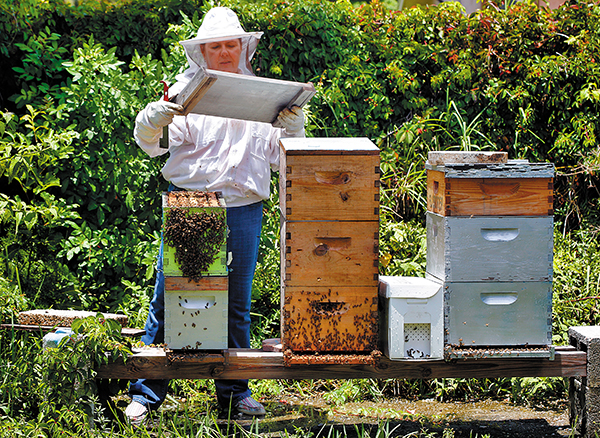 Nancy Palilonis checks on beehives at her home in Delray Beach. Her father and uncle got her involved in beekeeping when she was 7

The 7-year-old rottweiler mix died after being swarmed in the backyard of Debbie Leonard’s home near Mizner Park.
When Delilah took refuge in the garage, Leonard’s teenage children were able to reach her. The family veterinarian removed nearly 60 stingers from her body, but she’d gone into toxic shock and, despite repeated antibiotics, had to be put down.
At first, experts from the state Department of Agriculture speculated that Delilah may have been killed by a colony of feral “Africanized” bees found on a nearby tree. Imported from South America in the 1950s, the subspecies is more aggressive than Florida’s common, Europeanized honeybees.
However, after testing bees from a nearby hive, the experts determined the dog was killed by the more common species.
Apparently a honeycomb had blown away from a hive in a nearby tree and landed in Leonard’s yard. The dog was attacked when she came to investigate.
Bee attacks are rare, but any time a hive is threatened, the bees will become aggressive, no matter the species.
According to the Centers for Disease Control and Prevention, about 90-100 people are killed in this country every year as a result of allergic reactions to the stings of bees, hornets and wasps, making bees the second-most deadly animal in the United States — after human beings. But that’s out of the many thousands stung by bees each year.
“Lightning is a much  greater danger than bees in Florida,” the beekeepers association’s Wisnioski says. “Walking quickly is what we teach. Get inside a car, a house. You do not stand there and swat at them.”

“I didn’t pick this hobby,” Nancy Palilonis says. “The bees picked me.”
When she was growing up in Binghamton, N.Y., in the 1950s, her father and uncle bought some beekeeping equipment for $20.
“We got enough honey to take care of three families,” she remembers. “And when I turned 7 my father said, ‘You’re old enough to help now.’ It was a family process to harvest the honey.”
In 2009, Palilonis bought a home off Lindell Boulevard in Delray Beach and found bees had invaded the garage wall. An extractor from the PBC Beekeepers Association who removed the hive encouraged Palilonis to renew her childhood friendship with bees.
Today, she keeps three hives, three smaller “starter hives” and volunteers as a mentor with the association.
“It’s work,” she says, sweating behind her hood, veil and long-sleeved coat. “But I enjoy the social element, interacting with other beekeepers and introducing people to it.”
Her hives yield about 20 pounds per hive a year, which she harvests through a strainer placed atop a 5-gallon bucket. The honey drips from the frame to the bucket, and she stores the remaining wax in her freezer, to be melted down someday.
“I’ve bought a candle mold,” she says.
She’d like more hives — a few more, anyway — but hesitates to name a number.
“I’d have to think about that,” she says.
It’s not for fear her neighbors might complain.
“I give my neighbors honey,” she says.

The first time Colleen Paul-Hus and her children harvested the hive, they came away with about 3 pounds of honey, which gave them seven Mason jars full and a huge sense of sweet satisfaction.
“It’s like getting your first egg from a chicken,” she says.
And that’s why people want to keep bees.
The stinger stings. But the honey’s sweet.