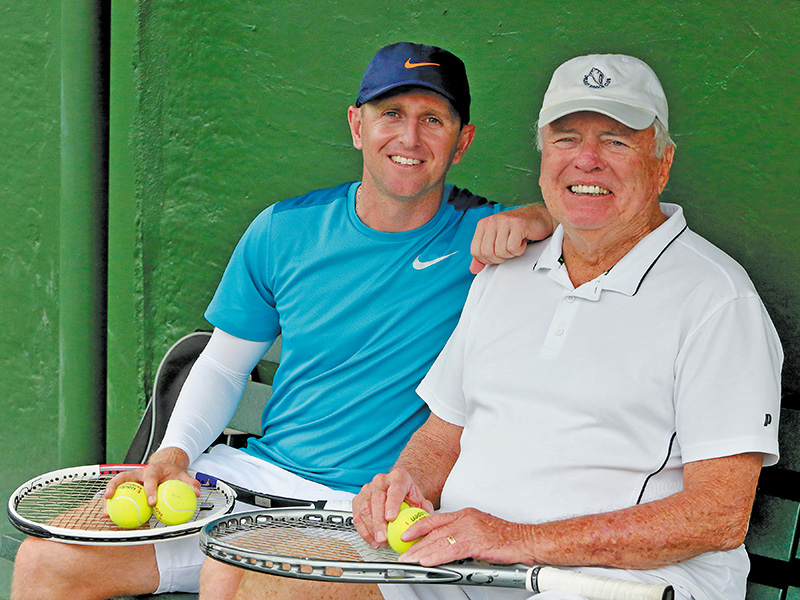 Jesse Levine, a Boca Raton pro who ranked as high as No. 69 in the world, is the new tennis director at the Delray Beach Club, succeeding Chuck Narvin. Tim Stepien/The Coastal Star

Whatever the arithmetic, Narvin informed the club last summer the time had come to step away and the search began for his successor.

A Boca Raton product who as a player climbed to No. 69 in the world, Levine applied for the job and was at Wimbledon coaching Jessica Pegula when he heard from the club’s human resources manager, Kristi Frias.

“Being on the road 25-30 weeks a year is tough, and I’d been doing that since I was 14, 15 years old, living out of a suitcase,” he said. “I wanted to be at home, sleep in my bed, be close to my family and my girlfriend. It was important to get where the travel was minimized.”

Levine arrived in early November and planned to spend about a month working alongside Narvin to make for a smooth transition.

“I have big shoes to fill,” he said. “The members have nothing but good things to say about Chuck. Over the last few weeks I’ve gotten to spend almost every day with Chuck, and that’s been really neat, learning from him and learning about the culture he’s built here.”

A South Florida resident starting in 1973, Narvin spent time at Inverrary in Lauderhill, Woodmont, Gleneagles and the Country Club at St. Andrews before “retiring” and moving to Phoenix in 2004. He wound up at Anthem Country Club working four jobs.

“I was a teacher at Anthem with Walter Hurd, a substitute teacher, a ranger on the golf course and coached the team at Boulder Creek High School,” Narvin said.

The Delray Beach Club lured him back in 2011.

“I’ve been able to use my marketing skills as much as possible to develop a tennis program that took care of everything — social, competitive, and so forth,” he said.

“He came and pulled it all together,” General Manager Shane Peachey said. “He was exactly what we needed at the time. He’s done an amazing job, and Jesse has sort of picked up the racket and is taking it to the next level.”

A native of Ottawa, Canada, Levine moved to Boca with his family at 13 and played five sports at Boca Prep: soccer, golf, tennis, baseball and basketball.

He stopped the other four after realizing his junior year that tennis was his ticket to a college scholarship and wound up playing No. 1 singles at the University of Florida.

“I was there with Tim Tebow and my first day we won a national championship,” he said, referring to UF football.

Levine made All-America before turning pro in 2007.

At 5-foot-9 and 150 pounds, he needed to rely on quickness and fitness to hang with players like Gulf Stream’s Kevin Anderson, who stands 6-8.

The winner of several national tournaments as a youngster, Levine scored his biggest match victory as a pro against former world No. 1 Marat Safin at Wimbledon in 2009. Five years later an elbow injury forced him into retirement.

“I got to walk away on my terms,” he said. “Not a lot of athletes can say that.”

Under contract as a player with Nike, Levine signed on with the sportswear giant as a talent scout while also serving as an analyst for the Canadian broadcaster Sportsnet.

He had become friends with Jeff Cohen, tennis director at Woodfield CC in Boca, and signed on as his assistant running the junior program.

Then came an offer to coach Madison Keys, whom he helped reach No. 7 in the world in 2016.

“Who knows if I’ll ever get a chance to coach a top-10 player again, so I jumped on that, and that led to coaching Jessica Pegula the last 21/2 years,” Levine said.

The daughter of Buffalo Bills and Sabres owners Terry and Kim Pegula, Jessica earned her first WTA title in August, just after she and Levine parted ways.

As much as he enjoyed working with top players, Levine said he gets just as much satisfaction from mentoring club members.

“It’s a lot different but it’s fun because there’s a lot of room for improvement, and they get such joy out of small improvements in their game,” he said.

“With the pros it’s more about focus, and mentality and pattern of play in their game. Here you change something. … I just got off the court with a member and he was so excited that he was starting to hit topspin backhands. That makes you feel good, to know you helped somebody.”

While the Delray Beach Club has only two courts on its fairly limited beachside tract, negotiations are underway to rent more, as has been done in the past.

Acknowledging that a solid foundation for the program is in place, Levine hopes to expand the junior program and bring in a few new ideas, such as cardio tennis.

“It’s about getting your heart rate up while enjoying yourself out there,” he said.

Narvin is confident he’s leaving the program is capable hands.

Levine has “impressed me with his history of playing and teaching,” Narvin said. “The members here are going to really enjoy his working here as tennis director. His personality is fantastic, and he certainly has the tennis skills to be a very good tennis director.”