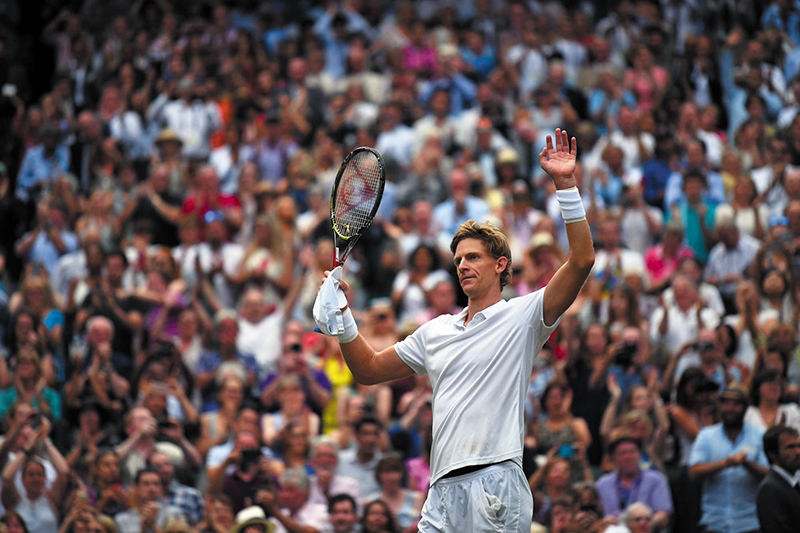 Gulf Stream resident Kevin Anderson acknowledges the crowd after he outlasted John Isner 26-24 in the fifth set of a Wimbledon semifinal that was the second-longest match in tournament history. Anderson went on to his second runner-up finish in the past four Grand Slam events. Thomas Lovelock/AELTC

Kevin Anderson has been on the doorstep of winning two of the past four professional tennis Grand Slam events — the 2017 U.S. Open and the 2018 Wimbledon Championships. But each time the door slammed shut.
Anderson, a 32-year-old resident of Gulf Stream, finished second to Rafael Nadal in New York and to Novak Djokovic last month at Wimbledon.
Back in Gulf Stream with his wife, Kelsey, following his Wimbledon run, Anderson discussed his plans to finally knock down the door.
He beat top seed Roger Federer in a five-set quarterfinal and outlasted John Isner in a historic six-hour, 36-minute semifinal, which ended 26-24 in the fifth set.
“I think my game is definitely there,’’ said Anderson, who planned to return to the court for the summer hard-court season at the Rogers Cup starting Aug. 3 in Toronto. “I’m on the right path and as I keep learning how to handle these big moments, I think I will become more comfortable as well. I am going to keep looking forward — winning one of the Slams is a huge goal of mine.’’ 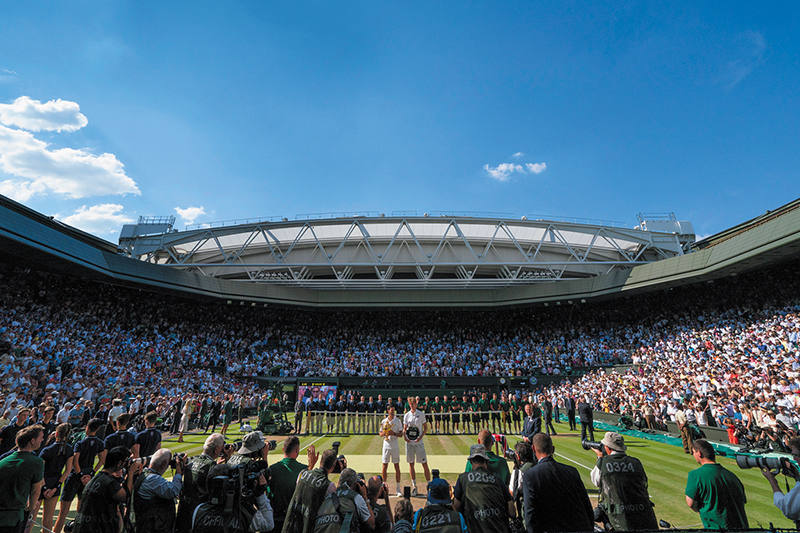 Kevin Anderson (right) holds the plate awarded to the Wimbledon runner-up as he stands with champion Novak Djokovic during the trophy ceremony. The result gave Anderson a career-high No. 5 world ranking as he prepares for the U.S. Open. Joe Toth/AELTC

Anderson’s Wimbledon run moved him to No. 5 in the ATP world rankings — the highest of his 11-year pro career and the highest of any South African-born player since Kevin Curren rose to No. 5 in 1985. Eric Sturgess and Cliff Drysdale were ranked No. 4 during their careers, but that was before the official ATP world rankings.
“Achieving a top-five ranking has been a big milestone for me,” said Anderson, who has dual U.S. and South African citizenship. “It makes me the highest ranked South African man in the open era of tennis, which means a great deal. I have a huge amount of respect and have always looked up to Wayne Ferreira, Johan Kriek and Kevin Curren, who were some of the best players in South African history. I’m honored to be in such great company in terms of my ranking and tennis achievements.’’
Anderson’s defeat of Federer, in which Anderson was down two sets and faced a match point before winning 13-11 in the fifth, set up the semifinal vs. Isner. Each man was near exhaustion before Anderson became the first South African to reach a Wimbledon men’s final in 97 years.
Following the match, the second-longest in Wimbledon history, Anderson, Isner and three-time Wimbledon champion John McEnroe were among those who called for a change in the rules to prevent such long final sets. Isner also played the longest match, a 70-68 victory over Nicolas Mahut in 2010 in 11 hours, five minutes over three days.
Does Anderson believe Wimbledon will seriously consider their remarks?
“I think in some aspects, yes, because it happened in the semifinals as opposed to the first round,’’ Anderson said. “On the other hand, John’s previous marathon match lasted almost twice as long as this one and they didn’t consider a rule change.
“Obviously it’s been spoken about, but at the end of the day there’s a lot of history with playing the long fifth set. On the plus side, my match was something that will definitely go down in the history books.’’
With the U.S. Open set to start Aug. 27, Anderson is primed for more history.
“My results at Wimbledon this year were further confirmation that my game is good enough to compete at the best level,’’ Anderson said. “I’ve had that belief already, but now it has come down to believing and performing against the best players on the biggest stages in the world.’’