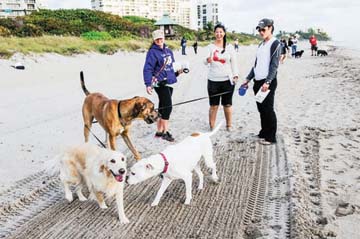 Related: Delray dog owners get no special treatment from Boca

Friday the 13th was a day of firsts for city resident and pet owner Darlene Ward.
It was the first official day she could take Toby, her yellow Lab, onto the city’s new Bark Beach. Ward and her pet were also the first to hit the sand. And Ward was first in line two days earlier to buy the first permit Boca Raton issued.
“He’s been jumping in the waves,” said Ward, who arrived before the beach opened at 7 a.m. “I’m so excited.”
Bob Davidson, one of two park rangers assigned to the 300-yard-wide stretch of dog-friendly sand, confirmed Toby’s celebrity status.
“That’s the inaugural legal dog on the beach,” Davidson said.
The dog beach, at the northern end of Spanish River Park, admits canines from 7 to 9 a.m. and 3 p.m. to sunset on Fridays, Saturdays and Sundays. Dog owners need an annual permit ($30 for residents of the city or the Greater Boca Raton Beach and Park District and $165 for nonresidents).
A three-day pass is $10 and can be purchased at the Spanish River Park gatehouse.
Bark Beach welcomed a dozen or so dogs in its first hour. Dominee Banks, who lives in Boca Raton and works in Delray Beach, brought her 2-year-old Great Dane, Tikea, whose size unsettled some.
“He says I’ll love you to death,” Banks said.
“I’m just so excited you have no idea,” said Laurie Spear, who brought Luna and Caffie, her Portuguese water dogs.
Spear lived for a while in the Bahamas, which allows pets on its beaches, unlike most of South Florida. Fort Lauderdale and Jupiter were the only cities with dog-friendly sand until Boca Raton joined them. 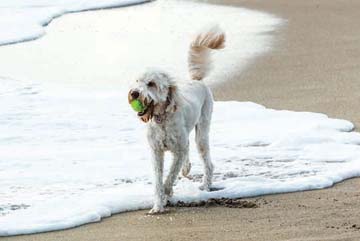 Quincy, an Australian Labradoodle, plays with a tennis ball.

The first joint exposure to sand and surf left Susan Aronberg and her labradoodle, Quincy, wanting more. “I just wish they were open during the week as well,” she said.
The city wants it clear that “Bark Beach is a pilot program.” Permit applications have that statement printed across the top, Recreation Services Director Mickey Gomez said.
Permits are available at the community centers in Patch Reef and Sugar Sand parks. The city sold 346 resident permits and seven nonresident permits as of Dec. 30, making it more popular in its first month than Fort Lauderdale’s Canine Beach. Fort Lauderdale sells 250 permits a year (and charges nonresidents $45 a year).
Assistant City Manager Mike Woika said Bark Beach attendance averaged 20 dogs in the mornings and 35 dogs in the evenings for the first three weekends. A dog bit a 7-year-old boy on the beach Dec. 28. He was treated and is OK, Woika said.
“So far staff has reported only one instance of dog waste left on the beach,” Woika said.