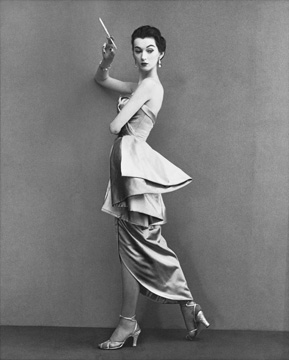 The arts season for 2009-10 is in the books, but that doesn’t mean we’re all going to be reduced to flipping on the A/C and watching videos of cats playing piano apps on an iPad (cute as that is).

Longtime observers of the cultural scene hereabouts know that things are far less seasonal than they used to be, and that there actually is a summer arts season to look forward to. Among the warm-months big events this year are the Palm Beach Chamber Music Festival, Macbeth at the Palm Beach Shakespeare Festival, Florida Stage debuting at its new home in the Rinker Playhouse, and a visit from Sting at the Cruzan in early July.

Meanwhile, May is a good month to catch up on some shows that are still running as well as chasing down something new. Here are some events worth checking out in the merry month:

Burn the Floor: Competitive dance shows have become addictive reality fare on television, with celebrities and wannabes alike trying their luck at sambas, waltzes and ballroom pizzazz for fun, profit and even pain. Burn the Floor, a high-energy evening of dance featuring 11 couples — including husband-and-wife team Ryan and Ashleigh Di Lello of Fox’s So You Think You Can Dance — comes to the Kravis for nine shows starting May 4. This show, which packed them in for seven months at Broadway’s Longacre Theatre and includes West Palm Beach as one of the first three stops on its initial world tour, is half Latin dance, half ballroom tradition, and was choreographed in nonstop, intensely theatrical style by Australian Jason Gilkison. May 4 through May 9; call 832-7469 for tickets.

Avedon and Elvis: Master photographer and portraitist Richard Avedon (1923-2004), whose work helped create the supermodel and define what American style was, and is, all about is the subject of a retrospective at the Norton Museum of Art that features 175 fashion photos taken from 1944-2000 for the major magazines for whom he worked. Avedon was particularly celebrated for establishing a fresher commercial view of what the modern woman was all about, and in these pictures we can see that sense of beauty and confidence that is so much a part of our culture today. Through May 9 (call 832-5196 for tickets).

Elsewhere, the Boca Raton Museum of Art features a series of photos by Alfred Wertheimer of Elvis Presley at age 21, just at the time when he was becoming a household word. Through June 13 (call 392-2500 for tickets).

Three Tall Women: The American playwright Edward Albee restored his career with this 1994 Pulitzer Prize-winning drama that examines the life stages of an elderly woman, now in her 90s, who has become estranged from her gay son. Palm Beach Dramaworks has tapped Beth Dixon, Angie Radosh, Geneva Rae and Chris Marks as its cast for the show, which will be directed by J. Barry Lewis. Through June 13 (call 514-4042 for tickets).

Chamber music: This year’s chamber music series at the Duncan Theatre’s Stage West featured young solo artists, and one of them, violinist Mikhail Simonyan, had to bow out because of illness. As a substitute, pianist Hyojin Ahn, who accompanied violinist Yuki Numata earlier this year, will appear in a solo recital May 5, in a program of music by Liszt and Ravel (call 868-3309 for tickets). Meanwhile, the Music at St. Paul’s series in Delray Beach continues May 16 with clarinetist Paul Green, violist Michael Klotz and pianist Jennifer Snyder in music by Bruch and Schumann (call 278-6003 for tickets). That same afternoon, Ukrainian pianist Sofiya Uryvayeva comes to the Piano Lovers series at Boca’s Steinway Gallery for a concert of music by Tchaikovsky and Chopin (call 929-6633 for tickets).

Greg Stepanich is founder/editor of the Palm Beach ArtsPaper available online at www.palmbeachartspaper.com. Watch for his column all summer leading up to our Season Preview distributed in October. He can be reached at: gstepanich@pbartspaper.com.