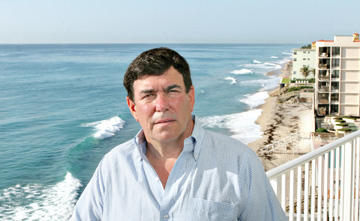 A week later, Harvey Kertzman is second-guessing himself.

“It’ll be with me forever,” said Kertzman, 61, one of two men who pulled a drowning middle-aged Georgia couple from the surf behind the Mayfair House in South Palm Beach. Despite the men’s efforts to administer CPR, the couple died in the May 15 incident.

Not even efforts by Palm Beach County Fire-Rescue paramedics could revive the couple. Denis Agelatos, 70, and his wife, Barbara, 57, were pronounced dead at JFK Medical Center in Atlantis. From Albany, Ga., they were visiting relatives.

The Agelatos were among the few on the beach that Saturday morning. A stiff east wind, strong surf and a hidden rip current kept most out of the water. Except Barbara Agelatos.

Kertzman saw her several times from the eighth-floor kitchen window in his father’s condominium. He owns a trucking company and a gasoline station in Quincy, Mass. He has been staying with his 90-year-old father since his mother died recently.

“It’s not a swimming day,” he said he thought as he ate breakfast. “Then I saw her with a second person, a man. They looked like they were having fun.”

He went on: “I saw her doing a side stroke with her head under water. That didn’t look right.”

Quickly her companion is holding her in his arms outstretched. Kertzman guesses they are 65 feet off shore, in six to eight feet of water, just beyond the submerged, rocky remnants of old A1A, long reclaimed by the Atlantic Ocean.

By the time Kertzman reached the beach, another man was already in the water. Both bodies were limp. Kertzman took Agelatos. The other man, identified only as David from Boynton Beach, tried to pull the woman ashore.

“It’s very hard to pull a lifeless person out of the water,” Kertzman said. David joined him and they pulled Agelatos onto the beach, then his wife.

They did chest compressions on the bodies until a Lantana lifeguard arrived from the public beach about a quarter-mile south. Then paramedics arrived with a vacuum pump and a portable defibrillator. Nothing helped.

“In my heart of hearts, I thought she was going to come back to life,” he said. “It’s really hard. I’ve always been successful. If you want something to happen, I was the guy to make it happen. This time I failed. This time I couldn’t make it happen.”

Kertzman later met with the three adult sons of the Agelatos.

He proposed that columns be driven into the beach behind each condominium with foot-high numbers street address numbers affixed to each.

And rip out old A1A from beneath the sea, he said. It’s a large drop-off into deep water beyond the road.