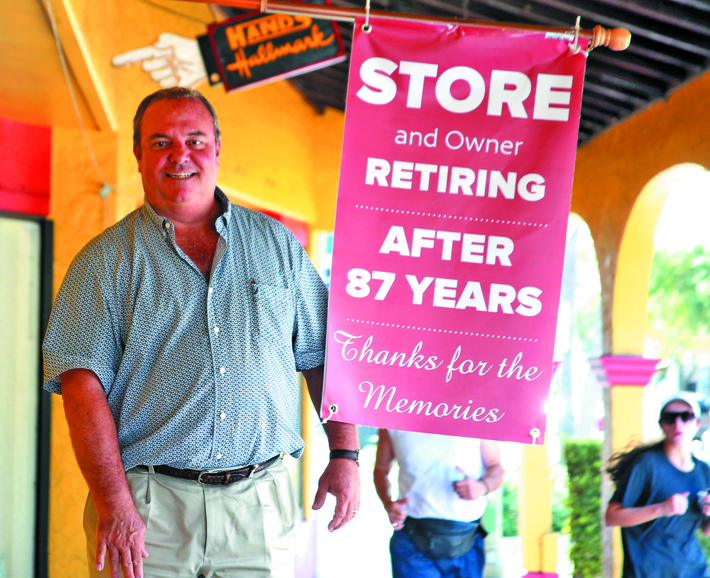 David Cook, owner of Hand’s in downtown Delray Beach, plans to close the store and retire in June. Cook, 58, sold the property after his family had owned the business since 1964. It first opened in 1934 as a bookstore. Tim Stepien/The Coastal Star

Owner recalls how business changed with times and became a landmark

The colorful plastic hand-shaped chairs no longer grace the sidewalk in front of the Delray Beach office supply shop known as Hand’s. Owner David Cook took the last one home several weeks ago, a memento of a business that has called 325 E. Atlantic Ave. its home for 87 years and has been under his family’s reign since 1964.

By Father’s Day, Hand’s, one of downtown Delray’s oldest businesses, will close. The only remaining business on the avenue older than Hand’s is the Colony Hotel, which dates back to 1926.

Cook sold hundreds of those kitschy plastic hand chairs over the years until UPS stopped shipping them.

“They used to be delivered with a label on the finger, often on the second finger,” Cook said with a laugh. “Kids loved them. There were more pictures taken in those chairs than you can imagine. Not everybody put together that Hand’s was the name of the store.”

The amiable retailer, whose father, Lonnie Cook Jr., ran the business before him, admits revenues dipped about 30% during 2020, but he isn’t calling the store closing a coronavirus casualty.

“It’s more just the right time in everybody’s life that’s involved,” said Cook, 58. His wife, Renee, has been working in the store’s accounting department for the past 10 years and his two grown daughters already have good jobs they enjoy, he said. 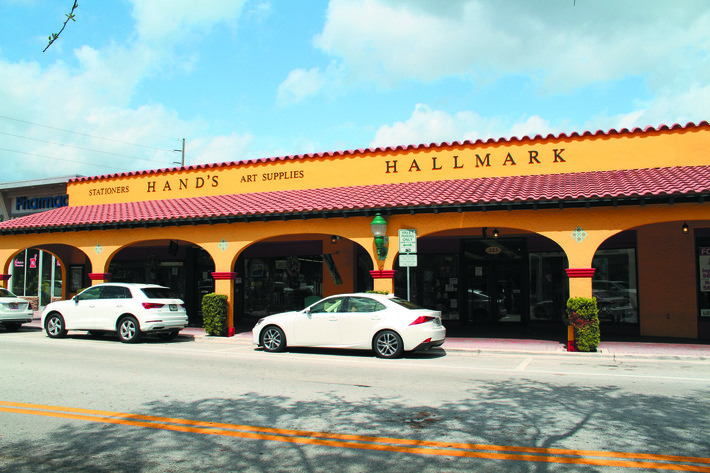 How it all began

The store’s history begins with Lauren Hand, editor of the now defunct Delray Beach News. He founded the Delray Book Shop in 1934. Locals called it Hand’s, and since the name stuck, the shop officially changed its name to Hand’s Office Supply.

Hand saw a need for a local office supply store, since he previously had to travel to West Palm Beach to buy his supplies for the newspaper.

In 1964, Hand sold the business to Lonnie Cook Jr., whose father was a longtime friend and Delray Beach’s first paid fire chief.

Lonnie Jr. died in 2012 and his son, David, then assumed ownership, although he had been assisting his dad in managing the store for several years before. David and his sister, Connie, were regulars at Hand’s even as children.

“I remember coming in the store with my dad when I was about 4,” Cook said. “We were always dragged along.

“We’d play in the store and build little forts out of boxes. We’d just be hanging around doing our thing, pretending we were helping, but obviously we weren’t.”

David became a full-time employee at Hand’s when he was 26 and distinguished himself as a savvy businessman.

But it wasn’t easy. In the early years of the Cook family’s ownership, Hand’s was the place to go for office supplies.

Bill Bathurst, a former city commissioner who worked at Hand’s during high school and junior college, said, “Hand’s was Office Depot before there was an Office Depot.”

Bathurst and other employees drove vans that had 6-foot pencils on top. “We’d deliver everything from a pad of paper to a 900-pound fireproof safe,” Bathurst recalled. “The cool part of the job for me was I knew the back door to every office from Boynton to Boca. You just knew everybody and everybody knew you. You’d pop in and pop out. It was almost like a pizza delivery guy. We’d make 30-40 deliveries a day. That’s the way everybody got their office supplies.” Hand’s vans with the pencils on top were ubiquitous.

By the late 1980s, the real Office Depot came to Delray and had its headquarters in Boca Raton.

“We lost about half of our customers,” Cook said. “Of course, their stuff was cheap. That was a game changer. That’s when we diversified way more into gifts.”

It wasn’t just office supply stores. Chain bookstores including Books-a-Million and Barnes & Noble moved into the community in the 1990s. That hurt Hand’s business, as well.
Hand’s always sold books, but fewer of them after that. Customers could always find specialty books in the store as well as books by local authors like artist Winston Aarons.
Aarons’ novel Jasmine — about love, sex, obsession and perfume — found a prominent place on the bookshelves at Hand’s, for which the artist and author remains grateful.

Aarons has been buying art supplies at Hand’s for decades and is sad to see it go.

“I’m going to miss that place,” he said. “It was the last vestige of a real hometown. It was just great because I live close by and could get there in a quick drive and parking was easy in the back of the store.

“And the owner, David, what a lovely man! I’m going to miss him and all of them and the place. I’ll have to go all the way to Deerfield to get my paint supplies now — or Amazon.”

Bathurst said the real memories for him were working with the people. “It was the office supply store of the time but it was more like a homey drugstore. Nobody would go through Delray without taking a walk through Hand’s. You’d always see somebody you knew. It was not exactly Cheers bar, but had that kind of feel.”

When the city tackled what it called “the Renaissance of Delray” in the 1990s during “the Decade of Excellence,” Atlantic Avenue was torn up in the process, Cook said.

“But that’s really when Delray kind of turned around. That’s when the restaurants started putting seating outside and bands performed on the corner and we’d close the street and have our entertainment at night and everybody would come back downtown.”

What Cook objected to — and fought against for a decade — was the addition of parking meters in 2017.

“We had experts come in from all around the country,” Cook said. “The city followed absolutely zero of all the experts’ advice.”

“It alienated the locals,” said Cook, who was on the city board for the parking master plan. “I just never saw some people again. If they came in, they were mad. They’d complain. It absolutely hurt me. I would say it took 25% off my business.”

On a brighter note, Cook says he will never forget the Beanie Baby boom of the 1990s.

“People were in line wrapped around the building waiting to buy them,” Cook said. “We already had an account with Ty, so when they got hot, we were ready to go.”
In a single day, Hand’s once sold $60,000 worth of the stuffed toys. In March 2020, when nonessential businesses were closed in an effort to stop the spread of the coronavirus, Hand’s found ways to stay in business, selling office supplies and janitorial products.

“It was a different kind of market,” Cook said. “I had paper towels, gloves, soaps and hand sanitizer and I sold a lot of toilet paper. The masks weren’t the thing at first, but we had them when they were.”

It was a good year for board games and jigsaw puzzles.

“We would put every puzzle we had in the window with a number and a sign out there to call, email or something and tell us what puzzle you wanted,” Cook said.

“We weren’t letting people in. We’d get their credit card through a little door, ring them up and give them their product. Same with art supplies. You would just email a list and we would prepare the order and they would drive up and honk and we would bring it out to their car.”

No matter what obstacle came his way, Cook found a way forward.

“To run a business for that long and have it be successful, is not easy,” Bathurst said of his friend and former employer. “So many places go out of business. And to pivot and pivot and pivot into things that would be sellable but keeping the core heart of the store alive, is something.”

The inventory grew over the years to be more than books and office and art supplies. It included a Hallmark store, casino-caliber playing cards for the serious bridge players, toys, board games, souvenirs and collectibles like Blackwing pencils.

He plans to give the structure a complete remodel with new plumbing, wiring and roof. Cohen plans to divide the building — including space formerly home to Vince Canning Shoes, which shuttered last summer after 68 years — into five retail spaces.

As for David Cook, he promises not to be a stranger.

His souvenir hand-shaped chair is blue, but Cook isn’t. A self-described people person, he says he will miss the interaction with customers and staff, but said it is the right time to close this chapter of his life.

“We always had our niche. We survived a lot and really the reason we’re selling is, it’s time to retire. … And Delray’s still very popular.”