Variegated crotons and multi-colored bromeliads are grouped along the Chicago brick paths leading to the front door. 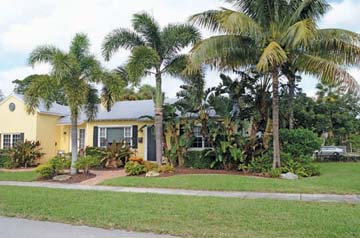 A variety of palms and white birds of paradise rise above the home in Boynton Beach.

Chicago-brick paths wind around this sunny yellow bungalow that has more nicely tended plants in the front yard than grass.

Red Thai plants frame the black front door of this 1940s shingle home with its green gable. White birds of paradise towering 15 feet in the air offer plenty of privacy to anyone inside the front rooms.

Green and yellow trinetta; yellow, green and pink bromeliads; ixora with bulbous yellow blooms; and plenty of xanadu and foxtail ferns carry the color scheme of the house into the front yard.

Coconut and foxtail palms add shade. And a bougainvillea surrounded by white marble stones provides a pop of color.

In 2009, Colleen and Travis Klabon moved into this house at 405 SW First Ave. in the Forest Park neighborhood of Boynton Beach.

“It’s an up-and-coming area,” says Colleen, although she bemoans the fact that many of the nearby houses are rentals that could use a little upkeep.

The previous owners renovated this house and landscaped the yard in 2005. The Klabons, who are both teachers, had always lived in apartments so weren’t used to gardening.

“But when we moved here, we knew we had to maintain the landscaping. And we embraced it,” says Colleen.

For their efforts, the couple recently was named the November House of the Month by the Boynton Beach Garden Club. They are the first house to win this designation.

The new award is an effort to “encourage people to think about their properties and how they can beautify their neighborhoods and their city,” says Toni Manuel, who is a member of the newly created awards committee.

The committee is looking for homes with curb appeal. “This house just seemed to fit the bill,” says Manuel, adding that the committee also is looking for owner involvement. “We don’t want to see something maintained by a landscaper. We’re not looking for whack and hack yard care,” she says.
Although the couple does hire yard help, you might find Travis out front with his weed whacker or Colleen trimming the crinum lilies.

On other occasions, she might be sitting out front on the brick patio sipping a cup of coffee or doing Bible study. “It’s one of my favorite spots,” she says.

The house is built on a corner lot that measures about 120 by 70 feet. The backyard is nothing but a narrow strip of land. The side yard, which also is visible from the street, is shaded by a gumbo limbo tree.

But most of the land is in front, where the brick-lined flower beds are covered with a fresh layer of mulch. And carefully trimmed bushes come just to the white trim under the picture window.

The winning homeowner receives a sign to display out front for a month. It reads: “Congratulations! Thanks for beautifying our world.”

“Having that award sign in our yard really encourages us to make sure everything looks nice,” says Colleen. “I almost wish everybody could have one.”