Quarterback Tom Brady isn’t the only New Englander who moved to Florida in 2020. The latest expats are 20 sea turtles from Cape Cod, Massachusetts.
Seventeen Kemp’s ridley turtles and three loggerheads were flown from the Bay State to Boca Raton Airport on Dec. 13 after volunteers found them and many others stranded and cold-stunned on beaches there. They then were transported to Gumbo Limbo Nature Center for treatment.
Turtles Fly Too, a nonprofit that provides air transportation when endangered or threatened species are injured, provided the free flight.
The New England Aquarium, working with the National Oceanic and Atmospheric Administration, arranged for the chilly 20 and others to be transported to Gumbo Limbo and to other rehab facilities around the country. 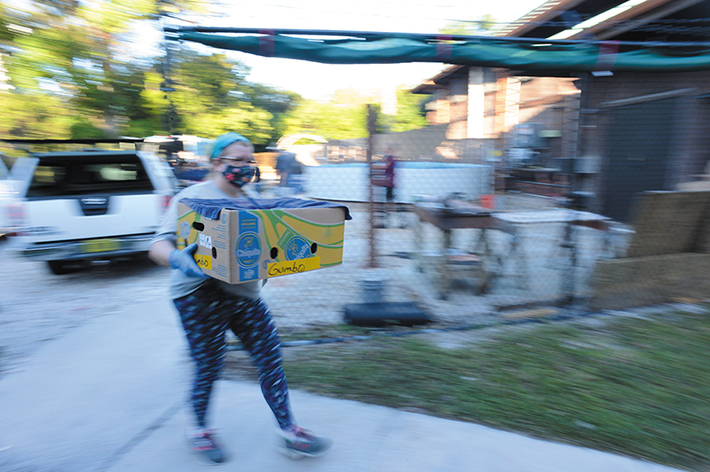 Kristin Child, environmental program coordinator at Gumbo Limbo, rushes one of the stunned Kemp’s ridley turtles to an exam room at the rehab center. The Kemp’s ridleys, the smallest sea turtles, flew to Boca Raton in banana crates.

“The cold stun makes them very lethargic. Some of them are almost catatonic,” said Leanne Welch, Gumbo Limbo’s manager. “Many of them … when they take a breath, they’re weak and lethargic and they can’t lift their heads all the way out of the water. They do end up … breathing in sea water. That usually results in pneumonia.
“We treat them just like you would treat your kid, with a nebulizer,” Welch said. “We’re continuing to give them fluids and antibiotics.”
They also were weighed, had blood drawn and X-rays taken. They were kept in dry bins until a staff veterinarian determined it was safe for them to be placed in water at Gumbo Limbo’s tanks. 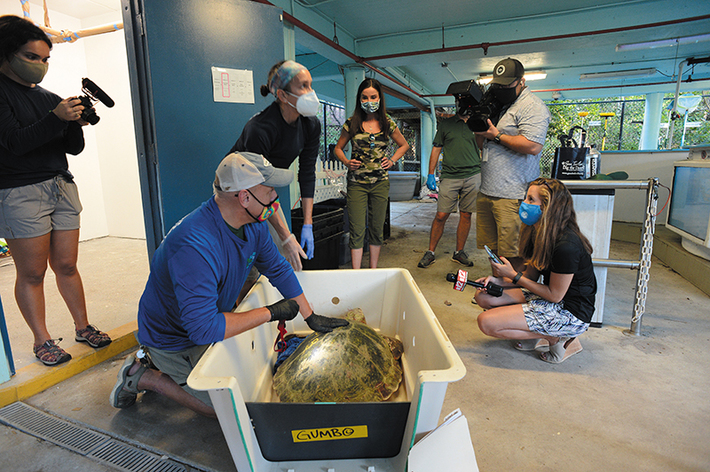 Three of the cold-stunned sea turtles from Cape Cod getting treatment at Gumbo Limbo Nature Center are loggerheads. The turtles’ arrival drew local TV coverage. The Massachusetts rehab sites ran out of room and sent them. Photos by Jerry Lower/The Coastal Star

Eight days after arriving, all 20 turtles were alive and swimming in tanks, although still sick. “Some are eating. Some are not,” Welch said.
Many of the tanks had dividers placed in them, creating four-plexes for smaller groupings, Welch said. That makes it easier to keep tabs on individuals. Not that the turtles object. “Sea turtles aren’t very social,” Welch said.
In addition to the Cape Cod refugees, turtles that already were undergoing treatment are in tanks.
“It’s definitely tight,” Welch said. “Very few of our turtles have their own room.” 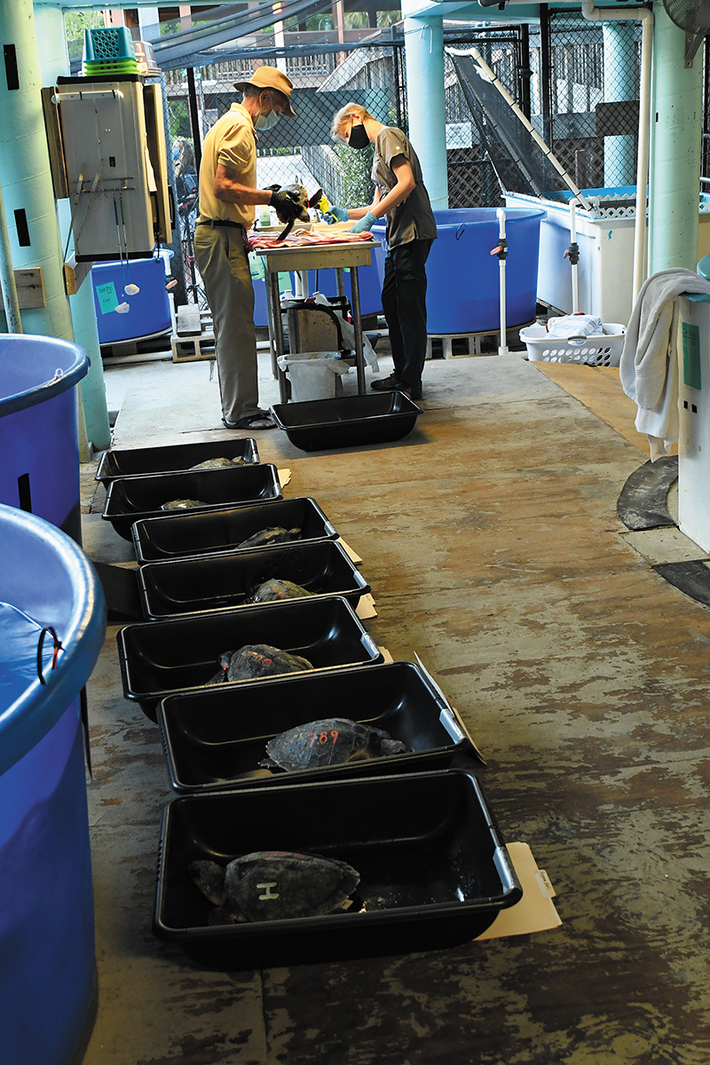 Kemp’s ridley turtles, each with its own tub and medical file, await their turn to be examined by Kirt Rusenko and Emily Mirowski in the rehab facility at Gumbo Limbo. The turtles are likely to stay for at least a few more weeks.

Kemp’s ridleys are the smallest and rarest of the seven sea turtle species. All seven are endangered or threatened. At 85 to 100 pounds, Kemp’s ridley adults are practically pipsqueaks. By contrast, the largest species — leatherbacks — can weigh up to 2,000 pounds. That’s more than some automobiles, or the combined weight of the Miami Dolphins’ offensive line.
Many of the turtles that checked into Gumbo Limbo are juveniles. “The biggest one was a loggerhead at 120 pounds. I’d say most of them are in the 10- to 20-pound range,” Welch said.
Kemp’s ridley turtles are seen in Florida, but seldom nest here. Most prefer a particular beach on Mexico’s Gulf Coast. They are seasonal visitors to the North.
“They spend their summers up there because loggerheads and Kemp’s ridleys love to eat crustaceans,” Welch said. “If you’ve been to New England, you know there are a lot of crabs and lobsters in the water.
“When the water starts cooling off, they turn around and head south. But … Cape Cod sticks out in the middle of the ocean.”
The curved hook shape of the cape forces turtles to swim north before they can go south. Some don’t figure that out. “So they end up stranded in Cape Cod Bay,” Welch said.
It’s not always geography that stymies the turtles. Some get blown back to shore by strong winds. Others start to head north, find the water is colder and turn back, said Connie Merigo, director of the sea turtle rescue and rehabilitation department at the New England Aquarium.
Sea turtles depend on external heat sources to maintain their body temperature. When they’re exposed to colder temperatures for a sustained period, their heart rate and circulation may drop.
Cold stunning can also cause shock, frostbite and death. Well-organized and trained volunteers on Cape Cod brave frigid conditions to check beaches for distressed turtles, day and night.
Sea turtles on Cape Cod are stranded each year from late October through December or early January. “Sometimes they’re so cold you can’t detect if they’re alive or dead,” Merigo said of the initial encounters. More than 80% of those brought to the aquarium survive — this season the success rate is better than 90%, she added.
When the New England Aquarium and a second turtle rehab site on Cape Cod get overwhelmed, they send some of their cold-stunned patients to other qualified facilities around the country, such as Gumbo Limbo. The aquarium sent out only a little more than 100 turtles last year to rehab partners, Merigo said.
This year it’s been around 500, she said, and will probably end up being the busiest season ever by the time it ends.
Gumbo Limbo has treated cold-stunned sea turtles in the past. In 2014, 11 Kemp’s ridley turtles were transported there from Cape Cod after a sudden drop in water temperature.
The nature center had a larger crisis originating closer to home in January 2010, when an unusually bitter winter left thousands of mostly juvenile green sea turtles stunned in North Florida bays and estuaries. By month’s end, 177 turtles had been admitted to Gumbo Limbo. Most were released within days after warming up, but the last patient was there for about five months.
Gumbo Limbo’s veterinarian will determine when the current patients are strong enough to return to the ocean.
“It could be anywhere from a few weeks to upwards of six months,” Welch said. Exactly where is up to the Florida Fish and Wildlife Conservation Commission.
Wherever it is, the New England visitors won’t be racking up frequent flier miles. “Most, if not all, will be released in Florida,” Welch said.