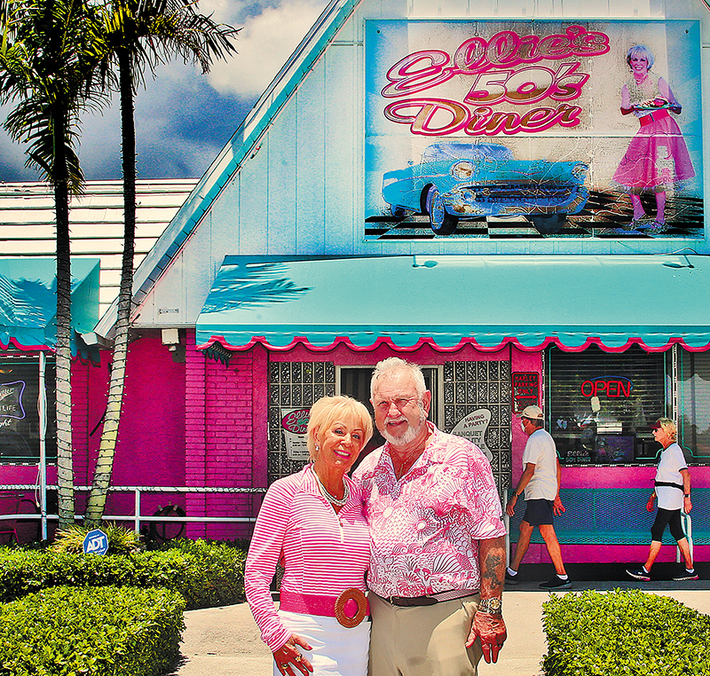 Ellie and Bob Smela, who opened Ellie’s ’50s Diner in 1990, are retiring. The restaurant will close July 10. That’s Ellie depicted on the sign, sporting a poodle skirt. Photos by Tim Stepien/The Coastal Star

Bobby Darin is jiving out Mack the Knife on the jukebox this afternoon at Ellie’s ’50s Diner. But soon, it’ll be The Spaniels, with their classic closing song, Goodnite, Sweetheart, Goodnite.

That will signal the end for the retro diner in Delray Beach owned by Ellie and Bob Smela, who agree, “Well, it’s time to go.”

The iconic building with the neon and ’57 Chevy on its sign at 2410 N. Federal Highway has been sold. Ellie’s will close for good July 10.

The Smelas sat in the diner, telling their story. Ellie was dressed like a sock hopper: a pink poodle skirt, scarf around her neck, pearl bracelets. Her nails and lipstick were bubblegum pink. You could expect a song from Grease was about to play.

But they were chronicling the end of this fantasy theme — the stark contrast between today and the 1950s.

A combination of skyrocketing food costs, broken supply chains, an unpredictable labor force and a 364-day-a-year job has the couple looking forward to retiring.

They’ll be doing some “road trips” and winding down at their second place, a family farm homestead, in Cedarburg, Wisconsin, Bob said.

Bob Smela says Ellie’s ’50s Diner has been busier than normal for this time of year since he and Ellie announced it would close July 10. The diner is at 2410 N. Federal Highway in Delray Beach. Call 561-276-1570 or visit www.elliescatering.com for more information.

They started out in the food business opening Ellie’s Deli, a sandwich shop, on what was then Delray’s Northeast Eighth Street (now George Bush Boulevard) in 1982. From that, they also ran three food trucks that serviced the area’s warehouses, construction sites and spots like the flea market and car dealerships.

The Smelas opened the diner in 1990 after Bob told Ellie, “We’re not making enough money.”

He said, “I had to find a building for us to expand.”

They found the property that originally housed a Dairy Queen and then the Bahama Smokehouse.

“People told me I was crazy buying here. It was a bad part of town at that time,” he said.

Ellie said their neighbors were “a pawn shop, a dirty bookstore and something else across the street, a sub shop or something.”

The main drag was populated with “prostitutes walking up and down the street, among other questionable people,” Bob said.

They persevered, and reconstructed the building for a small diner, about 80 seats. Eventually they added a back room with 40 more seats, and later, an event center where weddings and lively New Year’s Eve parties took place.

Ellie designed and Bob built out the restaurant, gathering nostalgic pieces for decor, and hiring servers with personalities.

One who’s worked here for decades, Donna Giordano, plays the role of crabby server. “People love her, they ask for her,” Ellie said. “When someone says it’s their birthday, she’ll say, ‘Oh, bummer!’”

It’s all part of the fun atmosphere, a throwback to the ’50s diners along the East Coast, Bob said. Those eateries coincided with the birth of rock ’n’ roll, teens coming of age, and cars that were showy works of art. They also served the average worker solid, if plain, comfort food at reasonable prices. This Marilyn Monroe likeness ($1,300) and other artwork at the diner were sold.

There’s a kitsch factor that “makes everyone smile,” Ellie said. Elvis, Marilyn and Sinatra are life-size cutouts set around the rooms and pasted on restroom doors. Bettie Page, James Dean, Charlie Chaplin and John Wayne, too.

No matter if some diners are more in tune with Green Day than Blue Suede Shoes, everyone seems to enjoy it, she said.

Pink and aqua neon strips frame the ceiling. The front counter is a Formica pattern called Boomerang, a design found in 1950s kitchens everywhere, and the swivel stools of chrome and leatherette.

A “Lost in the ’50s” sign hangs over the service window and a Coca-Cola red and white clock keeps time above the milkshake machine. High school graduation portraits of guys with outgrown crew cuts in skinny ties line the front wall.

All of it is now for sale.

Live entertainment they introduced proved to be a draw. Elvis impersonators were popular on Valentine’s Day, and the Beatles tribute band from Orlando, which appeared more than once, played to sold-out crowds.

“We have a Neil Diamond impersonator — Neil Zirconia — who performs with his wife. He’s very popular, too,” Ellie said.

The vintage car shows held monthly in the parking lot drew hundreds of enthusiasts as well. One last, huge car show was held in mid-June — with another record-setting crowd. 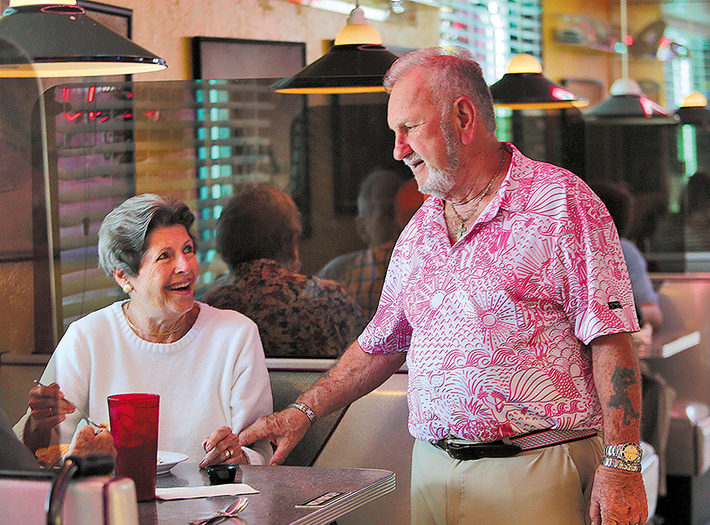 Bob Smela says hello to Libby Vollmer, who with her husband, Jack, are longtime customers and huge fans of Ellie’s ’50s Diner.

The Smelas got to know most of their regulars by name.

“Remember Ed? He came in for breakfast for 25 years or more,” Bob said. “He sat in booth No. 5 and brought his crossword puzzle. He was 98, and still sharp.”
Ed’s daughter told them about his death last month. “When we don’t see our regulars for a while we wonder what happened,” Ellie said.

The Smelas’ family-like friendliness is what attracted Libby and Jack Vollmer. They’ve been coming to Ellie’s for decades, mostly for breakfast or lunch on Sundays.
“It’s such a great atmosphere,” Libby said. “It’s so bright and cheerful. We love the waitresses. They seem like they really enjoy their job and are like family. Bob and Ellie treat them very well.” Ingrid Paoletti, since the beginning, and Heather Gordon, for three months, have been part of the diner’s staff.

The Vollmers, now in Boynton Beach, came to Delray Beach in 1965, and lament the closing as yet another iconic Delray spot gone. “Few older businesses are still here. The Patio, Ernie’s Tap Room, Hand’s, Wenzel’s — all the names are gone. And now Ellie’s. We’re sad about it,” Libby said. “They were part of a tradition. We don’t know where we’ll go now.”

Bob Smela is worried that a lot of his diners won’t have a place to get the quality food Ellie’s served, such as the restaurant’s most popular dish, turkey dinner.

“We cooked whole turkeys on the bone and made mashed potatoes from scratch. We have a machine in the back that peels 25 pounds at a time in three minutes, and another one to mix them,” he said.

The prime rib nights were noteworthy as well. “We cook them in the Alto-Shaam,” he said, referring to a specific roasting oven. “It comes out perfect.”

Other foods such as fried bologna and liverwurst were items not found on most menus and came from Boar’s Head, he said.

“They had liver and onions, too,” Libby Vollmer said. “All their food was great.”

Ellie’s own Elvis cake, a pineapple-walnut cake with cream-cheese icing, was a shop favorite. “She makes two or three a week and they sell out,” Bob said.

“That reminds me, I need to call George and tell him I’m making one,” she said. George is another regular who always buys two slices — one to eat and one to go. “He loves it.”

The people, new and old, were the best part of the diner, the Smelas said, and the part they’ll miss most about it all.

“You have to like people to be in this business,” Bob said. It gave him joy, he said, to serve quality food and see people return for it.

They’ve found a bigger audience since the closing was announced.

“We’ve been busier than any other time pre-COVID for this time of year. Once people heard we were closing, they rushed in,” Bob said. “Maybe we shouldn’t have closed.”
He looked at Ellie and she shook her head.

Would you do it again? he was asked.

Both shook their heads at once. “It’s too hard,” Ellie said.

He pointed to rents on Atlantic Avenue. “They’re insane.” The only way to make money is to own the land under you, he said, and even that’s iffy today. He’s glad to be selling with the real estate market on the upswing.

He’s unsure whether the new owners, whom he declined to identify, will keep the property a restaurant, but says it’s possible, since they’ve asked for the kitchen equipment to stay.

He wishes them well but shakes his head.

“I’m going to be a consultant to others who want to open a restaurant. I will try to talk them out of it.”