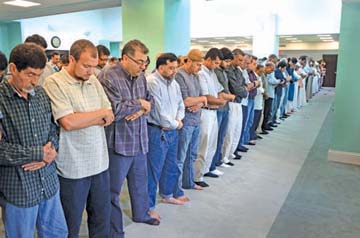 Muslims have joined Christians and Jews to support Family Promise, the interfaith effort to provide emergency shelter for homeless families with children.
“We want neighbors to know that Muslims are ones you can count on to be there for them,” said Mohamed Abushadi, a spokesman for the Islamic Center of Boca Raton.
The Islamic Center joins 13 Christian churches and four Jewish synagogues to give volunteer and financial support for South County homeless families.
The move is evidence that Muslims are blending into the spiritual fabric of their community.
“The universal message of humanity and brotherhood defines us,” Abushadi said. “As Muslims, we find it essential to explain the true nature of Islam, which means submission to God.
“Submission to God implies compassion to all humankind,” he said.
The Muslim congregation began here with students at Florida Atlantic University holding their Friday prayer services in a classroom in the art department.
The congregation got noticed eight years ago when it bought a school east of FAU that has become the Garden of Sahaba Academy, a school for 190 students from kindergarten through ninth grade.
“That was a big milestone for us,” Abushadi said. “An actual structure of our own gave a strong message that this was a legitimate center where our outreach began.”
Hundreds of Muslims worshiped in the school’s main hall, overflowing outdoors because the space was too small.
The solution was a new $2 million mosque that opened next to the school last August.
The 30,000-square-foot mosque has room for 500 men to pray in its main hall. Women pray in smaller rooms on the second floor.
Muslims have faced hostility and prejudice when they opened mosques in other American cities. But the Muslims here invited their neighbors to dinner and their opening went peacefully.
Now Christians and Jews have embraced the Islamic Center as the newest member of Family Promise, one of the South County’s most ambitious interfaith charities.
Twelve host congregations now take turns to provide shelter for homeless families in their churches and synagogues. The Muslim congregation joins five others that just provide volunteers and financial support.
“We haven’t reached the level of participation where we want to be yet,” Abushadi   said. “We’re testing the waters to see how much we can do to
help.”