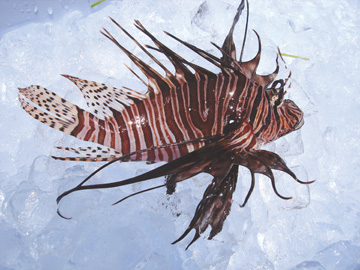 
The pest from the Pacific Ocean called a lion fish could soon be called dinner.


“I really don’t know what it tastes like — I’ve never eaten them — but yes, they’re edible. Plenty of people have. It’s actually part of the management strategy used in the (Caribbean) islands,” he said.


The lion fish, one of a number of fishes in the Scorpaenidae family, is now a concern on reefs off Palm Beach County. A nonnative species introduced largely by saltwater aquarium owners, the fish has no natural predators here, Hardin said. Environment watchers are afraid the fish may take over natural habitats and decimate reef fish populations if left to multiply,
so fisheries staff members are training others — divers and anglers — to catch
and destroy any lion fish they find.


Compounding the problem is that the fish is venomous — its long spines give those who touch it a sharp sting, similar to that of a severe jellyfish sting, Hardin said. “In most cases, it’s not fatally venomous. You don’t want to get stung by them, or spined as it were.”


Anglers and divers, groups that the FFWCC are working with to catch the fish, must be taught how to handle them safely; this may deter their being sold as a food fish in seafood departments anytime soon.


Beachgoers have little to worry about however, Hardin said. “They’re saltwater animals. We know they’ve gotten to near-shore waters — they can hang around bridge pilings and rubble around them — but typically they’re on the offshore reefs.”


Nobody has a clue as to the current population, but the growing number is troubling. “We’ve got something that can eat a lot of stuff. They’re indiscriminate about eating reef fishes,” Hardin said. “They reproduce after two years, then can reproduce many times a year, constantly pulsing out eggs in their unique reproduction method.”


There’s hope they may become dinner for other reef fish, though. “A couple have turned up in some Goliath groupers, and a lot of folks think those fish will eat them,” he said.


Hardin finds this new intruder an educational challenge. “All our other exotic predators have been on land or [in] freshwater. This is really the first marine animal we’ve dealt with, and we have yet to talk to a lion fish expert. They don’t have any natural enemies on this side of the world, so not that much is known about them. We’ll be learning as we go.”