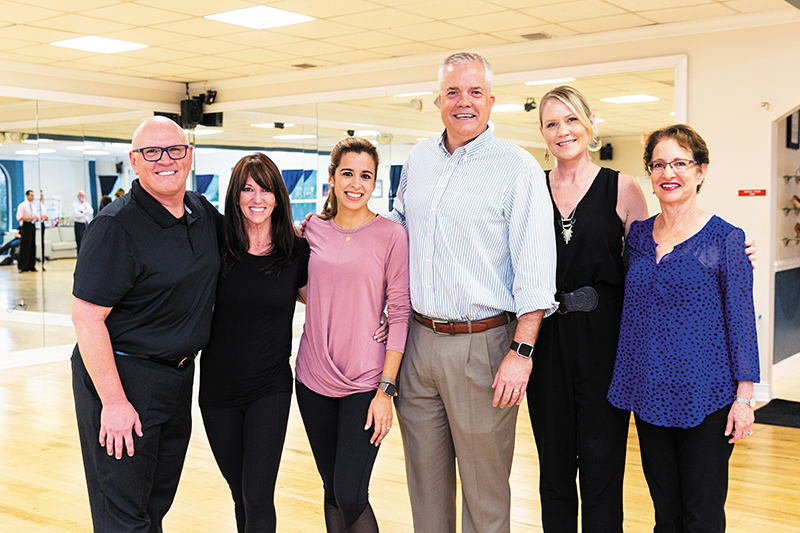 Paired with professional dancers from the Fred Astaire studios in Boca Raton, the participants will get a series of lessons to perfect their routines and then compete for the Mirror Ball trophy Sept. 20 at the Boca Raton Resort & Club.

“This is the do-not-miss event of the summer, as eight of our community’s most-recognizable personalities take to the dance floor for a good cause,” said Tim Snow, president of the nonprofit that helps send students to college.

For information about buying tickets or donating on behalf of one of the dancers, visit www.ballroombattle.com.

The organization will receive $40,000 a year for two years from the Jim Moran Foundation and $34,000 from the Saul and Theresa Esman Foundation. Both are in addition to a $10,000 grant from Capital One.

“The majority of our students are studying to improve their reading comprehension and math to score well on exams and college-entrance tests,” Francis said. “We have a tremendous success rate among first-generation college students, many of whom join high school and middle school classrooms coming from other countries and not knowing how to speak English.”

In other news, PROPEL is partnering with Florida Atlantic University’s Charles E. Schmidt College of Medicine to offer reality-based training to the next generation of physicians.

“This Service Learning Project benefits our kids by giving them access to other young people who are working just as hard as they are, if not harder, to make their goals a reality,” Francis said.

Meals on Wheels of the Palm Beaches has received a $24,000 grant from Impact the Palm Beaches. The money will be used to purchase new kitchen equipment for the nonprofit, which serves freshly prepared nutritious noontime meals to more than 200 homebound seniors five days a week.

“We are honored to have been named a finalist by Impact the Palm Beaches and to have our program recognized for the important work we do in the community,” said Pamela Calzadilla, president and CEO. “The Impact the Palm Beaches grant is especially important to our organization because we receive no government funding and depend largely on the generosity of our community.”

CareerSource Palm Beach County has awarded an additional $100,000 in funding to The Lord’s Place to increase services to help homeless people. The funding complements $200,000 the agency awarded to the nonprofit earlier this year.

CareerSource Palm Beach County has provided a total of $2 million in funding to The Lord’s Place in the past decade to disrupt the cycle of homelessness and unemployment.

“The Lord’s Place has an outstanding track record of providing intensive services to CareerSource homeless participants, and we look forward to working with them to expand these efforts,” said Steve Craig, president and CEO. “These services include benefits navigation, peer support, individual therapy, literacy tutoring, financial coaching, referrals to stabilized housing and health-care coordination.”

“We are grateful for this increased level of support from CareerSource,” The Lord’s Place CEO Diana Stanley said. “The services it will help us provide are life-changing to those we serve. Through the expanded training and counseling this grant funds, individuals who were once homeless or incarcerated will have increased access to meaningful and sustained employment, which is key to long-term stability in their lives.”

They arrived in wheelchairs, on walkers, gripping canes, led by service dogs and holding onto the arm of a loved one or a caregiver for support. About 6,000 guests celebrating the 11th anniversary of the Boating & Beach Bash for People with Disabilities on March 10 found their way to Spanish River Park in Boca Raton for a day like no other.

The bash brings together children, teens, adults, seniors and military veterans with disabilities for an event billed as the biggest of its kind in the country.

“For the thousands who participated in the 2019 bash and for the hundreds of volunteers there to help them, it was one of the most memorable days of their lives,” Van Vechten said.

To donate to or volunteer for next year’s event, visit www.boatingbeachbash.com.

Checks can also be made out to and sent to the event’s parent organization, the American Disabilities Foundation, P.O. Box 99, Boca Raton, FL 33429.