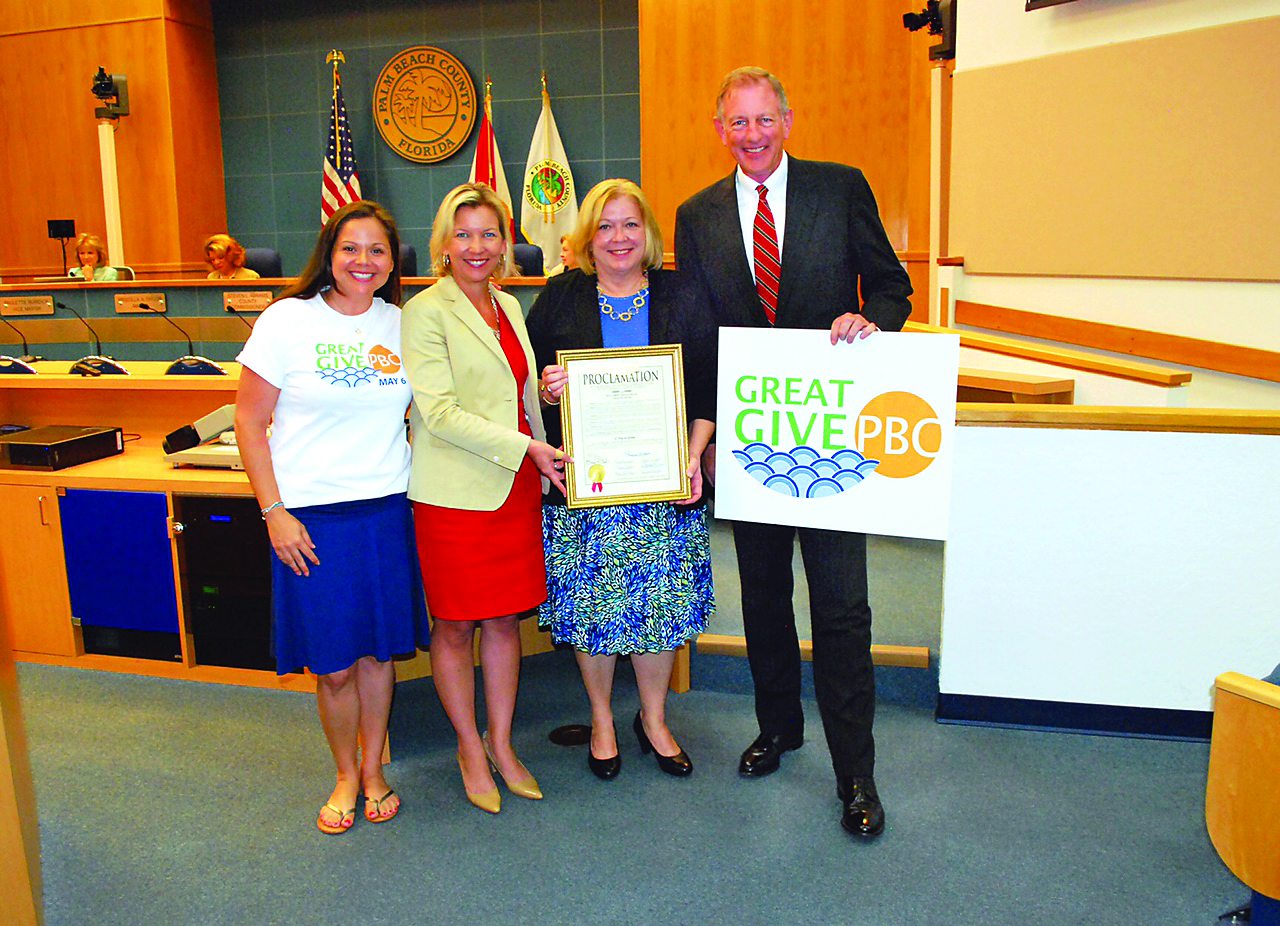 More than 400 nonprofits in Palm Beach and Martin counties will join forces during this year’s Great Give fundraising campaign with the goal of generating $3 million in private donations for their causes.
The campaign runs for a 24-hour period May 5 to 6 and enables anyone to become a philanthropist.
“You don’t need to have a million dollars to make a difference in the community,” said Jennifer Sullivan, director of marketing and communications for the Community Foundation for Palm Beach and Martin Counties, which is organizing the event with the United Way. “All you need is $10 and a passion.”
Great Give kicks off at 5 p.m. and concludes at 5 p.m. the following day. Between those times, residents are invited to visit greatgiveflorida.org and learn about the 437 participating charities. The charities are listed alphabetically, by county, with links to their individual Web and social-media sites. Donors who prefer to give by phone can call 844-448-3329.
“It’s important to give to these nonprofits because they are working hard for us every day to help make our community a better place,” Sullivan said. “When you give during the Great Give, you’re giving with many other people, so your donation makes a bigger impact.”
A bonus pool totaling $500,000 also will be doled out to the nonprofits based on how much each raises in comparison with total proceeds. In addition, a prize patrol will award nonprofits with cash, in-kind services and other goodies every hour.
The Community Foundation will monitor the campaign in a Giving Lounge set up in its West Palm Beach offices, dubbed the “war room.”
“The team kind of basically stays up for 24 hours,” Sullivan said. “We’ll be able to sleep for a few hours, I think. But you see that ticker racking up all those donations, and you just can’t sleep.”
Great Give debuted last year to commemorate the 100th anniversary of the first community foundation established in America — The Cleveland Foundation in Ohio. The inaugural Palm Beach and Martin counties event raised $2.2 million for 330 organizations. This year, the stakes are higher.
“Over half of our nonprofits participating are new this year, so we feel that means the buzz has really started,” Sullivan said. “The vibe is definitely different. People are more excited.”
Sponsors for this year’s Great Give include Valley National Bank; Publix; WPEC-TV; The Palm Beach Post; Comcast; Palm Beach Broadcasting; Florida Weekly; The Stuart News; Green Advertising; Florida Power & Light Co.; Tracey Benson Photography; LexisNexis; TouchSuite; Hart-Lines; Evelyn & Arthur; Whole Foods Market; and Tito’s Handmade Vodka.
Sponsors of the bonus pool include John D. and Catherine T. MacArthur Fund of the Community Foundation for Palm Beach and Martin Counties; John S. and James L. Knight Foundation; Fortin Foundation of Florida; Quantum Foundation; Palm Healthcare Foundation; Lawrence A. Sanders Foundation; Anonymous Family Foundation; and Martin County Community Foundation. Ú


To submit your event, contact Amy Woods at flamywoods@bellsouth.net.