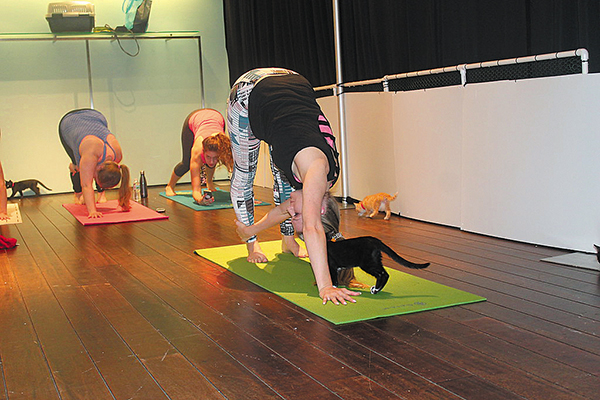 A kitty watches a two-legged friend during Cora Ciaffone’s kitten yoga class. The cats are available for adoption. Photo provided

Now here’s a first: performing a downward-facing dog pose in a yoga class with a kitten. Ah, namaste and please stay, kitty.
Yoga has been practiced for more than 5,000 years. For centuries, the focus has been providing healthy stretches and poses for people. Typically, students quietly shuttle into an enclosed room, unroll their yoga mats, remove their shoes and do their best for the next hour or so to focus on mindful breathing, purposeful stretches and being in the present moment.
In recent years, yoga has expanded to include dogs and even goats in some classes across the country. Now, the hottest trend is to pair up with flexible felines that produce acrobatic moves and comical antics. These classes unleash a surprising twist: All of these adorable kittens are up for adoption.
“This is by far the funniest class I’ve ever taught and each time, the antics of the kittens bring smiles to everyone,” says Cora Ciaffone, a certified yoga teacher and certified dog trainer who has teamed up with the Peggy Adams Animal Rescue League to conduct kitten yoga classes at its satellite location inside CityPlace in West Palm Beach. She also conducts yoga classes that welcome people and their well-mannered dogs throughout the county.
During the kitten classes, a curious feline has crawled into a T-shirt of a student concentrating on a bridge pose. And Ciaffone often spots a person who will briefly stop a pose to pick up and cuddle a kitten who wanders onto his mat or a student stop to toss a toy mouse across the room for a kitten to pursue. Some ever-curious and eager-to-explore kittens have been known to crawl up the backs and perch on the shoulders of students during poses.
Conventional yoga it is not, but the benefits are many.
For the kittens, it is the chance to be adopted. Take the case of Shadow, a shy, beautiful kitten who won over student Jeannine Salus.
“She’s so docile and she kind of hid in the back, which is where I would go in class,” says Salus. “This cat is very close to my soul.”
Rich Anderson, executive director and CEO of the Peggy Adams league, is grateful that CityPlace developer Related Cos. reached out to his animal shelter with the idea of staging kitten yoga places within the complex. The satellite center showcases shelter dogs and cats, leading to 47 being adopted.
“Since day one, it has been a huge success,” says Anderson. “Once everyone is set up with their mats, we release the kittens. We are very driven to bring awareness to homeless pets. With goat yoga becoming popular, we decided why not kitten yoga?”
Dogs and cats are natural yogis. They are limber and live in the moment. They move and stretch with purpose and grace. They can teach us a lot in terms of fending off stress and easing muscular aches, says Ciaffone.
“Our dogs and cats are definitely our health advocates,” she says. “There is no doubt in my mind that they heal. They show us how to be present, give unconditional love and compassion.”
Ciaffone credits her two cats, Luna Stardust and Jackson Galaxy, a pair of shelter rescues, with helping her heal from a divorce and heart surgery.
“I am so convinced that they have helped heal me emotionally, physically and spiritually,” she says. “I now feel so happy and so healthy.”
Whether you plan to take a yoga class with a kitten or dog or simply spend one-on-one time with your pet inside your home, Ciaffone encourages you to study and mimic the movements they make.
“Instead of jumping out of bed when the alarm rings, be like a dog or a cat and take a few moments to do a full body stretch,” suggests Ciaffone. “Lie on your back and gently rotate your head one way and your body the other way. Then sit up and live in the moment. Take a deep breath in and let it out slowly.”
In her dog/people yoga classes, Ciaffone uses lavender oil, which acts as a natural calmer for the two- and four-legged students. She conducts dog yoga classes inside and outside, weather permitting.
So when it comes to being natural yoga instructors, which species is better, cats or dogs?
“I would have to say dogs simply because when I put their people in the last pose of class — a pose of stillness called savasana ­— their dogs often lie down next to them and be calm or even fall asleep,” says Ciaffone. “The kittens will roam around and even walk on people. After all, they are young, active kittens.”
Ah, namaste and good stay, kitty and doggy.

Learn more
If you would like to try kitten yoga, the Peggy Adams Animal Rescue League will offer classes on March 17 and March 31 at its pop-up shop at CityPlace, 700 S. Rosemary Ave., No. 141, West Palm Beach. For more information and to sign up, visit www.peggyadams.org or email KittenYoga@peggyadams.org.
To learn more about yoga and dog training classes offered by Cora Ciaffone, visit www.bodymindsoul.net and www.dogslove2train.com.