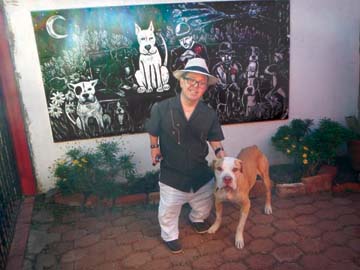 at the South Florida Fairgrounds.

Shorty Rossi, with his signature fedora and thick cigar, will headline the Amazing Pet Expo at the South Florida Fairgrounds in West Palm Beach on March 15. The star of Animal Planet’s Pit Boss will be accompanied as always by Hercules, his 9-year-old pit bull, who has probably logged more miles by air and limousine than most people.

Yes, Hercules is a pit bull, perhaps the dog breed among the 150 or so recognized by the American Kennel Club that generates either unabashed love or downright fear in people. Pits and other bully breeds have garnered headlines for dog fighting rings and attacks on children. But they serve as stellar therapy and service dogs for people in need of physical, mental and emotional support as well as war dogs in combat. A century ago, they were referred to as nanny dogs for their gentleness and devotion to children and babies.

Rossi, a former teen gang member from Los Angeles who served a decade in a federal prison after being convicted of several felonies, credits pit bulls for turning his life around and enabling him to become a successful talent agent, television celebrity and owner of a thriving cigar business. And as a little person standing 4 feet tall, Rossi can relate to this misunderstood breed.

“Pit bulls and bully breeds are very much misunderstood,” he declared during my recent in-person interview with him at his rented casa in Mexico that he shares with seven bully breed dogs. “Because of the media hype, some people judge them for what they hear and not for what they really are. I can relate to that because little people get misunderstood or not taken seriously. We are not circus freaks. Little people are doctors, lawyers and business owners. Being a little person and being an ex-convict, I’ve been misjudged, too. So this bond I have, it’s like, I can relate to them. I know how they feel.”

So where do pit bulls stand in Palm Beach County? It depends on where you live and your homeowner insurance carrier. Pit bulls top the list of banned breeds for some homeowner association developments as national insurance carriers.

Little wonder why pit bulls and bully breed mixes represent a high percentage of dogs seeking adoption at the Peggy Adams Animal Rescue League in West Palm Beach and shelters across the country. Two advocates of bully breeds working to separate fact from fable about these dogs at Peggy Adams are Huck Nawaz, staff behaviorist, and Michelle Christmann, marketing coordinator.

“The majority of pit bulls today make great house dogs and are very personable and gentle with people and children,” says Nawaz. “The most important thing to do when adopting a pit bull or any other dog is to properly socialize them and train them. At Peggy Adams, we offer a wide array of classes in basic obedience, socialization and more.”

To improve the adoptability of pit bulls, shelter officials display “fact or fiction” posters next to their cages to educate prospective adopters. Christmann shared a few examples, so let’s test your knowledge of pit bulls.

All pit bulls are mean and violent. Answer: false. According to the American Temperament Test Society, pit bulls achieve passing scores of 82 percent or higher.

One of the recent pit bulls adopted from Peggy Adams also was named Hercules.

“He came in as a stray and was fearful and under socialized,” notes Nawaz. “We worked with him to improve his confidence and to teach him coping skills. Happily, he showed great improvement and was recently adopted by a young, active couple who are bringing him for our training classes. Hercules is adjusting very well and has found a great home.”

It doesn’t matter whether the dog is a pit bull or a pug or anything in between. The key to a happy, well-adjusted dog centers on positive reinforcement training, healthy nutrition, daily exercise that provides both mental and physical stimulation and feeling that it is safe and loved.

For more on the Amazing Pet Expo on March 15, visit www.southfloridapetexpo.com.