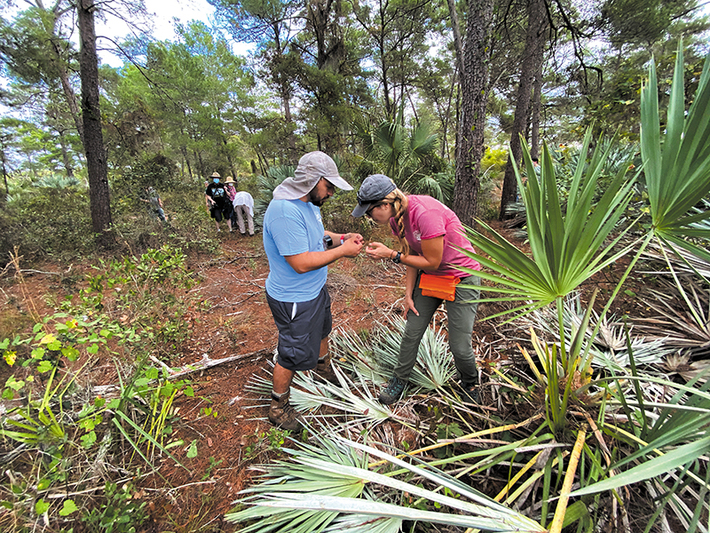 Environmental analysts Antonio Rodriguez and Victoria Strange look at an insect in the midst of a saw palmetto, one of the dominant scrub area plants.  Photos by Joe Capozzi/The Coastal Star

For nature lovers, Palm Beach County’s best-kept secret might be a 36-acre oasis of wilderness surrounded by an industrial park, police station, public health facility, ballfields and residential homes on the north end of Lantana.
The Lantana Scrub Natural Area, tucked inside a densely populated area between Interstate 95 and U.S. 1, would seem like an easy place to reach. But getting there is part of the adventure.
The newest of the county’s 34 natural areas, the Lantana Scrub has no parking lot. Eight parking spaces will be designated later this year at the Palm Beach County Public Health Department parking lot off Southwinds Drive, which borders the Lantana Scrub’s southwest boundary.
For now, visitors can access a half-mile hiking trail and maintenance roads by entering two public maze gates, at the northeast and southeast corners of the property. There is no designated parking at those entrances, either. And the maze gates, open to the public from sunrise to sunset, are tucked away from the road.
The gates are fairly easy to find if you have a little patience and determination. At both entrances, noise emanates from trucks coming and going from a Waste Management Recycling Center on Hillbrath Drive.
Once you are on the interior paths, all signs of the busy urban surroundings give way to the peace and solitude of towering scrub pine trees, lush silver and green saw palmettos and tweeting songbirds. 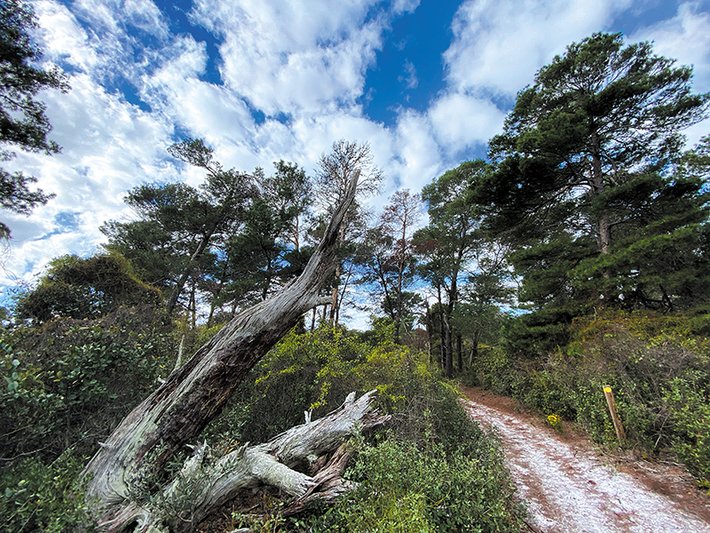 Fallen trees, like this one near a path, are left to naturally decompose in county-managed natural areas like Lantana Scrub.

Formerly part of the now closed A.G. Holley State Hospital property, the Lantana natural area is named for its Florida scrub and scrubby flatwoods, home to Florida rosemary, powder-puff lichen and hog plum.
Wildlife includes gopher tortoises, Eastern Phoebe songbirds, red-bellied woodpeckers, golden-winged skimmer dragonflies and raptors like osprey, Cooper’s hawk and swallow-tailed kite.
The only reminders of civilization are the faint buzzing of airplanes taking off from the nearby Lantana airport.
“It’s a great start. I want to see more of this,’’ Abbe Gleicher of Boynton Beach said on a recent Lantana Scrub tour guided by analysts with the county’s Environmental Resources Management Department.
“Every area needs nature. Nature decreases anxiety and increases a sense of well-being and health,’’ she said.
The Lantana Scrub is owned by the state, which has leased it to the county since 2012 for an annual $300 fee. Before the county started preparing it as a natural area, the site historically had been used as a homeless encampment.
The maze gates, with information kiosks, were added in 2018. Hiking trails were cut in 2020. The county is waiting on additional signage before designating the eight parking spaces at the health department later this year.
“This is a really cool site. It’s very intact considering how much development surrounds it,’’ said Victoria Strange, an ERM analyst.
Abundant flowering tillandsia, dancing lady orchids and air plants can be found in the open scrub of the eastern half, just west of the Lantana Sports Complex.
The dancing lady orchids were introduced to the site by Pine Jog Environmental Education Center.
“There’s a lot of wildlife that uses this little fragment, too, because there’s nothing else in the area until you get to Hypoluxo,” the scrub area about 2 miles south, Strange said.
“There’s a bunch of predatory birds. There’s a Cooper’s hawk nesting pair that is very active on site. An osprey comes here with his fish and hangs out with his fish on the snags’’ of the scrub pine, she said.
ERM’s recent tour of Lantana Scrub highlighted some of the natural area’s tiniest inhabitants — insects, from silver garden spiders to ox beetles.
“It’s kind of like bird- watching,’’ said ERM analyst Antonio Rodriguez, who used his i-Naturalist app to identify the diverse invertebrates.
“It’s pretty fun to collect a whole bunch of different species, to say you’ve seen it.’’

If You Go
What: Lantana Scrub Natural Area
Where: Adjacent to the Lantana/Lake Worth Health Center at Andrew Redding Road and Southwinds Drive.
Open: Sunrise to sunset; no designated parking, accessible by pedestrian traffic only.
For more information: https://discover.pbcgov.org/erm/NaturalAreas/Lantana-Scrub.aspx