Stretching out on a chaise longue with a Kindle in your hands and the Atlantic Ocean as a backdrop is “a heck of a nice way to spend a day,” said Ron Nyham, a proud member of the Delray Beach Club.
Not that Nyham, outgoing president of the 43-year-old club, can spend all that much time lazing around the seashore. He’s a busy Florida Atlantic University professor, after all. But when he wants to kick back and get away from it all without having to travel farther than across town, he goes to the Delray Beach Club.
Truth be known, Nyham and his wife really don’t indulge in much loafing when they go to the club.
“We’re more athletically orientated,” he said. “We like exercise, sea kayaking and tennis.”
They can do that at the club, too, and have dinner with that same stunning ocean view.
Members have different reasons for coming to the private member-owned club, which sits on 3.5 acres of postcard-pretty ocean front property at 2001 S. Ocean Blvd.
“We have a slogan ‘Something for everyone. Something for you,’ ” said club manager Shane Peachey. Some come to splash in the pool, paddle-board, kayak, play tennis, swim in the ocean, play bridge, participate in the book club. Some come to dine formally in the dining room, or more casually in the Grille Room.
Some come for musical performances, children’s programs, to work out in the gym or have a massage. And they come for the parties, which are very popular.
Amazingly, Peachey said, the club’s 490 members (and another 140 or so as summer members) divide up pretty evenly for the various activities. “You can always get a dinner reservation.”
Marlis Hadeed, who lives nearby in Highland Beach, says she joined for the tennis program.
“I can’t play anymore because I’m facing foot surgery,” Hadeed said. She plays bridge at the club twice a week and, as former president of FAU’s University Club, has hosted several luncheons there, as well. 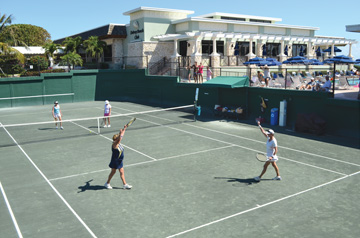 Joy Banton of Delray Beach (left) and Sherry Wolfang of Highland Beach celebrate their win after coming from behind in a doubles tournament in March at the  Delray Beach Club. Weekend events tend to draw a large crowd of friends and onlookers, like the audience below. Photos by Jerry Lower/The Coastal Star Financial adviser Louise Glover, a Delray Beach native, started off with a summer membership after her son, Slane, was born six years ago.
“They have such good children’s activities and kids camps,” she said. “They have a little playground. Slane has friends there.” She and her husband, John, have hosted birthday parties at the club and insists the club “is a destination for the holidays,” with first-rate entertainment.

Founders got traction early
Phyllis Spinner, a Delray Beach resident since 1955 and one of the club’s first members, can relate. The club was a godsend when she was raising her three children in the early days of the Delray Beach Club, she says. Many hours were spent poolside.
“In those days Atlantic Avenue had the Arcade Tap Room and Patio Delray, not all the many restaurants it has now,” she said. “During those early years, club members spent countless hours in the club’s original Grille Room, a smaller more intimate version of its current incarnation. It was, she said, a “cozy, informal room open late at night” and members enjoyed countless hours socializing as a piano player entertained.
Spinner’s late husband, John W. Spinner (everyone called him “Jack”), was instrumental in founding the club in 1969. He practiced law on Atlantic Avenue for 43 years and was the son of a prominent Delray Beach developer, Fred Spinner, who at one time owned a large portion of beachfront property.
Jack Spinner and close friend Bill Plum worked together to start the club. Many of the 10 investors came from Pine Tree Golf Club, where Spinner was a member.
Plum, a pharmacist who had sold his two apothecary shops and medical supply stores and had experience in the banking business, and Spinner, an avid golfer who persuaded many of his Pine Tree friends to invest in the beach club, flew to Baltimore to talk to contractor and land owner Charles A. Mullen about building a beach club on land he owned.
In an effort to gauge interest in starting the club, the men put out one advertisement, Plum, who is now in the real estate business, said. “We got over 150 $200 checks (toward a $500 initiation fee) from people who were interested in joining.” This was before a site had even been finalized.
“By the time the club opened, we had 300 memberships,” Plum said. “It was phenomenal.”
“It took a lot of nerve, time and hard work,” Plum said, “and we had it. The three of us were a good mix.”
Mullen bought and developed the club which was designed by architect Samuel Ogren Jr. Plum was the first manager. The first gala dinner dance was held on Feb. 16, 1970, after construction on the 23,000-square-foot, two-story clubhouse was complete.
Kenyon Investment Group of Greensboro, N.C., purchased the club in 1978, and in 1980, the club became member-owned. Left: Mrs. Fred Spinner and Mrs. Edward Hauter relax beside the pool in 1970. Members find it friendly, caring
Before the club’s $5 million renovation in 2006, summer members Ron Nyham and his wife decided to become full-time members.
“We wanted to participate in voting for and supporting it,” Nyham says. The club, he says, is making changes needed to propel it into the future.
“The demographics are changing,” he said. “I’ve seen a sea of change with more younger members. It’s a much more kid-friendly place.
“We have an unofficial slogan here that ‘the Delray Beach Club will change your life.’ It’s a social club. It’s a place to go for friendships.”
Charles “Buck” Atherton, the new club president, takes it a step further.
“The Delray Beach Club saved my life,” he says. “I went into cardiac arrest on the tennis courts seven years ago and wouldn’t be here today if there weren’t a defibrillator 20 feet away and a waitress trained to use it.”
The life-saving device was purchased by five members in honor of a woman who lost her husband in a similar incident. Paramedics told her at the time her husband might have been saved had there been a defibrillator available. The five members wanted to make sure a device was at the club the next time something like that happened — and they didn’t want to wait.
“Turns out, the next time was me,” Atherton said. “I’d do anything for this club after what they did for me. I’ve never seen such friendly people in all my life.”