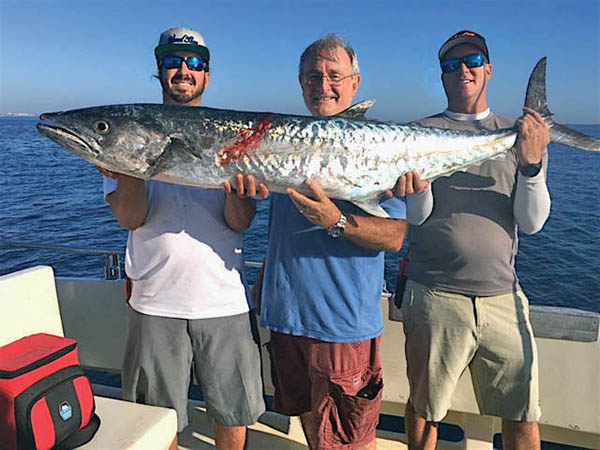 Wayne Riddler, center, with the 52.1-pound kingfish he caught Dec. 14 on the Living on Island Time drift boat. 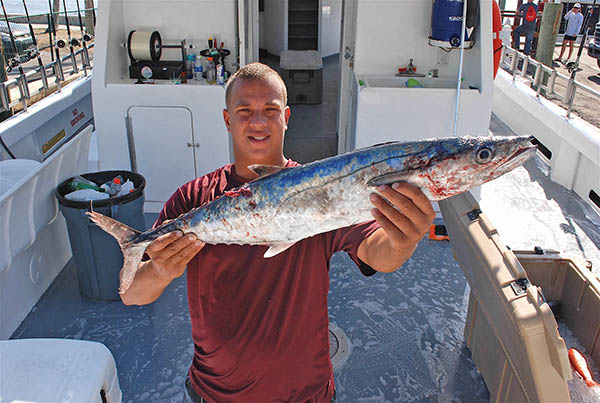 on Dec. 13. The Lady K drift boat is based at Sportsman’s Park in Lantana. 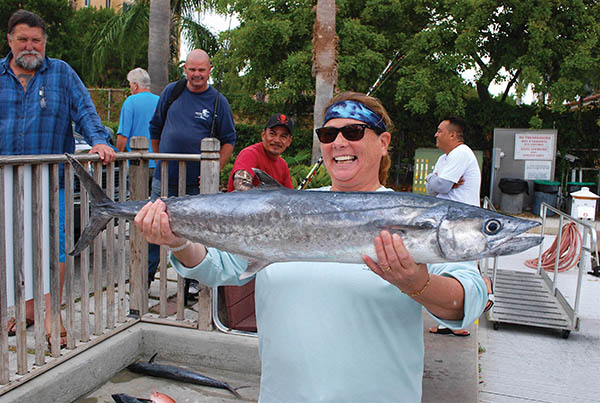 while aboard the Living on Island Time.

When the water temperature drops in more northern latitudes, schools of kingfish move south to spend the winter off South Florida, giving anglers more opportunities to catch hard-charging “kings.”
Good numbers of kingfish were showing up in December in the waters around Boynton Inlet.
Those fishing on the Living on Island Time drift boat, based at Palm Beach Yacht Center in Hypoluxo, were catching kings in about 140 feet of water directly off Boynton Inlet in early December.
Anglers on the two other Boynton-area drift boats — the Lady K based at Sportsman’s Park in Lantana and the Sea Mist III based at Boynton Harbor Marina — also were finding kingfish in December.
Drift boat anglers typically catch kingfish using dead sardines on triple 5/0 hooks rigged with 50-pound-test leader and about an ounce of weight above the leader.
Kingfish are especially fun to catch on live bait such as blue runners, threadfin herring or goggle-eyes that are drifted on the surface, trolled slowly or dangled under a fishing kite.
When they’re feeding aggressively, kingfish have been known to leap out of the water holding baits in their mouths, like dogs with bones.
Kingfish also will strike trolled natural baits and lures such as spoons and jigs.
King mackerel (Scomberomorus cavalla), best known as kingfish or simply “kings,” are notorious bait thieves. They can eat the sardine from a drift-boat rig and miss all three hooks — or eat most of a live baitfish, leaving behind only the part holding the hook.
The kingfish’s sharp teeth should be avoided. Many anglers rig live baits intended for kingfish with wire leader and a trailing “stinger” hook to reduce the chance of losing their rigs to  kingfish.
Kingfish prefer water temperatures between 68 and 78 degrees and often move in schools. When large schools of kings are present along the coast of South Florida, it’s not unusual to see dozens of boats clustered over them.
Most of the winter kingfish caught off Palm Beach County are small. Of course, there are exceptions.
Wayne Riddler caught a 52.1-pound kingfish the morning of Dec. 14 while fishing on the Living on Island Time drift boat.
Riddler’s chubby kingfish hit a dead sardine on a circle hook tied to 40-pound-test leader — a rig intended for snapper — in 155 feet of water north of the Lake Worth Pier.
The fish took a long first run, bending the rod into a U shape, but Riddler was able to bring it back to the boat in about 10 minutes with the circle hook lodged in the corner of its mouth, Capt. Max Parker said.
When fishing for schooling kingfish, Chris Lemieux, a charter captain based in Boynton Beach, tells his customers to cast spinning rods holding 1.5-ounce white bucktail jigs for small kingfish.
Lemieux instructs his anglers to work the jigs back toward the boat quickly with the current to entice hard-striking kingfish.
“They hit like 100 mph,” Lemieux said. “They’re fun to catch.”
Small live baits such as pilchards also work well for winter kingfish if they’re available, Lemieux said.
Kingfish have relatively dark meat with a stronger flavor than, say, snapper. They’re best eaten fresh. Small kingfish are considered better, and safer, to eat than large ones.
The Florida Department of Health warns against eating kingfish 31 inches or longer (measured to the fork of the tail) because of mercury, a toxic metal that accumulates in the flesh.
Women of childbearing age, women who are pregnant and young children should not eat kingfish at all because of mercury, the state health department says.
The minimum size for kingfish is 24 inches, measured to the fork of the tail. The daily bag limit is two.

Crescendo wins Operation Sailfish tournament
The fishing team on Crescendo, led by Capt. Skip Dana of Deerfield Beach, won the Operation Sailfish tournament Dec. 9-10 based at Sailfish Marina in Palm Beach Shores.
Crescendo was tied with three other boats until the final minutes of the tournament. With two minutes left before lines out, the team hooked a sailfish and released it to end the event in first place with 10 releases and earn a check for $239,280.
Crescendo, a 35-foot Revenge owned by Charles Greenberg of Boca Raton, was one of the smallest boats in the tournament. Dana said the team caught most of its fish using live goggle-eyes dangled under fishing kites off Palm Beach and Juno Beach.
Team Contender One finished second, with nine releases. Sandman finished third and Weez in the Keys finished fourth, both with nine sailfish releases (based on the time of the releases).
Overall, 47 boats released 218 sailfish in two days of fishing in Operation Sailfish — the first leg of the Quest for the Crest Sailfish Series (www.questforthecrest.com). The second leg of the series, the Sailfish 400, is set for Jan. 11-15 in Miami.

New limits for mutton snapper, barracuda
The Florida Fish & Wildlife Conservation Commission recently approved size and bag limits to protect populations of mutton snapper and barracuda.
New limits for both fish took effect Jan. 1. There was no size limit for barracuda in the past.
To be legal to keep, a barracuda caught in South Florida must measure between 15 and 36 inches to the fork of the tail. (One barracuda larger than 36 inches can be kept daily per angler or per boat, whichever is less.)
The daily bag limit for barracuda is two per person with a maximum of six per boat.
The barracuda limits apply in state and federal waters of six South Florida counties — Martin, Palm Beach, Broward, Miami-Dade, Monroe and Collier.
Mutton snapper, the popular reef fish, must be at least 18 inches in total length to be legal to keep, an increase of 2 inches from the previous minimum size.
The daily bag limit for mutton snapper is five fish per person within the 10-fish snapper aggregate limit.
For more details about recreational saltwater fishing regulations, go to www.myfwc.com/fishing and click on “saltwater fishing.” 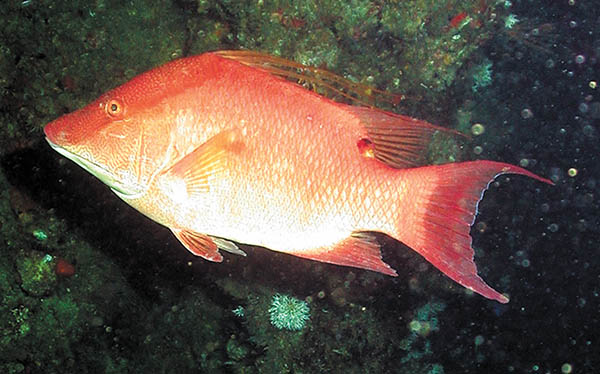 New hogfish limits, closed season in the works
The Florida Fish & Wildlife Conservation Commission recently approved regulations restricting the harvest of hogfish, a tasty member of the wrasse family often targeted by spearfishers.
No effective date for the hogfish regulations in state waters had been set as of mid-December, but they’re likely to take effect later this year.
Hogfish are considered overfished in the Florida Keys and along the state’s east coast.
The FWC in November approved regulations for state waters (up to 3 miles off the east coast) to complement rules approved for federal waters that are intended to help hogfish populations rebound.
Key changes for those targeting hogfish in Atlantic waters and the Florida Keys include:
• Lowering the bag limit from five hogfish to one.
• A 4-inch increase in the minimum size, boosting it to 16 inches (measured to the fork of the tail).
• A closed season during the cool months. The proposed hogfish harvest season is May 1 through Oct. 31.
The FWC plans to issue a news release stating when the hogfish regulations will take effect in state waters. Watch for updates at www.myfwc.com.

Tip of the month
If you happen to catch a sailfish and want to photograph it to show friends and family before releasing it, don’t lift it out of the water.
Two reasons: It might cause the already tired billfish to die after being released. And it’s illegal unless you hold a federal highly migratory species angling permit and plan to put the sailfish in the boat and bring it back to shore.
Here’s what the code of federal regulations says: Atlantic highly migratory fish (including sailfish and marlin) “must be released in a manner that will ensure maximum probability of survival, but without removing the fish from the water.”
NOAA Fisheries’ enforcement staff will contact and warn anglers who post photos of billfish held out of the water on social media, says Ally Rogers, spokeswoman for NOAA’s Office of Law Enforcement.
Instead of lifting the sailfish out of the water, try leaning over the side of the boat (if conditions allow) and photographing the angler near the sailfish that is showing on the surface.
Take time to revive caught sailfish by holding them alongside a moving boat so water can wash over their gills, advises Jason Schratwieser, conservation director for the International Game Fish Association.
Release tips for large pelagic fish can be found at www.nmfs.noaa.gov/sfa/hms/compliance/guides/careful_release_brochure.pdf.

Willie Howard is a freelance writer and a licensed boat captain. Reach him at tiowillie@bellsouth.net.