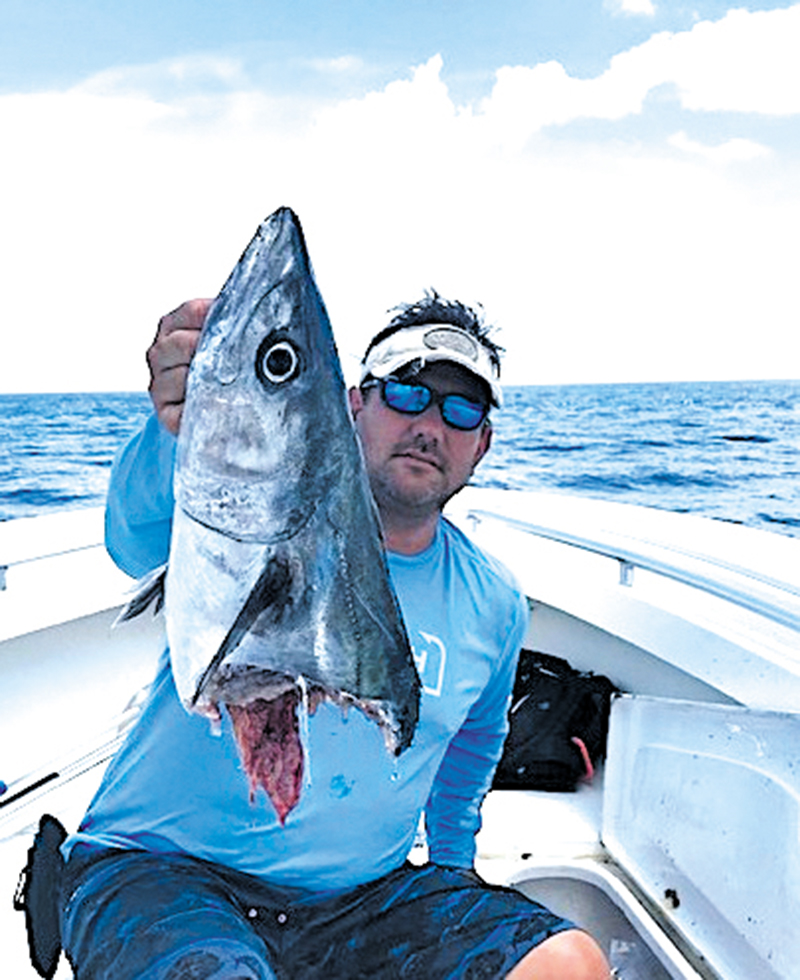 Angler Doug Sarmousakis holds what remains of a kingfish that was mostly eaten by a shark during the Aug. 10 Mark Gerretson Memorial Fishing Tournament. Photo provided by John Miller

Sharks are lingering around fishing boats and eating hooked fish from lines along the coast of Palm Beach County — a familiar problem for South Florida anglers that many captains say is worse this summer than in years past.

“It was clear that local populations of sharks were celebrating Shark Week,” tournament chairman Tim Knapp wrote in his summary of the tournament. “Numerous anglers reported donating their fish to the sharks as they were being reeled in.”

John Miller said his fishing team caught a bull shark and lost a nice kingfish to another shark off Manalapan during the Gerretson tournament.

Capt. Chip Sheehan of Chips Ahoy Charters in Boynton Beach said sharks have been “out of control” in the waters off Boynton Inlet. Sheehan also reported losing half of a large kingfish to a shark during a tournament.

Sea Mist III drift boat Capt. Ryan Carr said the sharks have been stealing fish from his customers’ lines all year. In the past, they seemed to disappear for a few months and return.

Carr said the sharks seem to be most problematic for anglers right in front of Boynton Inlet and north of the Lake Worth Beach pier.

“I won’t even go to my big mutton (snapper) spots right now because I don’t want to feed them to the sharks,” Carr said.

Capt. Tony Coulter, a veteran dive charter operator, said he has seen more than the usual number of lemon and hammerhead sharks in the waters off Boca Raton and Delray Beach this summer.

“We had a thresher shark hanging around for a few weeks here in Boca as well,” Coulter said.

But the number of those smaller sharks is still down from eight years ago, Kajiura said.

Mote Marine Lab spokeswoman Stephannie Kettle said Mote could not confirm the species of sharks that are eating hooked fish or estimate whether South Florida’s shark population is growing based on anglers’ reports.

“It’s important to remind readers that sharks and anglers both want the same thing: tasty fish,” Kettle said. “Sharks follow where the food goes, as do fishermen.”

In the Bahamas, a vacation turned fatal for 21-year-old Jordan Lindsey, a California college student who was bitten by a shark June 26 while snorkeling near Rose Island.

In Florida waters, 26 species of sharks are protected, meaning they must be released.

To take the free shark-education course and obtain a shore-based shark fishing permit, go to www.myfwc.com/sharkcourse. 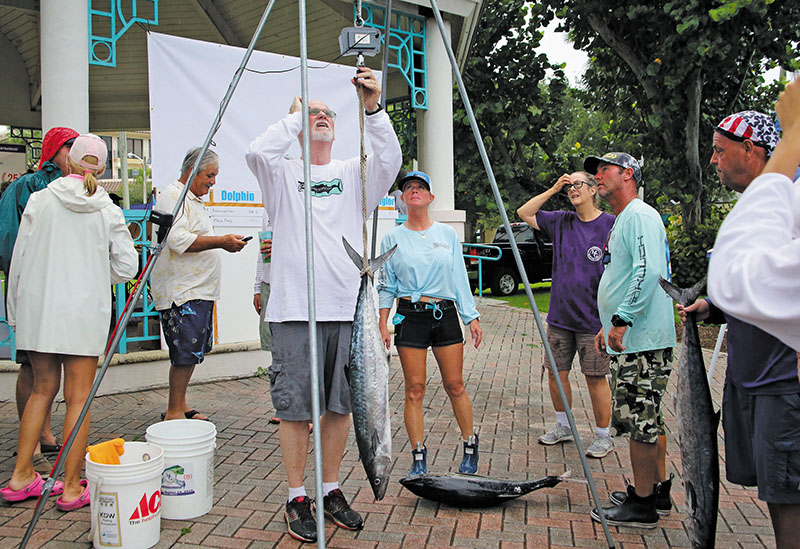 Angela Garber stands beside Jim Gerretson as he weighs a 14.3-pound kingfish that earned her the prize for top lady angler at the Mark Gerretson Memorial tournament. Jim is the brother of Mark, who died in 2005. Tim Stepien/The Coastal Star

Joe Cozzolino of Delray Beach and his fishing team aboard Anticipation won this year’s Mark Gerretson tournament with a 28.4-pound dolphinfish (mahi mahi).

Cozzolino said he and his fishing team ran way offshore looking for dolphin. On the way back toward land, they spotted two small sargassum patches holding dolphin in about 500 feet of water off Palm Beach.

None of the dolphin around the floating weed mat was large enough to hit a live goggle-eye, Cozzolino said. But after they fished the spot for a while, the tournament-winning big dolphin finally came along and hit a goggle-eye.

Cozzolino said his team’s dolphin, caught by Chris Shores, also won the Mariner’s Cove tournament that day because he registered for both tournaments.

No wahoo came to the scale in the tournament, which attracted 19 boats and was based at Veterans Park in Delray Beach.

This was the 25th year for the tournament created by Delray Beach resident and fishing fanatic Mark “Rock” Gerretson, who died in 2005. Proceeds from the  tournament support several causes, including the Delray Beach Police Department’s annual holiday toy drive and scholarships for Atlantic High School students.

State regulators approved a draft rule in July that would create a recreational bag limit for blackfin tuna.

The proposed daily limit: two blackfin tuna per angler or 10 per boat, whichever is greater.

FWC commissioners are expected to hold a final public hearing on the blackfin tuna bag limit during their Oct. 2-3 meeting in Cape Canaveral.

September: Snook season opened Sept. 1 on Florida’s east coast and remains open through Dec. 14. To be legal to keep, a snook must measure between 28 and 32 inches in total length. Bag limit: one snook per person. A Florida saltwater fishing license and snook permit are required, unless you are exempt. Details at www.myfwc.com/fishing/saltwater.

Develop a plan for securing your boat before a hurricane approaches Florida. Tips on where and how to secure a boat and a hurricane preparation checklist can be found at www.boatus.com/hurricanes.

Tags: fishing, on the water, sharks
E-mail me when people leave their comments –
Follow