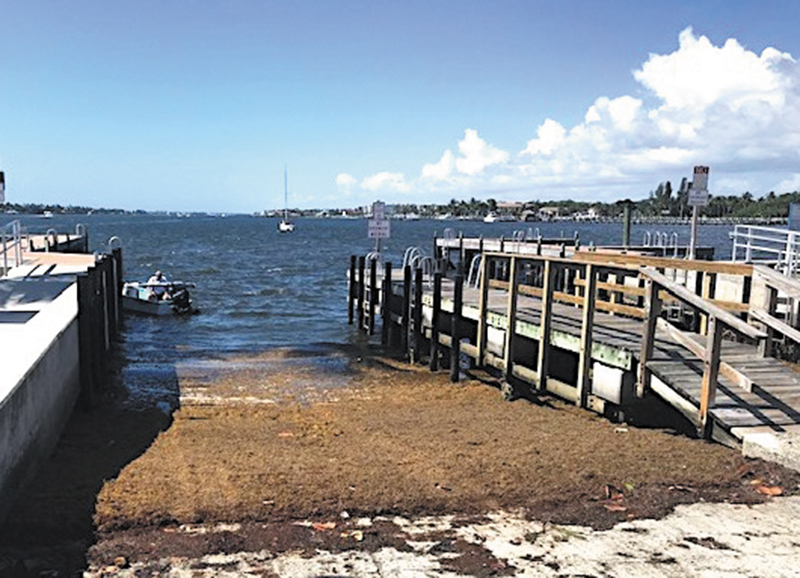 Sargassum blankets the boat ramp at Sportsman’s Park in Lantana. The marine algae made it difficult for boat-towing vehicles to get traction.  Willie Howard/The Coastal Star

Like it or not, the floating marine algae called sargassum is plentiful again this year and could continue to dot the waters of southern Palm Beach County during the warm summer months.

Fishing around scattered sargassum can be frustrating. Clumps gather on trolled baits and lures as well as drifted and live baits, requiring anglers to clear their lines frequently.

Boat captains have been finding clumps of sargassum wrapped around propeller shafts and clogging water intakes.

Boaters who launch their boats at ramps have found their wheels spinning when sargassum washes onto the ramps.

Capt. Bill Cox of the Southern Comfort IV, a charter boat moored at Palm Beach Yacht Center in Hypoluxo, said he sometimes is forced to hit reverse inside the marina to clear the sargassum from the boat’s propeller.

Cox said he removes sargassum from the water-intake strainer every two days or so to ensure the boat doesn’t overheat.

Tournament angler Steve Sprague said he’s been laboriously picking clumps of sargassum from the lead balls of his boat’s downriggers.

Sargassum used to come and go in the waters off South Florida, Sprague said, but nowadays it seems to be around all year.

Trolling the open water of the Atlantic has been difficult this spring because widely scattered clumps of sargassum collect on trolled baits and lures, requiring crews to clean them often, said Capt. Geno Pratt of the Geno V charter boat based in Lantana.

Even live baits dangled from fishing kites have not been immune to becoming covered with sargassum recently, said Capt. Chris Lemieux, whose charter boat is based in Boynton Beach.

“It’s been difficult to deal with,” Lemieux said. “It definitely has been worse in the past couple of years.”

On a positive note, sargassum is floating habitat that shelters small fish and attracts larger predators. When currents sweep the tan-colored algae into a line, trolling the edge of the weed line can lead to catches of dolphinfish, also known as mahi mahi.

Sargassum is natural and has been drifting around in ocean currents for eons, primarily in the Sargasso Sea, an area bounded by four ocean currents. The Gulf Stream current that flows along the coast of South Florida forms its western boundary.

But the “golden tide” of sargassum has been spreading to parts of the Caribbean and Gulf of Mexico since wind and current circulation patterns changed in 2011, said Lew Gramer, a physical oceanographer at the University of Miami’s Cooperative Institute for Marine and Atmospheric Studies.

“There’s now a suggestion that sargassum might have taken up permanent residence in the Gulf and Caribbean, and it’s likely to continue,” Gramer said.

The University of South Florida’s Sargassum Watch System bulletin said the sargassum coverage the central west Atlantic sees in June could be lower than it was last year. But, the bulletin said, this year’s coverage is likely to be higher than in most previous years.

Paddlers set to cross from Bimini on June 15

Paddlers of kayaks, paddleboards and other human-powered vessels will shove off from Bimini on the morning of June 15 and paddle about 75 miles (with support boats) to Lake Worth Beach as part of Crossing for a Cure — a fundraiser to help families affected by cystic fibrosis.

An awards ceremony is set for 10 a.m. June 16 on the beach just north of the pier.

The training class should be available in early June, the FWC says. (Search for it at www.myfwc.com.)

In addition to mandatory education, rules approved by the FWC in February require sharks that cannot be harvested — such as Caribbean reef sharks and hammerhead sharks — to remain in the water when being released, whether caught from land or from a boat.

Anglers targeting sharks, from land or from a boat, will be required to use non-offset, non-stainless steel circle hooks when fishing with live or dead natural bait. Shark anglers will be required to carry a device such as bolt cutters capable of quickly cutting the leader or hook to release the shark.

Chumming from beaches is prohibited under the new rules. 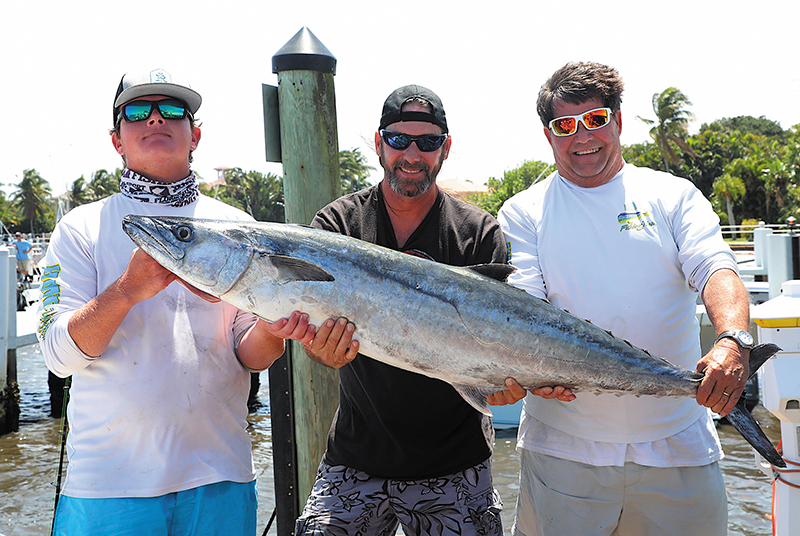 Kingfish dominated the scales during the 25th annual Lantana Fishing Derby, held May 4 with the weigh-in at the Old Key Lime House docks.

Joe Carriker and his HMT Fishing Team won the $2,500 top prize with a 42.5-pound kingfish caught by Ricky Denti.

Carriker said he, Jon Tonnis and Denti were slow trolling a live blue runner behind the Bee Hive 24 HMT in 90 feet of water off Juno Beach when the big kingfish hit around 10 a.m.

Tom Walsh on Kraken was close behind HMT’s winning fish with a 41.8-pound king that won the kingfish division.

The second-heaviest fish in the kingfish division was just three-tenths of a pound lighter than Walsh’s at 41.5 pounds. It was caught by Robert Tonnis on Hoo’s Hoo.

The third-place kingfish, 36.4 pounds, was caught by Michael Mummert on In It To Win It.

Only a few dolphin (mahi mahi) and no wahoo were weighed in this year’s derby, which attracted 54 boats. 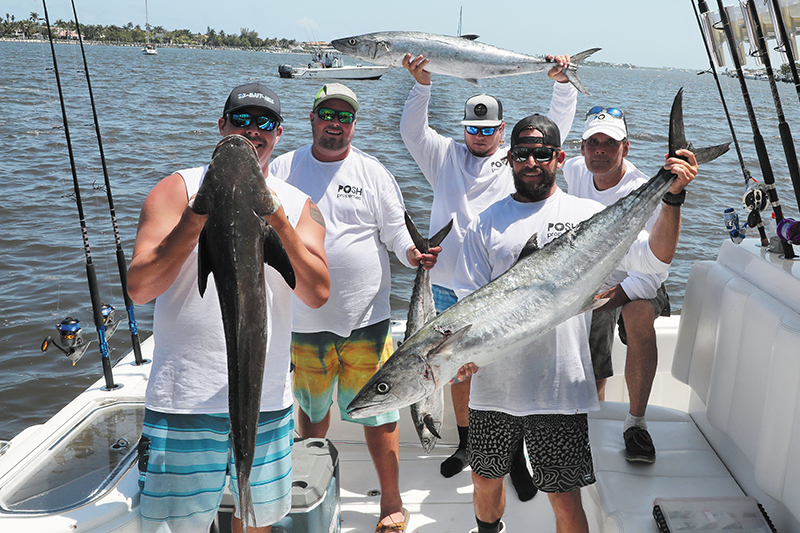 June 1: Boynton Beach Rock the Marina Lionfish Derby at Boynton Harbor Marina. Divers bring their lionfish to the marina to be measured and counted at 2 p.m. Prizes awarded for the most, largest and smallest lionfish. $60 per diver. Call 732-8590.

Ocean anglers looking for fun (and dinner) can fish around floating mats of sargassum for dolphinfish, also known as mahi mahi. When running offshore, look for changes in sea surface temperature, current edges that line up sargassum, floating debris and birds coming down to the surface. Troll artificial lures, rigged ballyhoo, bonito strips or rigged squid. Have pitch baits such as cut sardines, cut squid or live pilchards ready to cast in case dolphin approach the boat. Minimum size: 20 inches to the fork of the tail. Bag limit: 10 per angler.

Tags: boating, on the water, sargassum
E-mail me when people leave their comments –
Follow