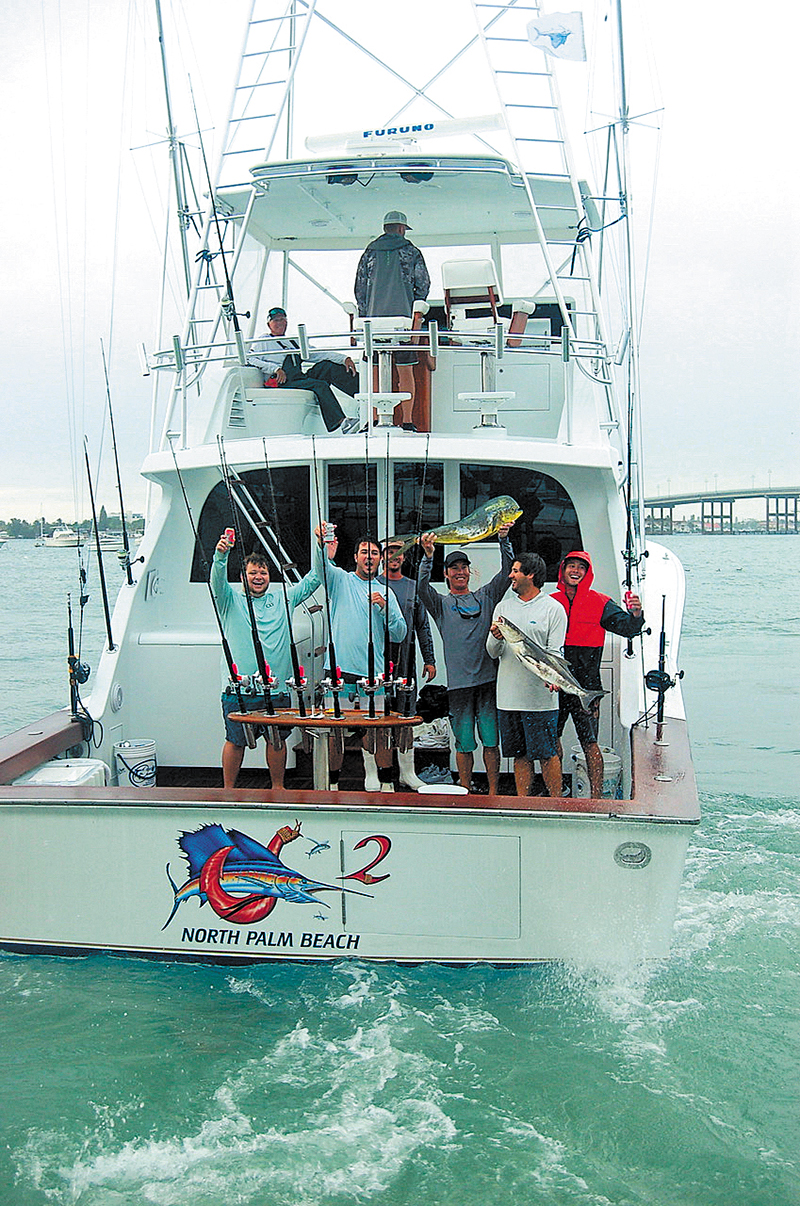 Capt. Nick Carullo of Miami and his team aboard Showtime released eight sailfish in the waters off Boynton Beach to win the Dust’em Off Sailfish Warmup, a multiple-inlet sailfish release tournament that attracted teams from Islamorada to Jupiter.

Fifty teams released a combined 108 sailfish in the Nov. 9 tournament despite a cold front that brought rain, strong winds and heavy seas to the waters off South Florida.

Boats in the Boynton/Delray parade will line up at 6 p.m. near the Palm Beach Yacht Center in Hypoluxo. Boats decorated with holiday lights will proceed south to the C-15 Canal in Delray Beach.

A free watch party with live music is planned at Boynton Harbor Marina. Attendees are each asked to bring a new, unwrapped toy for Toys for Tots.

Other suggested places to watch the parade include Intracoastal Park and Jaycee Park in Boynton Beach as well as Veterans Park and Knowles Park in Delray Beach.

Boat owners and captains can enter the parade for free by downloading an entry form at www.catchboynton.com.

The mandatory captains meeting is set for 6 p.m. Dec. 9 at Banana Boat restaurant at Boynton Harbor Marina. Captains should bring a new, unwrapped toy to the meeting.

Boca Raton’s parade will begin at 6:30 p.m. at the C-15 canal (Delray/Boca line) and proceed south in the Intracoastal Waterway.

Decorated boats are expected to reach their southern destination at the Hillsboro Boulevard Bridge by 8:30 p.m.

Viewing locations include Spanish River Park, the Wildflower property and the west side of Red Reef Park.

Drawbridges will be held open about 45 minutes to allow the parade of boats to move through.

Boaters interested in participating in the parade must enter by Dec. 9. A mandatory captains meeting is set for 6 p.m. Dec. 9 at the Boca Raton Community Center, 150 Crawford Blvd.

More information and a boat entry form can be found at www.myboca.us. Click on “experience Boca” and “special events” to reach the boat parade link or call 561-367-7073. Students from the Marine Conservation Club at Wellington Landings Middle School toss biodegradable drift cards into the Lake Worth Lagoon from a public dock in downtown West Palm Beach. The cards are part of a citizen science project organized by the Angari Foundation and its partners to study currents in the lagoon. Photo provided by Whitney Jackson

The Angari Foundation, a West Palm Beach nonprofit that promotes marine science research and education, released “drift cards” into the Lake Worth Lagoon in early November to study water movement.

It was the foundation’s fifth drift card release in the Lake Worth Lagoon, the county’s largest estuary, which stretches 20 miles from Ocean Ridge to North Palm Beach.

The yellow drift cards were released the afternoon of Nov. 2 in six locations in the lagoon, including one near Boynton Inlet.

The cards are made of thin plywood coated with a nontoxic paint, Angari Foundation spokeswoman Rachel Plunkett said.

Anyone who finds one of the cards labeled “Scientific Study — Please Report Discovery” is asked to keep the card and email a photo of it, including the location, date and time it was found, to lagoondrift@angari.org.

Jan. 1: A new bag limit for blackfin tuna takes effect. The limit is two blackfins per angler or 10 per boat, whichever is greater, in state and federal waters. Also, grouper season closes and will reopen May 1.

Release the crab after removing a claw. Claws should not be taken from egg-bearing crabs.

Crabbers must have a Florida saltwater fishing license, unless exempt, and must complete a free online registration form at www.gooutdoorsflorida.com. A five-trap limit applies to recreational crabbers.