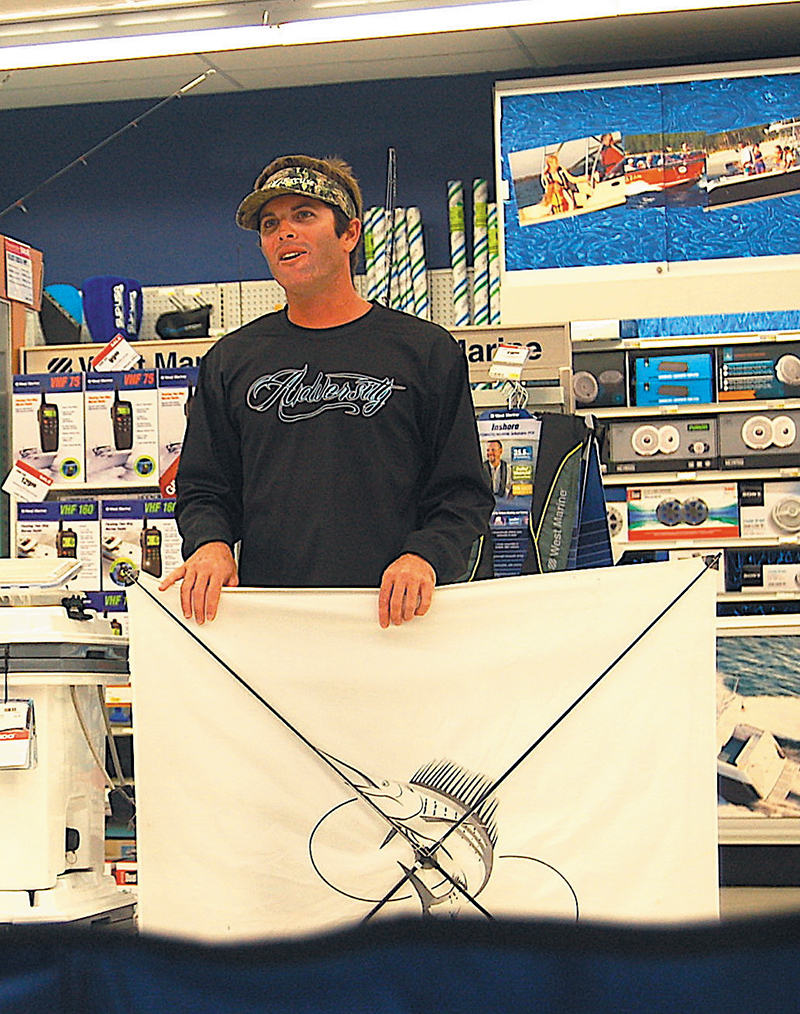 Anyone who has fished the ocean off Palm Beach County — or even observed fishing boats from the beach — has probably seen fishing kites flying near boats.

Dangling live baits under fishing kites was popularized as a way to catch sailfish and other ocean game fish in the 1960s by Capt. Bob Lewis of Miami.

Suspending live baits under kites causes baitfish such as pilchards or goggle-eyes to thrash on the surface, attracting predators.

Fishing with kites also spreads baits out over a wide area and allows anglers to fish both sides of a boat while drifting.

But popular as kite fishing is, proficiency still eludes ocean anglers who don’t have the right tools or have not taken time to master the art.

Capt. Nick Cardella — a Delray Beach native, charter captain and member of many tournament fishing teams — sought to demystify the art of kite fishing by sharing tips during a Dec. 20 seminar at West Marine in Delray Beach. A typical kite rig includes a ring above a brightly colored marker float and a small sinker to hold the float down in the wind.

Some background: Kite fishing consists of flying a fishing kite from a small rod (the kite rod). The line under the kite typically holds three release clips spaced about 65 feet apart. Fishing lines attach to the release clips with small ceramic or metal rings.

Windy winter days can create good conditions for kite fishing. Serious kite anglers carry several kites for a variety of wind conditions and attach helium balloons to their kites to hold them aloft when the wind speed slows.

Here are a few of Cardella’s tips for anglers learning to fish with a kite:

• Match the weight (used under the marker float on the fishing line) to the wind conditions. Cardella will use an ounce or more of weight to hold lines down in stout winds.

• For days with less-than-steady wind, use a heavy-duty balloon (available from tackle shops) filled with helium to hold the kite up. One place to find tanks of helium for balloons is Party City.

• Tie the helium balloon directly to the kite spar. The kite will tend to pull to the opposite side the balloon is attached to. That’s good. When using two kites, attach balloons so that one kite pulls to the left, the other to the right.

• Use a sea anchor to slow the drift and stabilize the boat, especially in relatively rough winter seas. An alternative is to hold the boat into the wind with the engines by bumping them in and out of gear.

• Monofilament leaders and circle hooks are standard tackle for sailfish. But when toothy fish such as kingfish and wahoo are severing leaders, have wire leaders ready. Cardella uses about 30 inches of No. 6 wire and a standard J hook when rigging live baits for toothy fish.

• If you plan to kite fish regularly, consider buying an electric reel for the kite rod. A power reel will save time and cranking muscles when you retrieve the kite.

• Even if you don’t need a helium balloon to keep the kite aloft, attach a regular balloon to the kite. If the kite winds up in the water, the balloon will keep it afloat.

The Fragrant Harbor team — including David and Lynne Henderson, Trent Glaub, Ryan Hullihan, Owen Buckman and Tim Smith — took an early lead on the first day, with nine releases, then caught and released another four fish on Day 2 to win by one release.

The fourth-place team, Singularis led by Capt. John Van Dellen, caught nothing on Day 1 but found the fish and scored 10 releases on Day 2, earning top-boat honors for the second day.

Billed as the oldest sailfish tournament in the world, the Silver Sailfish Derby was started in 1935 by the West Palm Beach Fishing Club and has been held every year since, except during the fuel shortages of World War II. Forty-three boats participated in this year’s 82nd derby.

Teams found most of the sailfish off Cocoa Beach.

A November catch by Kyle Veits and Ashley Ramey — clients of charter Capt. Chris LeMieux of Boynton Beach — demonstrates just how fast these dolphinfish can grow.

The 43-inch bull dolphin, caught Nov. 23 south of Boynton Inlet, had been tagged and released less than six months earlier as part of the Dolphinfish Research Program (dolphintagging.com).

When Capt. Don Gates tagged and released the fish off Cudjoe Key on June 10, it measured only 16 inches. The fish grew 27 inches in less than six months (166 days to be exact).

Lee County had the largest number of reported manatee deaths in 2018 at 182, according to preliminary manatee mortality statistics compiled by the Florida Fish & Wildlife Conservation Commission.

Thirteen manatee deaths were documented in Palm Beach County, including five related to strikes by boats.
Statewide manatee deaths included 121 related to the slow-moving marine mammals’ being hit by boats and other types of watercraft.

Boaters can avoid manatees by obeying slow-speed zones, staying in marked channels and wearing polarized sunglasses that help them see manatees in the water.

Anyone who spots a sick, injured or dead manatee should report it to the state’s Wildlife Alert Hotline at 888-404-3922.

Fishing for sailfish with live bait this winter? Be patient. Just because the reel clicks a few times doesn’t mean a sailfish is hooked.

Wait until the line is going out steadily for a few seconds before tightening the drag.

Most anglers targeting sailfish use circle hooks (required in billfish tournaments). The goal is to snag the circle hook in the corner of the sailfish’s jaw so it can be caught, photographed and released unharmed.

Hold sailfish in the water alongside a slow-moving boat, allowing water to wash through their gills, until they regain strength and are ready to swim free.

Tags: fishing, kite fishing, mahi, on the water
E-mail me when people leave their comments –
Follow