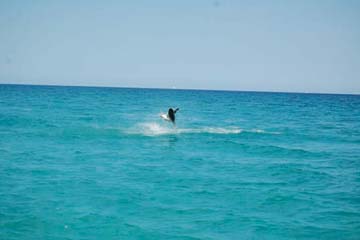 A spinner shark twirls above the surface in shallow water off Palm Beach.

One of the greatest nature shows of the year occurs during late February and March when sharks by the thousands move along Palm Beach County’s beaches.

The sharks — mostly blacktips with a few spinner sharks mixed in — are following schools of small fish that move north in  shallow water as the water warms.

Capt. Tony Coulter of the dive boat Diversity, which runs out of Boca Raton Inlet, said the annual spring shark migration usually begins in late February and continues through the first half of March.

Migrating sharks often cruise the shallows about the same time many winter visitors are enjoying a respite from the snowy North by swimming at our beaches.

Although blacktip sharks have been known to bite humans, most of the bites occur in murky water, where a shark is more likely to mistake a hand or a foot for a fish, said Stephen Kajiura, an associate professor of biological sciences at Florida Atlantic University, who has been studying the shark migration since 2011.

Houston Park, a lifeguard at Phipps Ocean Park in Palm Beach, offered that “when it’s nice clear water, it’s very rare to get bitten by a shark.” Nonetheless, lifeguards usually close the beaches to swimmers (look for the double red flags) when sharks are moving along the beaches in big numbers.

“There are times when they are migrating through, and we seem to be closing beaches multiple times during the day or week,” said Phil Wotton, a captain with Palm Beach County Ocean Rescue.

The migrating blacktips tend to mill around, moving north and south, during February, Kajiura said. As the water warms in March, they move north.

It’s not clear what the migrating sharks are feeding on, Kajiura said. FAU is planning to study their diets. But he said the sharks seem to be feeding on finger mullet and other small fish in shallow water near the beach.

FAU researchers have counted more than 12,000 sharks during a 30-minute flight from Boca Raton to Jupiter, but Kajiura said the actual number is much larger because the aerial survey covers only a narrow band of water from the beach to about 200 yards offshore.

“We know that’s a gross underestimate as we can see additional sharks on the seaward side of the plane, which are not counted,” Kajiura said. “The actual number at any given time is easily double the number we count close to shore.”

Even if observers don’t look closely enough to see the many dark splotches moving a foot or two below the surface (polarized sunglasses help), beachgoers can’t miss leaping spinner sharks.

As their name implies, spinner sharks leap from the water and twirl like Olympic divers before landing with a splash, a behavior that helps them feed.

When pursuing fish such as mackerel and herring, which they swallow whole, spinner sharks charge from below and twirl, often going airborne.

The 30th annual show will feature more than $1 billion worth of yachts and boats along with fishing and diving gear, marine electronics and nautical clothing.

Free instruction at the boat show includes the IGFA School of Sportfishing seminars for adults, and kids fishing clinics presented by Hook the Future.

Admission is $20 for adults or $10 for youths 6-15 at the gate. Tickets purchased online cost $2 less. Children under 6 will be admitted free.

For more information, including parking and transportation maps, go to showmanagement.com or call (954) 764-7642.

Tip of the month: Fish offshore for blackfin tuna and amberjacks, and try casting from the beach for large bluefish.

“I’ve always loved March,” said Capt. Bruce Cyr of the Lady K drift boat based in Lantana. “It’s a month of mingling species, some heading north and others going south, so every day of fishing can bring a surprise.”

Try fishing with dead sardines for blackfin tuna from one of the three walk-on drift fishing boats that reach the ocean through Boynton Inlet. Amberjack tend to hold over wrecks such as the many artificial reefs accessible from Boynton and Boca Raton inlets.

For bluefish, try walking the beaches (or fish from the Lake Worth pier) with a stout spinning rod and a heavy casting spoon to reach blues that could be cruising the shallows.

When fishing from the beach, be sure to bring a backpack with water, pliers for removing hooks, a measuring device and spare lures and leader material along with a saltwater fishing license. Don’t fish around swimmers or in guarded swimming areas.