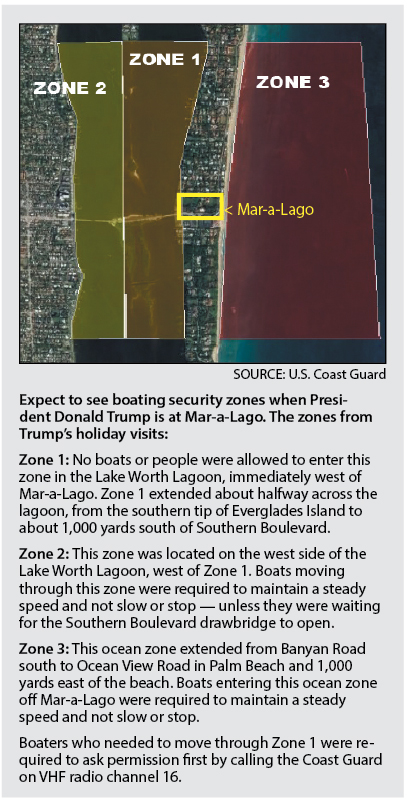 Boating the waters near Mar-a-Lago was restricted when then President-elect Donald Trump visited his luxurious estate in Palm Beach for the holidays during late December and early January.
Boaters enjoying the waters near the Southern Boulevard Bridge probably noticed the orange Coast Guard boat with a machine gun mounted on the bow stationed in the Lake Worth Lagoon just west of Mar-a-Lago.
Offshore boaters might have noticed the Coast Guard cutter in the ocean east of Mar-a-Lago.
But it’s not clear how many boaters were aware of the three “security zones” on the water established by the Coast Guard and other law-enforcement agencies to protect Trump.
The Coast Guard announced the zones with a press release and with postings on its Twitter and Facebook accounts. (Search for U.S. Coast Guard Southeast on Facebook and use @uscgsoutheast on Twitter.)
The Coast Guard will not say whether the same security zones will apply whenever Trump comes to Mar-a-Lago, but it’s safe to say that some sort of boating zones are likely.
Penalties for violating the boating security zones included a civil fine of $88,000, a criminal penalty of up to $10,000 and/or imprisonment of up to 12 years, according to the Coast Guard.
No boaters were found in violation of the boating zones when Trump visited over the holidays, according to the Coast Guard’s District 7 public affairs office in Miami.
“Several boaters were reminded of the security zones, but there were no repeat offenders that resulted in fines,” said Eric Woodall, a Coast Guard public affairs specialist.

Bahamas requires license, guides for flats fishing
Anglers ages 12 and over intending to fish flats in the Bahamas for bonefish, permit and other shallow-water fish must first buy a license.
The Bahamas Ministry of Tourism recently announced the flats fishing license requirement, effective Jan. 9.
A “personal angler’s license” is $15 daily, $20 weekly and $30 monthly. Annual nonresident licenses cost $60. Also, a certified guide must be hired for every two anglers.
The new regulations were called “unnecessary and counterproductive” by the Abaco Fly Fishing Guides Association.
The regulations define “flats” as areas with 1 to 6 feet of water with habitats such as sand, mud and mangroves.
Bonefish, permit, tarpon, snook and cobia caught on the flats must be released under the regulations.
Bahamians can keep one flats fish daily for personal consumption, but Americans and other visitors must release all fish caught on the flats, said Richard Treco, a manager with the Bahamas Ministry of Tourism office in Plantation.

The regulations ban commercial fishing on the flats.
Applications for a personal angler’s license must be submitted in hard copy (until an electronic processing system is established) at administrators’ offices throughout the Bahamas. For visitors, they must be stamped at the port of entry.
Many guides and lodges are buying licenses ahead of time for their clients as a service, said Cindy Pinder, secretary of the fly fishing guides association.
“Rollout of the licensing scheme before the online mechanism was in place was a foolhardy decision on the minister’s part,” Pinder said.
Penalties for violating the Bahamas flats fishing regulations include fines of up to $5,000, up to three months in jail (or both), as well as possible forfeiture of boats, fishing gear and vehicles.
For more information, go to www.Bahamas.com/fishing or call the Bahamas Tourist Office in Plantation, (954) 236-9292.

Fishing poetry contest
South Florida fishing fans will have a chance to test their skills at writing poems based on the Delray Beach Historical Society’s Fish Tales! exhibit.
The free poetry contest based on the popular exhibit is being organized as part of the Palm Beach Poetry Festival.
Contest organizers suggest that contestants first visit the Fish Tales! fishing history exhibit, then write a poem of up to 30 lines for the contest, inspired by the exhibit.
Only one poem per person will be reviewed. The deadline for submission is March 1. Winners will be announced in April.
Prize for the best poem: $100. Four $25 prizes also will be awarded. The 10 best entries will be published online.
For details on the poetry contest, visit: www.palmbeachpoetryfestival.org/news/fish-tales-poetry-contest/
Winnie Edwards, the historical society’s executive director, said the Fish Tales! exhibit has attracted about 2,000 people and will remain open through late spring.
The exhibit features more than 300 historical photos of fishing, diving and related events, along with antique rods, reels, fishing tackle and diving gear.
It’s open 11 a.m. to 3 p.m. Thursday, Friday and Saturday at the Delray Beach Historical Society’s campus, 3 NE First St., Delray Beach.Admission is free. Donations are appreciated. 274-9578 or www.delraybeachhistory.org.

Double Take wins
Silver Sailfish Derby
The Key Largo-based fishing team on Double Take, led by Capt. Mike Laufle, released nine sailfish to win the 80th annual Silver Sailfish Derby, a sailfish release tournament hosted Jan. 5-6 by the West Palm Beach Fishing Club.
The Juno Beach-based fishing team on Goin’ Raptor, led by Capt. Will Sabayrac, also posted nine releases for the tournament but finished second overall based on the time of the releases.
Capt. Jamie Ralph and his team on Pro Payroll, based in Lantana, finished third with eight releases.
Fishing was relatively slow. Anglers on 40 boats released 153 sailfish in two days of fishing — down from 166 sailfish released by 37 boats in the 2016 Derby.
But when winter winds kicked up heavy seas a few days later, it stoked the sailfish action in the 45th Annual Gold Cup Invitational Team Fishing Tournament, held Jan. 8-12.
A record 448 sailfish were released by 21 boats in three days of fishing during this year’s Gold Cup.
Heavy seas kept most at the docks in the first day of the tournament, but on the second day 20 boats released 199 sailfish, a one-day tournament record.
Capt. Jon Brooks and his fishing team on Ditch Digger won top boat and took home the Gold Cup trophy, with 38 sailfish releases posted in three days of fishing.

Fly fishing for billfish
Renowned billfish angler Nick Smith will speak on fly fishing for sailfish and marlin Feb. 22 at the West Palm Beach Fishing Club.
Smith is a lifelong blue-water angler who won the fishing club’s Donald S. Leas III International Angling Trophy for numerous sailfish and marlin releases on fly during 2016.
The free speaker meetings, held the first and fourth Wednesdays of most months, begin at 7 p.m. in the club’s headquarters at 201 Fifth St. in downtown West Palm Beach.
At the March 1 meeting, angler Rich Vidulich will share methods and locations for catching pompano.
For more information about the fishing club and upcoming speakers, go to www.westpalmbeachfishingclub.org or call 832-6780.

Tip of the month
Snook season opened Feb. 1 and will remain open through May 31 along Florida’s east coast.
Spring can be a great time to catch snook at spillways, at fishing piers, inlet jetties and from boats in the Lake Worth Lagoon.
Snook are both beautiful and delicious, but anglers should brush up on the state’s strict snook regulations before heading out to fish for the popular silver fish with distinctive black lateral lines.
To be legal to keep on the state’s east coast, snook must measure between 28 inches and 32 inches in total length. The daily bag limit is one snook.
No multiple-pronged hooks may be used to take snook when fishing with live or dead bait. Spearing snook is prohibited.
Anglers who plan to keep a snook must have a snook permit in addition to a Florida saltwater fishing license — unless they’re under age 16, Florida residents age 65 or older, or otherwise exempt from the license requirement.
When fishing for snook, be sure to have a measuring device ready. Because so many snook are not of legal size, anglers should think ahead about how they will handle them before they’re released.
Keep snook in the water as much as possible. For photos, ready the camera before lifting them out of the water for a few seconds — or photograph them in the water. Support snook under the belly when lifting them, and lower them gently back into the water.
Try using non-offset circle hooks to reduce the chance of deep-hooking snook, especially when fishing with live bait. Consider flattening the hook barbs on lures used to target snook.

Willie Howard is a freelance writer and a licensed boat captain. Reach him at tiowillie@bellsouth.net.