ABOVE: Eric Brandon of Nautical Ventures folds down the transom bench seat on the Blackfin 272 center console he displayed at the Fort Lauderdale International Boat Show in November. The bench is a comfortable place to sit that would be an obstruction to anglers if it didn’t fold flat against the transom. BELOW RIGHT: For passengers who enjoy lounging when they cruise, the optional 170-quart “coffin box” cooler with pad and removable backrest dress up the Crevalle 26 Open bay boat. Photos by Willie Howard/The Coastal Star 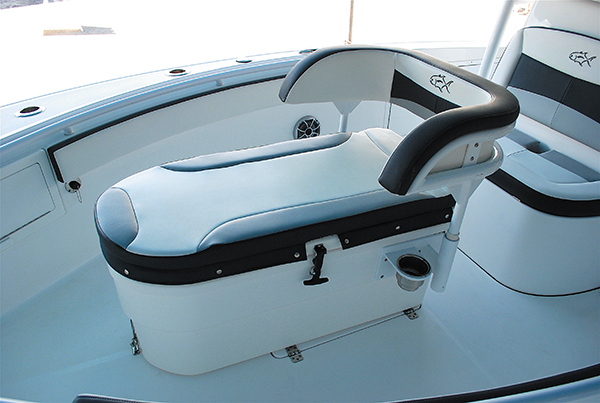 Powerboat designers are adding creature comforts to center console boats, hoping they will appeal to buyers who want oceangoing fishing machines that double as platforms for family outings.
Several of those fishing/family boats were on display during the 58th annual Fort Lauderdale International Boat Show in early November — as were replicas of vintage boats and luxury boats powered by multiple outboards.

Some examples
The Blackfin 272 center console — a fast, oceangoing fishing machine that comes with fishy features such as outriggers mounted to a hard T-top, a 30-gallon live bait well, below-deck fish boxes, tackle drawers, a bait-rigging station and under-gunwale rod holders.  Creature comforts that don’t detract from the boat’s fishability include a foldaway transom bench seat, removable, forward-facing backrests for the bow seats, a removable table for lunch breaks and a soft shade top for the bow, which can be easily removed for storage. The boat show price: $179,000.
The Crevalle 26 Open, a bay-style fishing boat that can be purchased with a full upper station, meaning you can run the boat from a perch on top of the T-top, where the visibility is much better than it is from the deck. That’s great for finding fish. But the Crevalle’s optional 170-quart “coffin box” style cooler with removable backrest and stylish pad also make the bay boat appealing for family cruising. A freshwater shower, optional extended swim platform, an in-console portable toilet and optional pylon for towing water skiers make the Crevalle suitable for a variety of water activities. Boat show price: $103,900.
The Cobia 301 center console features an inward-opening side door (with removable boarding ladder) for easy entry and exit when swimming, snorkeling or diving. The side door also can be opened for dockside boarding and for hauling big fish aboard. Like the Blackfin, the Cobia features a foldaway transom seat and plush forward seating with a removable table for picnics in the bow. The Cobia’s roomy head (toilet) area inside the center console includes a freshwater sink, vanity mirror and towel bar. The boat show price: $179,900.
With a base price tag over $1 million, the Formula 430 All Sport Crossover is not your typical outboard powerboat. Pushed by a team of four 400-horsepower Mercury outboards, the Formula on display at the boat show could reach a top speed of more than 60 mph. Comfort features include a sleeping berth and forward lounge, two refrigerators, a huge stern platform for easy access to the water and a galley with a stove. Slide-in racks convert the 52-gallon live bait well into a scuba tank compartment. Options include a satellite television system, stand-up paddleboard racks and a Seakeeper stabilizer. The boat show price: $1,058,300. 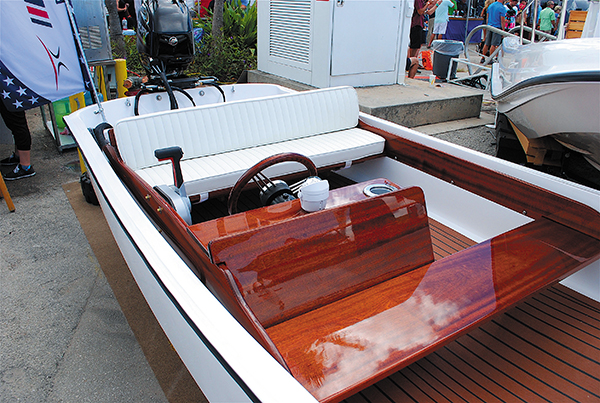 Metan Marine’s mahogany-trimmed, 13-foot Tender Series boats at the Fort Lauderdale show are based on the classic Boston Whalers.

For nostalgic boaters who long for classic crafts that were popular in the 1960s and ’70s, Massachusetts-based Metan Marine offered replicas of early Boston Whalers at the boat show.
Billed as a classic tender for a larger boat, the 13-foot Metan on display at the show featured mahogany seats and PlasDeck teak decking. The Mercury outboard engine was modern, but it could be disguised with a vintage cowling for that out-of-date look.
Company President Mike Borrelli said he started out restoring old boats, a venture that became so popular he started building them from scratch. Metan plans to build replicas of two Bertram classics, 26 and 32 feet, early next year. Boat show price for the 13-foot Metan, 40 horsepower Mercury outboard and trailer: $25,000. Irma caused $500 million in boat damage
When Hurricane Irma swept across Florida in September, it damaged or destroyed about 50,000 recreational boats, causing an estimated $500 million in damage.
Boat damage could have been much worse, according to the Boat Owners Association of the United States, also known as BoatUS.
“While locations in the right front quadrant of the storm such as Big Pine Key and Marathon were hit hard with a Category 4 storm, Irma lost strength as it approached the mainland,” said Rick Wilson, vice president of claims for BoatUS marine insurance.
Recreational boat losses from Hurricane Harvey in Texas were significantly lower, at 13,500 boats with an estimated value of $155 million.

Coming events
Dec. 2: Basic boating safety class offered by Coast Guard Auxiliary, 9 a.m. to 5 p.m. in the headquarters building at Spanish River Park, 3939 N. Ocean Blvd., Boca Raton. Fee $35 for adults or $20 ages 12 to 19. Register at the door. Bring lunch. Call 391-3600 or email fso-pe@cgauxboca.org.
Dec. 8: The Boynton Beach & Delray Beach Holiday Boat Parade. Decorated boats will line up at 6 p.m. at the Ocean Avenue Bridge near the Old Key Lime House restaurant in Lantana and proceed south to the C-15 Canal at the border of Delray Beach and Boca Raton. Music begins at 6 p.m. at Boynton Harbor Marina. The parade is scheduled to start at 6:30 p.m. Donations of new, unwrapped toys are being collected for children. For viewing locations and a parking map, call the Boynton Beach CRA at 600-9097 or visit www.catchboynton.com. In Delray Beach, call 243-7250.
Dec. 22: Early-entry deadline for the 81st annual Silver Sailfish Derby, a sailfish release tournament organized by the West Palm Beach Fishing Club. Captain’s meeting Jan. 10 followed by fishing Jan. 11-12 and an awards dinner Jan. 13. Entry fee $1,000 per boat for club members by Dec. 22 and $1,500 for non-members. Call 832-6780 or go to www.westpalmbeachfishingclub.org.

Tip of the month
Divers who enjoy spearing tasty hogfish should remember that the recreational hogfish season is closed in state waters along the east coast as well as in the Florida Keys and on the west coast south of Cape Sable.
The hogfish harvest season will reopen May 1.
Recreational harvest of hogfish is still allowed in state and federal waters north of Cape Sable in the Gulf of Mexico.
For details, go to www.myfwc.com. Click on saltwater fishing, recreational regulations and hogfish.