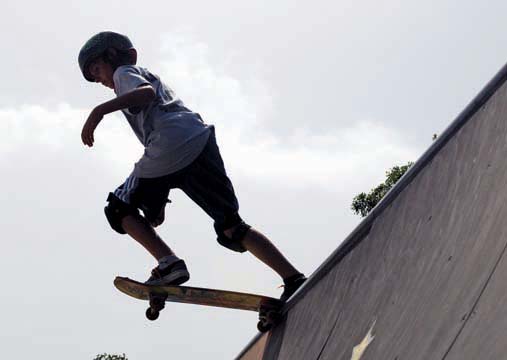 Luke Hemsher, 7, of Boynton Beach, takes off from a ramp at Hobbit Skate Park at the 505 Teen Center in Delray Beach.
Photos by Taylor Jones/The Coastal Star

It seems parents are always wondering what to do with the kids for the summer.
Wedged between north- and south-bound Federal Highway in the building that once housed the Woman’s Club of Delray Beach, the 505 Teen Center and Hobbit Skate Park are cool places to cool off and learn new skills during the heat of summer.
Danielle Pearson has supervised the activities at the 505 for seven years. During the summer months, she and five other recreation specialists run a skate camp for kids ages 5 to 13 that features skating lessons every morning and field trips every afternoon. They usually travel to other skate camps and parks, but in July the campers spent an afternoon in an icy theater on opening day of the new Minions movie.

“We also run camps during winter and spring breaks, and day camps anytime school is closed,” Pearson said. The center has six staff members who share the responsibility for the kids at the center. “It’s the collaboration of the six of us, working together to help the kids,” Tony Chin said. Chin, 33, has been working with kids at summer camps since he was old enough to be a counselor, first with his church and now at the 505 Teen Center.
“It takes a lot of patience,” Chin said. “There are a lot of personalities, and every one of them is different. They keep me on my toes.”
For the last five years, Chin, who has two kids of his own, has been a full-time supervisor. He’s proud of his accomplishments. “I didn’t think it was my destiny because I have a lot of hobbies, a lot of interests, but when I started, I found it was my calling.”

Chin understands the need for male role models and he’s proud to be one for the kids who come in off the streets. “We talk to them about staying in school. The hardest part is getting and keeping their attention so they can get the message and how important it is.
“We mold them. We try to get them to think three to five years ahead to see how what they’re doing now can affect their future.”
They’re a family to kids who don’t have one — or whose parents are super-busy just trying to survive financially — so the staff is teaching them life skills as well.
At least once a week you can find Fred Self, a science teacher at Carver Middle School during the school year, in the kitchen surrounded by kids, teaching them knife skills and the proper seasoning for chicken and ribs.
“Cooking is my passion,” Self said. “I try to focus on healthy foods, fruit salads and vegetables. I want to break their dependence on McDonald’s. I also focus on things they can make at home themselves, like spaghetti.”
Self says it gives him another way to connect with the kids. If it takes sticky-sweet apple pie tacos, which he made with the kids in July, Self is up for the challenge.
Rohan Sutherland, 39, a counselor at the 505 for three years, said it’s hard for some kids to find someone to relate to and understand them. His 10-year-old daughter has made him a good communicator. “I listen first,” he said. “Then I ask questions.”
He says he wishes parents knew that even a few minutes of their time can make a world of difference to a kid. “Twenty minutes of quality time; you have to find the time for it. And a little affection.” 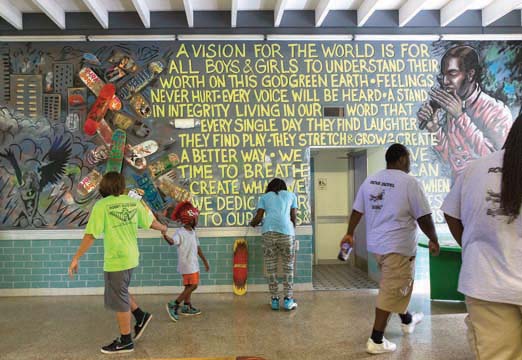 Derek Groissl is the youngest staff member at 24. “I’ve been coming here since the park opened,” Groissl said. “It seems like there’s less stuff for kids to do these days.”
A gifted athlete, he’s the skate park supervisor now, overseeing 10,000 square feet of skating challenges including a half-pipe, quarter pipe, fun box and grind rails.
He remembers Jason “Hobbit” Weinstein, for whom the park was renamed in December 2008. Weinstein, who drowned while surfing in September 2008, was a stickler for safety, and he often spoke to the kids about the importance of wearing a helmet and pads.
“It’s funny,” Groissl said. “I remember the counselors talking to me when I was a kid, and now I’m talking to kids about life, and doing good things, and keeping their grades up. I tell them, ‘Whatever your dreams are, don’t give up. Stay focused.’ ” He pauses to brush his long hair off his face. “You live and you learn and you pass it on.”
St. Pierre Antoine has been working at the center for seven months, a part-time gig while he finishes school at ITT Tech. He says life has given him a lot of opportunities to mentor kids and he says he can see them change when he’s actually able to reach them. “I had the same insecurities myself, but I try to tell them, don’t let it bring you down. Life is about making mistakes. Through our struggles, we learn.”
The center has a professional-grade recording studio where Antoine teaches kids the basics of audio engineering. It’s a hard-to-find opportunity for children who have tremendous creative muscle but no place to exercise it.
Antoine also says that  “learning goes both ways. We have to stay receptive, and let kids know adults can understand what they’re going through. It all goes back to communication.”
Tyler Villegas, 14, of Boynton Beach, has been coming to the park since he was 7 years old. “If I wasn’t here, I’d be at my house, bored,” Tyler said. “It’s fun. There’s stuff to do.” 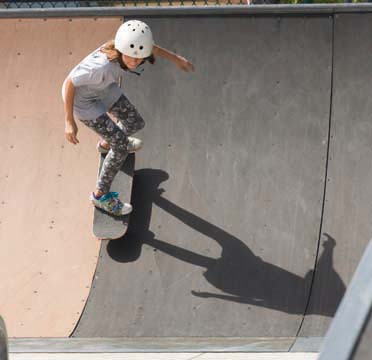 Ella Jacobs, 13, of Delray Beach, skates down a ramp at Hobbit Skate Park

Tyler used to really love skating, but he kind of lost interest in the sport; however,  the center is still a go-to place with more to offer. There are pingpong and pool tables, a video game room and basketball courts.
For the adults working with these kids every day, it’s a labor of love. “You don’t do it for the money,” Self said. “It’s about being able to connect with the kids, to make an impact, to make them better.”
Antoine agrees. “Mostly it’s a place where you can hang out and be yourself.”
Yearly memberships are required to use the center and the skate park. The fee is $10 for Delray Beach residents, and $20 for nonresidents. Get an application at the center or online at www.mydelraybeach.com. A parent or guardian is required to register anyone younger than 18. A waiver is also required to use the skate park.

For information about the park, teen center and its programs, call 243-7158.